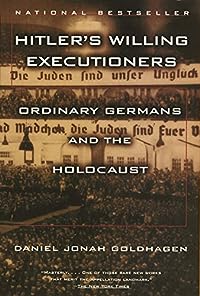 Daniel Jonah Goldhagen has revisited a question that history has come to treat as settled, and his researchers have led him to the inescapable conclusion that none of the established answers holds true. That question is: "How could the Holocaust happen?" His own response is a new exploration of those who carried out the Holocaust and of German society and its ingrained anti-semitism - and it demands a fundamental revision of our thinking about the years 1933-1945.Drawing principally on materials either unexplored or neglected by previous scholars, Goldhagen marshals new, disquieting, primary evidence - including extensive testimony from the actual perpetrators themselves - to show that many beliefs about the killers are fallacies: They were not primarily SS men or Nazi Party members, but perfectly ordinary Germans from all walks of life, men (and women) who brutalized and murdered Jews both willingly and zealously.And they did so, moreover, not because they were coerced (for, as he shows irrefutably, so many were informed by their own commanders that they could refuse to kill without fear of retribution)...not because they slavishly followed orders (a view seemingly supported by Stanley Milgram's famous Yale "obedience experiment")...not because of any tremendous social, psychological, or peer pressure to conform to the behaviour of their comrades (for no such evidence exists)...and not for any reasons associated with Hannah Arendt's disputed notion of the "banality of evil." They acted as they did because of a widespread, profound, unquestioned, and virulent antisemitism that led them to regard the Jews as a demonic enemy whose extermination was not only necessary but also just.Again and again, it is the killers' own words that give us a portrait, both shocking and immediate, of their world: the organization of their daily lives, how they did what they did, their reactions to it, even their recreations in the killings fields, which included everything from sports and entertainment to the hobby of taking snapshots of their deeds and victims - to be freely exchanged and collected among themselves - leaving a devastating record of self-indictment that the author reproduces here.All of Goldhagen's documentary evidence is set within a fresh analysis of the phenomenon of German antisemitism itself, which revises many conventional views. He shows that it was already deep-rooted and pervasive in German society before Hitler came to power, and that there was a widely shared view that the Jews ought to be eliminated in some way from German society. When Hitler, ultimately, chose mass extermination as the only "final solution," he was thus easily able to enlist vast numbers of Germans to carry it out.… (more)

LibraryThing member TTAISI-Editor
There's really nothing like a book that condemns an entire nation--no real exceptions--as murdering anti-Semites. Goldhagen's book is an important contribution to the field of holocaust studies, not because it is so correct but because it demonstrates so clearly the limits of using the holocaust to
Show More
glorify some and vilify others.
Show Less
12 more
LibraryThing member eowynfaramir
I like that Goldhagen delineates his thesis and methodology clearly in the opening chapters. I have read other reviews here that I believe are negative because they feel that Goldhagen draws with too broad a brush. In fact, one reviewer asked why, if Goldhagen's thesis is correct, there haven't
Show More
been hundreds of Holocausts. Well, there have been hundreds of pogroms throughout Europe. I'm not saying that the other reviewers are wrong. It is interesting that Goldhagen seems to have hit a nerve in many readers. That in itself is probably worth recommending this book. I recommend it on its merits. When it came down to it in Europe in the 30s and 40s, Jews were sacrificed willingly by hundreds of thousands of non-Jews while millions of other non-Jews either cheered or looked away.

I will quote from a letter from Goldhagen in response to criticism: "Whatever it might mean to “indict an entire culture,” the assertion that I do it is wrong. All I do is conclude that German culture before and during the Nazi period was broadly and deeply anti-Semitic. In principle, that is as legitimate as is reporting that the culture of the white antebellum South was broadly and deeply racist against blacks."

I agree with Goldhagen and I feel that some critics are expecting too much for Goldhagen to be "evenhanded" on the issue. It is not Goldhagen's responsibility to find out and report on the few Germans who vigorously resisted the Nazis. It is also not Goldhagen's responsibility to write at length about non-Germans who persecuted Jews.
Show Less
LibraryThing member DebbieMcCauley
Daniel Jonah Goldhagen (b. 1959) has revisited the Holocaust and debunked the myth that Germans were opposed to the persecution of Jews and that those who killed did so reluctantly. Previously neglected primary documentation is explored providing the evidence to back up his claim: Hitler had no
Show More
problem enlisting the help of vast numbers of Germans to carry out his ‘final solution,’ that it was not just the SS or Nazi Party members that willingly took part. Ordinary men and women took part in staffing and overseeing the concentration camps, slave labour camps, genocidal army units, police battalions, ghettos and death marches. The zealous murder of the Jews was in part carried out because of a history of anti-Semitism dating as far back as the 18th century. Goldhagen estimates that hundreds of thousands of Germans were directly involved in the mass murder and millions more were aware on the ongoing genocide justified by the belief that what they did was right and proper.

This book is both compelling and terrifying. It is comprehensive, but I found the small type difficult to read and hence only ‘browsed’ the book during my investigations into the Holocaust. One day I hope to have the time to read the book in its entirety. For ease of use contents pages, extensive notes and an index are included. This is an important book that needed to be written and is a significant contribution to this horrific period of world history that must be discussed and debated honestly.
Show Less
LibraryThing member Hedgepeth
zero stars -- I am a very serious reader (both in general and regarding WWII), but this book was one I could not read. As they say in advertising, I was not in the target audience.
LibraryThing member piefuchs
Excellent book to learn about human nature. He takes on a difficult thesis successfully argues his point. This book made quite the splash when it was first published and I think it is unfortunate that the conversation seems to have ceased. Highly relevant description of little people actually
Show More
question authority.
Show Less
LibraryThing member kaelirenee
It is sometimes so easy to forget or ignore the fact that anti-Semitism was deeply rooted in Europe, making it so simple for the Holocaust to occur. This is an excellent explination and look into the minds of those willing to help or turn a blind eye to the execution of so many.
LibraryThing member philae_02
This book focuses mainly on the anti-Semitism in Germany (and for the majority of Europe) and the police battalions. Goldhagen claims that the men that made up the police battalions were the ones that represented the 'ordinary' Germans during the Nazi period. This book was full of gruesome examples
Show More
and pictures--I wouldn't suggest reading it during the holidays. But he brings up a side of the Holocaust I had never heard / learnt about before.
Show Less
LibraryThing member Karlus
This is a very easy book to read and understand. Borrowing now from the Introduction, the author's goal is to "understand the mind-set of tens of thousands of ordinary Germans who became genocidal killers...To explain why the Holocaust occurred, to explain how it could occur...." Toward that end he
Show More
undertakes "reconceiving three subjects: the perpetrators of the Holocaust, German antisemitism, and the nature of German society during the Nazi period....Explaining why the Holocaust occurred requires a radical revision of what has until now been written. This book is that revision." The author discusses "German antisemitism in the nineteenth and twentieth centuries [and] ... demonstrates the development in Germany well before the Nazis came to power of a virulent and 'eliminationist' variant of antisemitism." He "explores further ... eliminationist antisemitism's capacity to move the Nazi leadership, the perpetrators of the Holocaust, and the German people to assent and, in their respective ways, to contribute to the eliminationist program."
In my opinion, anyone who can read should read this book, for its different and more thorough view of the subject.
Show Less
LibraryThing member MiaCulpa
I'm not in the slightest surprised that "Hitler's Willing Executioners" is a controversial book; Any theory that blames the German people (and friends) for the evil done in their name rather than that chap Hitler and his mates will lead to the odd argument.

Goldhagen makes some interesting points
Show More
supporting his thesis; basically Germans have a long history of hating Jews and the coming of the Nazis allowed the average German more opportunity to act upon their hatred of Jews. The fact that, for example, newly appointed Nazi officials had to tell Weimer appointed judges to refrain passing judgements so prejudiced against Jewish people as they were outside the law, is eye-opening.

Reading other reviews of "Hitler's Willing Executioners" here shows that there are doubts about Goldhagen's thesis but these reviewers are doubtless more intelligent than me, so take my thoughts with a grain of salt.
Show Less
LibraryThing member ablueidol
Painful reminder that the Nazis tapped into populist mainstream views of Jews that was common throughout Europe and the USA but which quietly faded post war to the margins, perhaps in proportion to the decline in church attendance! Now Revelations Evangelism are pro Jews because of end time visions
Show More
so stoking the flames of hate in the middle east and Africa
Show Less
LibraryThing member SPQR2755
Very hard to read. It is a sweeping indictment of a whole culture and its institutions well argued and documented. Is it a broad brush? Maybe, but it rings more true than not.
LibraryThing member Magatha
Goldhagen's vilification of other scholars, in both the text and throughout the footnotes, made me question the integrity of his work. I subsequently read some compelling criticism of both the author and the book, and cannot recommend it. I think he has assembled a well-researched and vividly
Show More
written history, but his academic and professional prejudices make me unable to trust it.
Show Less
LibraryThing member marcares
One can find large amount of information and events related to the Holocaust, but comes with a shockingly inaccurate judgement/conclusion/thesis.
Fewer