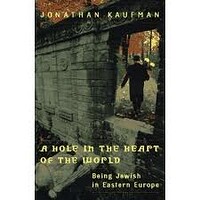 A Hole in the Heart of the World: Being Jewish in Eastern Europe

"Spanning nearly a century, from the years preceding the Holocaust to the defeat of the Nazis and subsequent triumph of Communism to the fall of the Berlin Wall and the present day, Jonathan Kaufman tells the stories of five families. A Hole in the Heart of the World is both a descent into the still-dark soul of Eastern Europe and a shockingly optimistic chronicle of a fragile cultural and religious birth. In Berlin a prominent Jewish family clings to its Communist ideals even after the end of the Cold War. A West German cantor - and concentration camp survivor - crosses the Berlin Wall to minister to the Jewish remnant in East Berlin. In Hungary a rabbi turns dissident when Communist-controlled Jewish leaders dismiss him, but he continues to teach Hebrew class in his living room, waging an underground war to preserve and nurture Jewish life. Young citizens of Prague, Warsaw, and Budapest find a renewed faith and pride as they uncover a secret heritage buried in the rubble of war and long condemned by the Communist regime. A Polish Catholic woman bears silent witness to the sufferings of her Jewish neighbors during World War II and later discovers something that overturns everything she ever believed about her past." "From the old to the young and the disenchanted to the enthusiastic, each arrives, finally, at a place of cultural and religious renewal. A Hole in the Heart of the World is a luminous portrait of the Jewish life that persists, though transformed and tenuous, as a vital element of the European community."--BOOK JACKET.Title Summary field provided by Blackwell North America, Inc. All Rights Reserved… (more)

The Mezuzah in the Madonna's Foot: Oral Histories Exploring 500 Years in the Paradoxical Relationship of Spain and the Jews by Trudi Alexy
The Melting Pot: An Adventure in New York by Kenneth Roseman
Escape from the Holocaust by Kenneth Roseman
Upon the Doorposts of Thy House: Jewish Life in East-Central Europe, Yesterday and Today by Ruth Ellen Gruber
Shtetl: The Life and Death of a Small Town and the World of Polish Jews by Eva Hoffman
10 more
Deborah, Golda, and Me: Being Female and Jewish in America by Letty Cottin Pogrebin
In My Brother's Image: Twin Brothers Separated by Faith After the Holocaust by Eugene Pogany
Jewish Days: A Book of Jewish Life and Culture Around the Year by Francine Klagsbrun
A Jew Today by Elie Wiesel
How to Get More Out of Being Jewish even if you are not sure you believe in God, you think going to synagogue is a waste of time, you think keeping kosher is stupid, you hated Hebrew school, or all of the above by Gil Mann
While Six Million Died: A Chronicle of American Apathy by Arthur D. Morse
The Third Jewish Catalog: Creating Community by Sharon Strassfeld
The Vanishing American Jew: In Search of Jewish Identity for the Next Century by Alan M. Dershowitz
The Shtetl: A Creative Anthology of Jewish Life in Eastern Europe by Joachim Neugroschel
A Vanished World by Roman Vishniac
Fewer