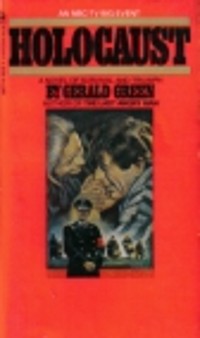 Holocaust: A Novel of Survival and Triumph

The epic novel of two families and the genocide in Nazi Germany, by the writer of the blockbuster TV miniseries.   The Dorfs are "good" Germans, loyal to the new Nazi regime, with whom their son Erik, a promising lawyer, finds his ambitions realized with the SS at the side of the ruthless Reinhard Heydrich.   The Weisses are Jewish, also "good" Germans--but under the new regime, they are doomed.   Told through the reminiscences of Erik Dorf, the ambitious SS officer, and the courageous young Jew Rudi Weiss, who ran away from his family as a young boy in an effort to fight the Nazis, this novel takes us through almost every significant event of the Third Reich, from the horrific reality of Kristallnacht to the mass exterminations at Auschwitz. It is a portrait of the extraordinary choices all Germans were forced to make on a daily basis--and the unimaginable consequences if they were wrong.   A winner of the Dag Hammarskjöld International Prize, with more than two million copies sold, Holocaust is an unforgettable glimpse into this monumental human tragedy.… (more)

LibraryThing member Madamxtra
When The Holy Spirit led me to pick up this book and start readinng it, I was angry at the Jews for their weakness and passive behavior during such blatant pursecution. I was stunned at their ability to fool themselves, even till the end. Several chapters in I realized that my own race has done the
Show More
same thing for hundreds of years. More importantly, the WORLD goes gullably along with dictators who spew rhetoric, insight hate, and strive for total domination. I held me tears until the end. But I'll never be able to hold my peace again!
Show Less

The Rabbi by Noah Gordon
The Wall by John Hersey
King of the Jews: A Novel of the Holocaust by Leslie Epstein
While Six Million Died: A Chronicle of American Apathy by Arthur D. Morse
The Holocaust Years: The Nazi Destruction of European Jewry, 1933-1945 by Nora Levin
17 more
The Survivor: An Inspiring True Story by Jack Eisner
Children of the Holocaust: Conversations with Sons and Daughters of Survivors by Helen Epstein
Escape from the Holocaust by Kenneth Roseman
A Night of Watching by Elliott Arnold
A Beggar in Jerusalem by Elie Wiesel
The Fifth Son by Elie Wiesel
Hitler's War Against the Jews: A Young Reader's Version of The War Against the Jews, 1933-1945 by David A. Altshuler
Shoah: An Oral History of the Holocaust - The Complete Text of the Film by Claude Lanzmann
Denying the Holocaust: The Growing Assault on Truth and Memory by Deborah E. Lipstadt
Voyage of the Damned by Gordon Thomas
Jacob's Rescue: A Holocaust Story by Malka Drucker
The Last of the Just by Andrae Schwarz-Bart
O Jerusalem! by Larry Collins
Inside, Outside a novel by Herman Wouk
If Not Now, When? by Primo Levi
Chutzpah by Alan M. Dershowitz
Elli: Coming of Age in the Holocaust by Livia Bitton Jackson
Fewer