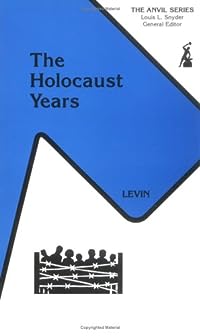 Covered here are the events involved in the preparation and implementation of the planned annihilation of Europe's Jews by the Nazis. Part I is a compact history of preparatory steps leading to the decision to destroy the Jews physically, including Western anti-Semitic practices and doctrines, the collapse of the Weimar Republic leading to the rise of Nazism and Hitler's rise to power, the early anti-Jewish laws and the crucial events of 1938, including Kristallnacht. The text also deals with the German invasion of Russia and the mass executions of Jews by mobile killing units that accompanied the army, forced ghettoization of Jews in German-occupied Europe, Jewish resistance efforts, deportations from western, central, and southeastern Europe, and rescue efforts and failures. Part II includes 100 readings that document and elucidate these events and include first-hand testimony, official Nazi and Allied documents, eyewitness accounts, and diary and memoir excerpts.… (more)

LibraryThing member ShaneTierney
Well organized and coherent narrative; the first section is arranged topically, and the second regionally.
Levin takes a stance--though not overt it is certainly evident. She uses words like “rantings” and strong adjectives where they may not be perfectly appropriate. It is the Holocaust she's
Show More
describing, but it is a work of history rather than a memoir, so a little more just-the-facts-ma’am and the reader can worry about the judgments--this is not to say it is short on facts...there are many, and Levin knows her subject, but the author comes through occasionally. Some acts are generalized (“barbarous cruelties”) rather than specifically described. There is an occasional ad homonym attack –“Darre is a crank”, and the phrasing can be slightly repetitive...”no precedent in history”, “unparalleled crimes”, and occasionally facts are restated.
Levin seems to assume a foundational knowledge of the subject, and some subjects are mentioned before there is a discussion—eg Anschluss, Munich Pact, Nuremburg Laws. Knowledge of the Holocaust going into this book may not be a stretch, but the book is called "The Holocaust", and it is not comprehensive despite its length. It takes a high-level perspective on the Holocaust, and concerns itself primarily with the political mechanisms.
There is plenty to be learned from this book, but I would recommend it as further study for someone interested in the Holocaust, and not as a primer or first read.
Show Less

The Holocaust Years: The Nazi Destruction of European Jewry, 1933-1945 by Nora Levin (Book)

The Abandonment of the Jews: America and the Holocaust, 1941-1945 by David S. Wyman
The Holocaust in History by Michael Robert Marrus
While Six Million Died: A Chronicle of American Apathy by Arthur D. Morse
The Holocaust: The Fate of European Jewry, 1932-1945 by Leni Yahil
Out of the Whirlwind: A Reader of Holocaust LIterature a reader of holocaust literature by Albert H. Friedlander
10 more
Judenrat: The Jewish Councils in Eastern Europe Under Nazi Occupation by Isaiah Trunk
Atlas of the Holocaust by Martin Gilbert
The Fugu Plan: The Untold Story of the Japanese and the Jews During World War II by Marvin Tokayer
The Survivor: An Inspiring True Story by Jack Eisner
They Fought Back: The Story of Jewish Resistance in Nazi Europe by Yuri Suhl
Shoah: An Oral History of the Holocaust - The Complete Text of the Film by Claude Lanzmann
Children of the Holocaust: Conversations with Sons and Daughters of Survivors by Helen Epstein
Denying the Holocaust: The Growing Assault on Truth and Memory by Deborah E. Lipstadt
Hitler's Willing Executioners: Ordinary Germans and the Holocaust by Daniel Jonah Goldhagen
A Jew Today by Elie Wiesel
Fewer