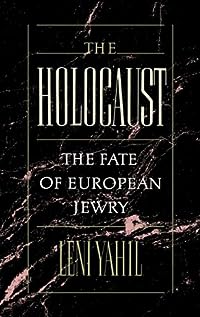 When The Holocaust first appeared in Israel in 1987, it was hailed as the finest, most authoritative history of Hitler's war on the Jews ever published. Representing twenty years of research and reflection, Leni Yahil's book won the Shazar Prize, one of Israel's highest awards for historical work. Now available in English, The Holocaust offers a sweeping look at the Final Solution, covering not only Nazi policies, but also how Jews and foreign governments perceived and responded to the unfolding nightmare. The Holocaust is astonishingly comprehensive. Yahil weaves a gripping chronological narrative that stretches from the Norwegian fjords to the Greek islands, from Amsterdam to Tehran--and even Shanghai. Her writing is balanced, objective, and compelling, as she systematically explores the evolution of the Holocaust in German-occupied Europe, probing its politics, planning, goals, and key figures. Yahil uses her command of the many relevant languages to marshal an impressive array of documentary and statistical evidence, driving her narrative forward with telling details and personal accounts--such as a survivor's description of her perseverance during a death march, or the story of the Struma, a boat that sank with over 700 Jewish refugees when the British refused to receive it in Palestine. Along the way, she destroys persistent myths about the Holocaust: that Hitler had no plan for exterminating the Jews, that the Jews themselves went peacefully to the slaughter. Though Yahil finds that Nazi policies were often inconsistent, particularly during the years before the war, she conclusively demonstrates that Hitler was always working toward a final reckoning with world Jewry, envisioning his war as a war against the Jews. The book also recounts numerous uprisings and acts of resistance in ghettos and concentration camps, as well as the activities of Jewish partisan units. Yahil describes the work of Jews in America, Palestine, and world organizations on behalf of Hitler's victims--often in the face of resistance by the Allied governments and neutral states--and explores the factors that affected the success of rescue efforts. The Holocaust is a monumental work of history, unsurpassed in scope and insightful detail. Objective yet compassionate, Leni Yahil brings together the countless diverse strands of this epic event in a single gripping account.… (more)

The Abandonment of the Jews: America and the Holocaust, 1941-1945 by David S. Wyman
The Holocaust Years: The Nazi Destruction of European Jewry, 1933-1945 by Nora Levin
Atlas of the Holocaust by Martin Gilbert
The Holocaust in History by Michael Robert Marrus
The Holocaust Chronicle by Marilyn J. Harran
9 more
Hitler's Willing Executioners: Ordinary Germans and the Holocaust by Daniel Jonah Goldhagen
While Six Million Died: A Chronicle of American Apathy by Arthur D. Morse
Denying the Holocaust: The Growing Assault on Truth and Memory by Deborah E. Lipstadt
Judenrat: The Jewish Councils in Eastern Europe Under Nazi Occupation by Isaiah Trunk
Children of the Holocaust: Conversations with Sons and Daughters of Survivors by Helen Epstein
The Golden Tradition: Jewish Life and Thought in Eastern Europe by Lucy S. Dawidowicz
A Vanished World by Roman Vishniac
Out of the Whirlwind: A Reader of Holocaust LIterature a reader of holocaust literature by Albert H. Friedlander
Voyage of the Damned by Gordon Thomas
Fewer