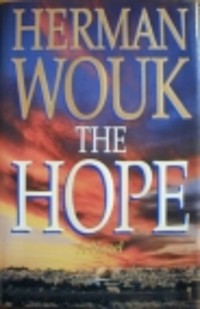 The Hope a novel

"Herman Wouk is one of this century's great historical novelists, whose peerless talent for capturing the human drama of landmark world events has earned him worldwide acclaim. In The Hope, his long-awaited return to historical fiction, he turns to one of the most thrilling stories of our time - the saga of Israel." "In the grand, epic style of The Winds of War and War and Remembrance, The Hope plunges the reader into the major battles, the disasters and victories, and the fragile periods of peace from the 1948 War of Independence to the astounding triumph of the Six-Day War in 1967. And since Israelis have seen their share of comic mishaps as well as heroism, this novel offers some of Herman Wouk's most amusing scenes since the famed "strawberry business" in The Caine Mutiny." "First to last The Hope is a tale of four Israeli army officers and the women they love: Zev Barak, Viennese-born cultured military man; Benny Luria, ace fighter pilot with religious stirrings; Sam Pasternak, sardonic and mysterious Mossad man; and an antic dashing warrior they call Kishote, Hebrew for Quixote, who arrives at Israel's first pitched battle a refugee boy on a mule and over the years rises to high rank. In the love stories of these four men, the author of Marjorie Morningstar has created a gallery of three memorable Israeli women and one quirky fascinating American, daughter of a high CIA official and headmistress of a Washington girls school." "With the authenticity, authority, and narrative force of Wouk's finest fiction, The Hope portrays not so much the victory of one people over another, as the gallantry of the human spirit, surviving and triumphing against crushing odds. In that sense it can be called a tale of hope for all mankind; a note that Herman Wouk has struck in all his writings, against the prevailing pessimism of our turbulent century."--BOOK JACKET.Title Summary field provided by Blackwell North America, Inc. All Rights Reserved… (more)

LibraryThing member TadAD
It was OK but it didn't affect me the way that either The Caine Mutiny or The Winds of War did. It didn't even reach War and Remembrance.

When it comes to "founding Israel" stories, my favories are still Collins/Lapierre's O Jerusalem! and Uris' Exodus.
3 more
LibraryThing member ava-st-claire
Wonderful! Just read it!
LibraryThing member creighley
This saga starts in 1948 and concludes in the miraculous triumph in 1967's six day war. It is the story of the key players in those beginning days as Israel fights to be recognized as a nation.
LibraryThing member EvelynBernard
The Hope is a work of historical fiction that covers the history of Israel from the War of Independence of 1948 through the Six-Day War of 1967. I would like to say I loved this book but, unfortunately, I can't. It is obvious that Wouk has extensively researched the battles, the history and the
Show More
politics of that region at that time. The sections of the book that dealt with this are exciting and enormously interesting. He should have stopped there.

However, historical fiction needs a cast of characters to bring the work to life and here Wouk falls short. The four (4) fictional men are reasonably well written - especially when it comes to their roles as soldiers. I can't say the same for the women characters. There is plenty of attention paid to how they fill out their uniforms but not much on how they contributed to history. All four 'relationships' felt forced and on the whole, unbelievable - disappointing from the man who brought us Marjorie Morningstar, War and Remembrance and The Winds of War. On the whole, the fictional characters and their parts in the story are rather uninteresting and don't really add much to the overall story. I tended to find them distracting rather than adding to the historical account.

In my opinion, you would do better to read James Michener's 'The Source' or Leon Uris' 'Exodus' for historical fiction on this topic. For a non-fiction account, try 'Israel: A History' by Martin Gilbert.
Show Less
Fewer

The Glory a novel by Herman Wouk
Mitla Pass by Leon Uris
Chutzpah by Alan M. Dershowitz
This Is My God by Herman Wouk
A Beggar in Jerusalem by Elie Wiesel
23 more
Exodus by Leon Uris
As a Driven Leaf by Milton Steinberg
The Outsider by Howard Fast
The Oath by Elie Wiesel
A Treasury of Jewish Humor: A Classic Collection of Humorous Stories, Satires and Witticism from the Rich Jewish Literature of All Times by Nathan Ausubel
The Book of Abraham by Marek Halter
Heritage: Civilization and the Jews by Abba Solomon Eban
Deborah, Golda, and Me: Being Female and Jewish in America by Letty Cottin Pogrebin
To Raise a Jewish Child: A Guide for Parents by Hayim Donin
The Vanishing American Jew: In Search of Jewish Identity for the Next Century by Alan M. Dershowitz
A Jew Today by Elie Wiesel
The Family Orchard by Nomi Eve
The Jewish Catalog: A Do-It-Yourself Kit by Richard Siegel
Jewish and Female: Choices and Changes in Our Lives Today by Susan Weidman Schneider
Stars of David: Prominent Jews Talk About Being Jewish by Abigail Pogrebin
The Covenant by Naomi Ragen
Chicken Soup for the Jewish Soul stories to open the heart and rekindle the spirit by Jack Canfield
A Treasury of Jewish Folklore stories, traditions, legends, humor, wisdom, and folk songs of the Jewish people by Nathan Ausubel
Jewish Humor: What the Best Jewish Jokes Say About the Jews by Joseph Telushkin
The Fifth Son by Elie Wiesel
The New Jewish Wedding by Anita Diamant
I am Jewish: Personal Reflections Inspired by the Last Words of Daniel Pearl by Judea Pearl
The Best of Sholom Aleichem by Sholem Aleichem,
Fewer