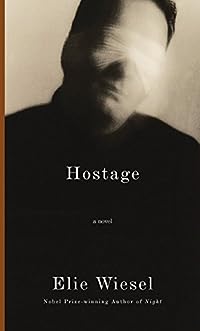 It's 1975, and Shaltiel Feigenberg, a professional storyteller and writer, has been taken hostage. He has been abducted from his home in Brooklyn, New York, blindfolded and tied to a chair in a dark basement. His captors, an Arab and an Italian, don't explain why Shaltiel has been chosen, just that his life will be bartered for the freedom of three Palestinian prisoners. As his days of waiting commence, Shaltiel resorts to what he does best, telling stories to himself and to the men who hold his fate in their hands. A Communist brother and a childhood spent hiding from the Nazis in a cellar, the kindness of liberating Russian soldiers, the unrest of the 1960s are some of the memories that unfold during his captivity, as the outside world breathlessly follows his disappearance and the police move toward a final confrontation with his captors. The author builds the world of Shaltiel's memories, haunted by the Holocaust and a Europe in the midst of radical change. This story is both a thriller and a meditation on the power of memory to connect us to the past and our shared need for resolution.… (more)

LibraryThing member AddictedToMorphemes
There is an interesting discussion in this book between two terrorists who support the Palestinian cause and their Jewish-American hostage about the decades-old conflict surrounding land ownership in the Holy Land. This book has value for that conversation alone. However, it is very heavy-handed in
Show More
its leanings. Yes, the villains are obvious in this particular story, but it is not a completely fair representation of all Palestinians or what their people face either.

There was no one more entitled than this particular author, a Holocaust survivor, to the opinions expressed in this book; however, looking at this never-ending conflict between Israelis and Palestinians and the multiple generations of children born after WWII who have grown up in a war zone, I wish the two sides would finally stop being led by the governments serving as puppet masters (most especially the ongoing U.S. involvement/funding) and find a way toward resolution.

"There is one less murderer in the world but does it make it any better? Does it change anything? And will his children become avengers like their father? Will the chain of violence be passed on from one generation to the next? Will it never come to an end?"

After a point in regard to this debate, it gets muddled as to who is actually the oppressor and who is the oppressed. It's time for this to come to an end. Violence begets more violence. Hatred begets hate. Both sides have families and children and dreams for their future. I wonder if this is truly about religious beliefs anymore or if it has just become a habit of getting revenge for past and continuous murders on each side? I realize this is idealistic and impossible (and most likely uninformed and ignorant), but I wish they could see that and stop killing each other already.
Show Less
4 more
LibraryThing member muddyboy
Elie Wiesel draws upon his experience as a holocaust survivor to in a way retell his would wide award winning classic Night. The book tells the story of a Jewish storyteller in New York City who is captured by two terrorists, one Arab and one Italian, who are holding him to try to get three
Show More
political prisoners released from jail. The book has very little physical action as it mainly centers on the hostage's recollections of his upbringing, his family and also some of the stories he has told to entertain others over the years. The terrorists play a bit of a good cop bad cop scenario as the book evolves. The book is very thought provoking and is for some who want to think - not someone look for action. The central question posed to me is have people really changed beyond the time of the holocaust?
Show Less
LibraryThing member AJBraithwaite
An interesting interweaving of stories around the experiences of a Jewish storyteller who is kidnapped by a Palestinian and an Italian. Shaltiel Feigenberg's father had brought him to America to escape a Europe marred by the Holocaust, but the repercussions of the establishment of Israel brought
Show More
about the situation of Shaltiel's kidnap.

During the Second World War Shaltiel survived by being able to win or lose games of chess in the basement of his German protector. In the Brooklyn basement of his kidnappers, he has to use his ability to speak or remain silent to persuade his captors not to kill him.

His tales have some effect on one of his captors, but it's on the European one, not the Palestinian man with whom he really needs to connect the most. I enjoyed the story very much, but it still leaves me feeling fairly hopeless about the prospects of peace in the Middle East.
Show Less
LibraryThing member ashleydavida
I almost forgot how much I love Mr. Wiesel's writing until I saw this book on display at my local library. Night has always been one of my favorite books of all time so I figured his other books would be just as good. I was not disappointed, even though the novel started out slow. The novel takes
Show More
place in 1975 Brooklyn.

While the main plot of Hostage is about being a hostage, it is so much more than that. It's about inner mental strength, perseverance, and sticking to your beliefs even when you feel like you are in Hell. Throughout the entire novel, Shaltiel Feignberg focuses on the memories of his past to distract himself from the present situation. He goes through his major life events from childhood and on.

He, a storyteller, tells us of how chess saved him from WWII and Auschwitz when he was a child. He speaks lovingly of his father. He tells us stories of his family, his adventures abroad, and his wife. He often wondered if his family was worried about him and if they were looking for him. Little to his knowledge, the U.S. and other countries published articles about his disappearance, abduction, and hostage situation.

You're probably wondering who took him hostage and why. You want to know if he lives or dies. Unfortunately, I am not going to give you that information. I will tell you that the book taught me something about myself that I never knew and that is one of the greatest gifts you can receive from literature.
Show Less
LibraryThing member BenKline
Not one of Elie Wiesel's best works, but far from the worst of many others. Its not quite as nuanced as some of his others. The narrative skipping from things isn't too much of the problem, but going from third person to first person randomly threw me off. There wasn't as much story to this, as
Show More
just juxtaposition reminiscing "clips" to Shaltiel's life; some of which was interesting, and some of it wasn't. The blurb of him "telling stories to his captives" is a bit misleading as that's not what really happens in the novel either.
Show Less
Fewer

The Elephant and My Jewish Problem: Selected Stories and Journals, 1957-1987 by Hugh Nissenson
From the Kingdom of Memory: Reminiscences by Elie Wiesel
The Oath by Elie Wiesel
Twilight by Elie Wiesel
Maimonides: A Guide for Today's Perplexed by Kenneth Seeskin
27 more
The Fifth Son by Elie Wiesel
Salvation by Sholem Asch
A Jew Today by Elie Wiesel
Rachel, the Rabbi's Wife by Silvia Tennenbaum
Stalking Elijah: Adventures with Today's Jewish Mystical Masters by Rodger Kamenetz
A Beggar in Jerusalem by Elie Wiesel
Night / Dawn / Day by Elie Wiesel
Memoirs: All Rivers Run to the Sea by Elie Wiesel
The Jewish Family Book by Sharon Strassfeld
The Town Beyond the Wall by Elie Wiesel
The Jewish Woman: New Perspectives by Elizabeth Koltun
Broken Tablets: Restoring the Ten Commandments and Ourselves by Rachel Mikva
Souls on Fire: Portraits and Legends of Hasidic Masters by Elie Wiesel
The Purim Anthology by Philip Goodman
The Best of Sholom Aleichem by Sholem Aleichem,
As a Driven Leaf by Milton Steinberg
In the Beginning by Chaim Potok
The Gift of Asher Lev by Chaim Potok
The Shavuot Anthology by Philip Goodman
God & the Big Bang: Discovering Harmony Between Science & Spirituality by Matt Daniel C.,
Judaism and Christianity: The Differences by Trude Weiss-Rosmarin
Written Out of History: Our Jewish Foremothers by Sondra Henry
Sabbath: The Day of Delight by Abraham Ezra Millgram
Coming Home to Zion: A Pictorial History of Pre-Israel Palestine by Abraham Shulman
Response to Modernity: A History of the Reform Movement in Judaism by Michael A. Meyer
The Sisters Weiss by Naomi Ragen
Inside Kasrilevke by Sholem Aleichem
Fewer