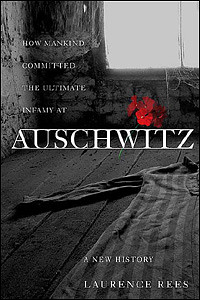 How Mankind Committed the Ultimate Infamy at Auschwitz: A New History

Auschwitz-Birkenau is the site of the largest mass murder in human history. Yet its story is not fully known. In Auschwitz, Laurence Rees reveals new insights from more than 100 original interviews with Auschwitz survivors and Nazi perpetrators who speak on the record for the first time. Their testimonies provide a portrait of the inner workings of the camp in unrivalled detail-from the techniques of mass murder, to the politics and gossip mill that turned between guards and prisoners, to the on-camp brothel in which the lines between those guards and prisoners became surprisingly blurred. Rees examines the strategic decisions that led the Nazi leadership to prescribe Auschwitz as its primary site for the extinction of Europe's Jews-their "Final Solution." He concludes that many of the horrors that were perpetrated in Auschwitz were driven not just by ideological inevitability but as a "practical" response to a war in the East that had begun to go wrong for Germany. A terrible immoral pragmatism characterizes many of the decisions that determined what happened at Auschwitz. Thus the story of the camp becomes a morality tale, too, in which evil is shown to proceed in a series of deft, almost noiseless incremental steps until it produces the overwhelming horror of the industrial scale slaughter that was inflicted in the gas chambers of Auschwitz. Insights gleaned from more than one hundred original interviews shed new light on history's most famous death camp, with the testimonies of survivors providing a detailed and chilling portrait of the camp's inner workings, in a companion volume to the PBS documentary.… (more)

LibraryThing member bnbookgirl
Fabulous, loved it. Have hand sold this book to several people. The DVD documentary is equally as good.
8 more
LibraryThing member Meggo
The story of Auschwitz, told both in the context of the camp itself, and in the context of the war overall and the Nazi's extermination efforts in particular. I learned much about the workings of the extermination camps, and how Auschwitz - a hybrid camp - was a creature unto itself. Richly
Show More
researched, the story is made even more compelling by the use of first person accounts. Stories of people in the ghettoes, in the camps, and even of a person who was in a gas chamber to be executed without knowing it (and who survived because of a rebellion by the Sonderkomandos that morning) - all help add layers to the clinical story of the camp and its operations. Recommended.
Show Less
LibraryThing member TimONeill
Excellent, though not exactly cheery reading. Rees - who is rapidly becoming the go-to guy for historical analysis of genocide and war crime in the Twentieth Century - details how Auschwitz became the most illustrative and extreme expression of the Nazi Regime in all its insanity, its murderousness
Show More
and its incompetence.

It's the incompetence that comes as a surprise. Despite the myth that Nazis were highly organised and efficient, Rees demonstrates that the regime was a clumsy and bumbling mess of conflicting and competing bureaucracies that worked, usually against each other, to find ways to impress Hitler by putting his insane but largely abstract ideas into action.

Rees also dismisses the idea of the SS as mindless automatons who simply "obeyed orders" without question or thought. Far from simply doing as instructed, SS officers and even lower ranks were actually given wide parameters for their "duties" and it was consistently *them* who came up with ways to kill and dispose of their victims; often with ingenuity and always with enthusiasm. Many of the most horrific elements of the death factories for which Auschwitz was the model did not come from orders from the "top" but from innovations from the bottom.

Rees further argues that its the industrialisation and depersonalisation that became built into the process that sets the Holocaust apart from other genocides and crimes against humanity. He also makes a compelling case for Auschwitz as a microcosm of the Nazi regime generally.

At times the detailed description of how this industrialisation of mass murder is so methodical that the Nazis' insane ideas almost start to take on a kind of perverse logic. But every two pages or so a particularly macabre detail amongst the catalogues of official memos and lists of transport schedules snaps the reader back to a realisation of what it is that Rees is explaining.

Eye witness accounts of the sand covering a new mass grave moving and writhing as wounded victims tried to fight their way out of the mass of fresh corpses or a bizarre column of the prams of gassed children, five prams wide and taking an hour to go past, are images that are hard to forget.

This will probably be the definitive history of Auschwitz for decades to come and deservedly so. Chilling but superb.
Show Less
LibraryThing member OpalCat1986
I have always had a weird fascination with World War 2 and all areas that amounted to the terrible loss the entire world suffered during those years. But this book defines the area that interests me most.
It is factual but sensitvely written and has an opinion from most sides. I find that although
Show More
the topic is not always an enjoyable one to study, this book gave a brilliant insight and the eye witnesses account re-told without glorifing it.
A fascinating and in-depth read.
Show Less
LibraryThing member sbenne3
If you are interested in the topic, this is a very well written book. I learned a lot. It is very moving and very sad. The more I read about this time in history, the less I understand about how it could have even happened.
LibraryThing member BryanThomasS
Stunning! Powerful! A must read for anyone who wants to see inside the Holocaust and never forget. Right up there with The Diary as Anne Frank as a must read for Holocaust study. We should never forget and this book is full of previously unknown stories from the famous concentration camp. Inside
Show More
look at how concentration camp came about, how they functioned and what life was like for both guards and prisoners. Unforgettable.
Show Less
LibraryThing member Philip100
This is a well written and researched book. I liked the way Mr. Rees gets to the point with out a lot of extra prose. His view into the workings of the camps and the working apparatus that made up the Final Solution is concise and to the point. If you have any interest in WWII history you should
Show More
read this book.
Show Less
LibraryThing member John
Auschwitz is a good history of what is probably the best known, at least by name, of the German concentration/death camps. Rees traces the development of Auschwitz from its origins as a concentration camp, plans for it to become an agricultural research centre (Himmler was very keen), its evolution
Show More
into an industrial production site with the active compliance of I.G.Farben (which never produced anything of value), and then its final incarnation as a death camp. Along the way, he details how the whole process from transportation, to selection, to murder, to disposal of bodies, and the harvesting of valuables down to removing gold fillings continued to evolve and "improve" its efficiencies. As Rees says:

..this was a collective enterprise owned by thousands of people, who each made the decision not just to take part but to contribute initiatives in order to solve the problem of how to kill human beings and dispose of their bodies on a scale never attempted before.

Rees feels that the story provides insight into the human condition, and that is mostly not good. This is a story of human degradation and suffering that is almost never redemptive. More than 200,000 children were murdered in Auschwitz, and at one time, the procession of empty baby carriages pushed out of Auschwitz towards the train station, in rows of five, took an hour to pass.

What these survivors have taught me (and, if I am honest, I learned it from the perpetrators as well) is that human behaviour is fragile and unpredictable and often at the mercy of the situation.

Which recalls a quote from Paul Fussell that I have always remembered:

...if you can't imagine yourself as an SS officer hustling Jewish women and children into the gas chamber, you need to be more closely in touch with your buried self.

Who knows how any one of us might react in a given situation? And then there is the seduction of the "cumulative radicalization" of the Nazi regime that produced monsters from perfectly ordinary people who, in another lifeline, would have led full but uneventful lives that harmed no one. (See Christopher Browning's excellent study on one police battalion that became engaged in the murder of Jews in the Soviet Union). Christabel Bielenburg captured this in her excellent memoir, The Past is Myself:

..it became increasingly difficult for us to escape the occasional compromise. By compromising we could learn how each small demand for our outward acquiescence could lead to the next and with the gentle persistence of an incoming tide could lap at the wall of just that integrity we were so anxious to preserve.

Interestingly, although they started from a very different place, even the Nazi leadership was susceptible to the effects of this cumulative radicalization. Rees quotes statement from both Himmler and Heydrich, in 1940, to the effect that "biological extermination is undignified for the German people as a civilized nation". But the progress of the war, the increasing mania about the Jews, and the greatly improved gathering and killing methods, led to the development and implementation and commitment of vast resources to the Final Solution.

Rees puts his history within the broader context of evolution of Nazi Jewish policy and addresses the differing reactions of various countries, from the shameful complicity of the French authorities "at every stage" to the honourable actions of the Danes to save their Jewish citizens.

Rees also argues that a recurring theme in practically every aspect of Nazi planning and actions, not just limited to the murder of Jews but in the whole conduct of the war,, is that, "the Nazi leadership constantly must contend with events they have not properly anticipated".

This is never an easy story, and Rees has a number of individual stories of horror to recount as well, but it is an important one.
Show Less
LibraryThing member pivic
Excellent tome on The Final Solution, focusing (of course) on Auschwitz, the foremost concentration camp in The Third Reich, if one counts by the number of dead. Rees has researched the subject for many years, and even facts from the 21st century are included here. Apart from the sheer
Show More
chronological dealings, Rees exemplifies, factualises and explains everything in lay-person terms, going to great extent to bring out the humanity of it all, i.e. how humans are at their worst and best in a variety of ways, before, during and after WWII. A must-read, as a brilliant accommodation to the likewise brilliant BBC TV series.
Show Less
Fewer

Auschwitz: A Doctor's Eyewitness Account by Miklos Nyiszli
The Holocaust Chronicle by Marilyn J. Harran
Hitler's Willing Executioners: Ordinary Germans and the Holocaust by Daniel Jonah Goldhagen
By Bread Alone: The Story of A-4685 by Mel Mermelstein
The Holocaust: The Fate of European Jewry, 1932-1945 by Leni Yahil
4 more
Denying the Holocaust: The Growing Assault on Truth and Memory by Deborah E. Lipstadt
The Years of Extermination: Nazi Germany and the Jews 1939-1945 by Saul FriedlSnder
Atlas of the Holocaust by Martin Gilbert
Promises Kept by Ernest W. Michel
Fewer