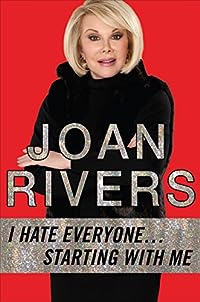 I Hate Everyone...Starting with Me

"Joan Rivers, comedienne, actress, jewelry monger, lives by the golden rule: Do unto others before they do unto you--and for God's sakes, do it funny! During the past two hundred years Joan has gained acclaim as an award-winning entertainment goddess. Joan is an international star (she can sneer in eight different languages) having performed all over the world, raising eyebrows, dropping names, and getting laughs. Her career in comedy began with a fantastic sense of self-loathing, but, after spending a couple of years looking at the human decrepitude around her, she figured, "Why stop here when there are so many other things to hate?" Here--uncensored and totally uninhibited--Joan says "F.U. to P.C." and says exactly what's on her mind...And HER mind is a terrible thing to waste. She proudly kicks the crap out of ugly children, dating rituals, funerals, and lousy restaurants. She nails First Ladies, closet cases, and hypocrites to the wall. She shows no mercy towards doctors, feminists, and historical figures. She even goes after Anne Frank, Stephen Hawking, and the plucky handicapped. Joan lets everyone--including herself--have it in this one hundred percent honest and unabashedly hilarious love letter to the hater in all of us. This is absolute Joan Rivers. You gotta love her. Even if she hates you"--… (more)

LibraryThing member armbrusm
You have to admire Joan Rivers' persistence and drive. I haven't followed her career closely, but watched the documentary "Joan Rivers - A Piece of Work" and really enjoyed it. I listened to I Hate Everyone as an audiobook in the car on the way to work, and got a few laughs out of it. The shtick
Show More
gets old quickly, but when it works, it works. The books doesn't do anything to reveal Rivers as a human being, though (unlike the documentary film), so when the laughs get thin, there's not anything else to fall back on.
Show Less
6 more
LibraryThing member fist
A long string of bitchy one-liners, conveniently grouped by target group. It's (mostly) tongue in cheek, and I found it hilarious. Bless her.
LibraryThing member henaresf
IMHO, Joan Rivers can do no wrong. I first saw her perform in Chicago in the mid 1980's and am pleased to be able to continue to enjoy her work now.

There's nothing new under the sun, and that's certainly the case here. If you didn't like Joan before this book will not change your mind. OTOH, if you
Show More
enjoy Joan's unique take on things then you'll enjoy this quick read
Show Less
LibraryThing member nbmars
Joan Rivers attacks everything and everybody in her sometimes hilarious but almost always vulgar and vitriolic misanthropic observations about who and what annoys her.

I wasn’t always offended by her attacks – after all, she doesn’t leave anyone out, not even herself. And she makes a point of
Show More
frequently interjecting remarks so outrageous it is clear she is only joking. Still.

At times, she tackled subjects that just would have best been left alone. I’m not one to find humor in making fun of, for instance, handicapped people.

Also, I do admit to wishing she hadn’t employed foul language so freely. (Although she quite rightly goes after hypocritical people like me who say “f-ing” but get all freaked out over people using the full “F word.”) But I did feel squirmily offended by her frequent gratuitous use of words that are not only crass and deprecatory but, in addition, sexist when referring to females: does she really have to call Anne Frank “that b*tch” or call other women the “c-word”?

It’s very interesting to me that so much of what is considered funny today involves sex and/or vulgarity. Certainly for years and years comedians made people laugh through witticisms like clever puns, or lampoons, or even insults, without resorting to raunchiness. Joan Rivers seems to think that her flagrant use of obscenity is funny in and of itself. And sometimes, it is in fact an essential part of the joke. Take this example by Rodney Dangerfeld, who gave his impression of a New York echo as:

But for the most part, I don’t find profanity inherently amusing. Maybe it is so to many people, but I sort of prefer more content to my social satire.
Show Less
LibraryThing member laurustina
I love me some Joan Rivers. "A Piece of Work" is one of my favorite documentaries - giving that full-force, workaholic Joan, vulnerable and brutal all at once. I hoped this book would give more of that, especially now that we've lost her. But it is a joke-punched diatribe when I wanted a
Show More
curtain-dropping soliloquy - like she unburdened her archive of one-liners instead of her soul. Then again, we didn't really earn that intimacy, did we?
Show Less
LibraryThing member scote23
I laughed so hard at this book.
LibraryThing member tealightful
It definitely had its funny moments but there were sections I just skimmed through. Specifically, the chapter where she gives all 50 states 2-3 new state nicknames. I glossed over a few (then checked the states I have lived in) and moved on
Fewer