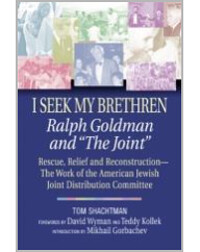 I Seek My Brethren: Rescue, Relief and Reconstruction -- The Work of the American Jewish Joint Distribution Committee Ralph Goldman and "The Joint"

"Nobel Prize-winning author Isaac Bashevis Singer, whose family was one of thousands aided by humanitarian relief, once said: "I can still feel the warmth of the blanket I received from The Joint."" "Established in 1914 to aid Palestinian Jews caught up in the agony of World War I, the American Jewish Joint Distribution Committee (known as the JDC or "The Joint") has brought aid to people all over the world - including Europe after World War II ("the Jewish Marshall Plan"), the State of Israel in the early days of its inception, and the Soviet Union during the height of the Cold War. The JDC has a simple mission: to help those in need, whoever they are and wherever they are found." "An activist and leader in Jewish affairs all his life, Ralph Goldman is the heart and soul of the JDC. From the 1940s through the 1960s, he assisted David Ben-Gurion during the founding of the State of Israel, and went on to serve as Executive Vice President of the JDC during the 1970s and 1980s. Under Goldman's leadership, the JDC established schools and community centers in Israel, brought aid to Jews trapped behind the Iron Curtain, and improved the lives of people around the world. Called "the ultimate insider" by former mayor of Jerusalem Teddy Kollek, Goldman is a vital part of Jewish life and an inspiration to people all over the world."--BOOK JACKET.Title Summary field provided by Blackwell North America, Inc. All Rights Reserved… (more)

A Certain People: American Jews and Their Lives Today by Charles E. Silberman
The Jews in America by David Cohen
The Jews in America: The Roots, History, and Destiny of American Jews by Max I. Dimont
Ellis Island to Ebbets Field: Sport and the American Jewis Experience by Peter Levine
How We Lived: A Documentary History of Immigrant Jews in American, 1880-1930 by Irving Howe
24 more
The Invisible Thread: A Portrait of Jewish American Women by Diana Bletter
Great Jewish Women by Elinor Slater
The New Rabbi: A Congregation Searches For Its Leader by Stephen Fried
The American Jews: Portrait of a Split-Personality by James Yaffe
Ben-Gurion, Prophet of Fire by Dan Kurzman
The Mystery of Being Jewish by Molly Cone
Where Are We? The Inner Life of America's Jews by Leonard J. Fein
Listen to the Trees: Jews and the Earth by Molly Cone
The Hanukkah Anthology by Philip Goodman
Sabbath: The Day of Delight by Abraham Ezra Millgram
Abba Eban: An Autobiography by Abba Solomon Eban
The Sukkot/Simhat Torah Anthology by Philip Goodman
The Jews in America: Four Centuries of an Uneasy Encounter by Arthur Hertzberg
The Vanishing American Jew: In Search of Jewish Identity for the Next Century by Alan M. Dershowitz
Great Jews in Sports by Robert Slater
Jew vs. Jew: The Struggle for the Soul of American Jewry by Samuel G. Freedman
The Rosh Hashanah Anthology by Philip Goodman
The Jews in Their Land by David Ben-Gurion
Bar-Kokhba: The Rediscovery of the Legendary Hero of the Second Jewish Revolt Against Rome by Yigael Yadin
How to Run a Traditional Jewish Household by Blu Greenberg
When General Grant Expelled the Jews by Jonathan D. Sarna
The Art of Jewish Living: The Passover Seder by Ron Wolfson
The American Jewish Album: 1654 to the Present by Allon Schoener
A Treasury of Jewish Humor: A Classic Collection of Humorous Stories, Satires and Witticism from the Rich Jewish Literature of All Times by Nathan Ausubel
Fewer