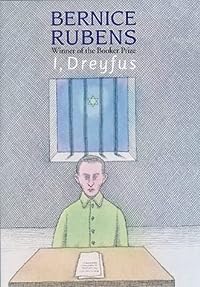 Sir Alfred Dreyfus, eminent headmaster of one of the greatest schools in England, is found guilty of a heinous crime. When Sam Temple, literary agent, visits Dreyfus in prison, he finds a man sunk beyond despair. As Dreyfus begins, reluctantly, the appalling narrative of his betrayal, he must confront, too, his own guilt for a lifetime's denial of his Jewish origins. Bernice Rubens has created a character of profound and moving humanity, in placing him at the end of the 20th century, she makes his story a tragedy, resonating with historical tragedy and bound in with the fate of six million others

LibraryThing member arubabookwoman
Bernice Rubens is an, I think, underrated 20th century British novelist. I've enjoyed several of her books. In this book, we meet Alfred Dreyfus former headmaster of a prestigious British public school now convicted of a heinous crime and writing his version of the events that led to his
Show More
imprisonment. From the beginning we are aware that the book concerns anti-Semitism, and the reference to the Dreyfus case of the early 20th century is deliberate. In her author's note, Rubens states, "This novel makes no attempt to update the Dreyfus story Rather it is concerned with the Dreyfus syndrome, which alas needs no updating." I won't say more about the plot, since Rubens is a master of plotting, and the unfolding of the story and the reveals along the way are part of the pleasure of reading the book.

I will say that as I was reading the book, I sometimes felt that the anti-Semitism (and alleged fears of being exposed as Jewish) were overstated and could not be real. (In the context of "normal" people--I'm not referring to extremists/terrorists). Then, shortly after I finished the book, a candidate for governor in Missouri committed suicide apparently over what he felt were unfair allegations that he had a Jewish background. So yes, I guess this is still a very real issue. In any event, this is a book that will stay with me.

Scum by Isaac Bashevis Singer
The Last of the Just by Andrae Schwarz-Bart
If Not Now, When? by Primo Levi
The Voices of Masada by David Kossoff