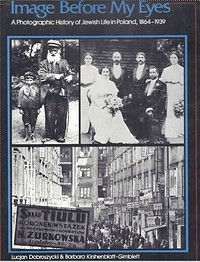 Image Before My Eyes: A Photographic History of Jewish Life in Poland, 1864-1939

"The Jews of Poland between the World Wars come alive in this photographic essay in all their diversities....One imagines that Polish Jewry would have wanted to be remembered thus -- looking out to the camera and the world beyond." -- Ruth R. Wisse "Reveals a vibrantly rich kaleidoscope of life using many great photographs, some known, others never seen before. A volume to read, to study, to treasure." -- Cornell Capa "Beautifully balanced to serve the fascinating truth of a civilization that vanished into the darkest folds of history....All this seems so distant and yet so familiar, for although they are gone, they are family, and it was just yesterday." -- Mark Helprin "A poignant and visually beautiful reconstitution of the varied, culturally rich, and endlessly fascinating lost world of Polish Jews. Reading it makes one glow with pride." -- Louis Begley "If you're Jewish and looking for your roots and the world of your grandfathers, this is the book for you. If you're not Jewish, but just curious, this book is for you....It can take you on a voyage into a world that vanished in the gas and smoke of the Holocaust." -- Lucy S. Dawidowicz "One of the most extraordinary photographic histories ever assembled....An entire people and culture, now gone from the face of the earth, comes forth from its pages with an animation and vitality so powerful that the tragedy of the end of Polish Jewry seems for a moment, miraculously suspended." -- Simon Schama From the Trade Paperback edition.… (more)

LibraryThing member RidgewayGirl
This is a collection of photographs of Jewish life in Poland from photography's advent to the Second World War. While many of these photographs were saved by people fleeing the holocaust, the emphasis is not on the coming horror, but on the the daily life of ordinary Jewish people during the first
Show More
half of the last century. There are many family portraits, as well as pictures of village and city life, giving a vibrant portrait of a time and place where a large minority population could live peacefully and were able to live in groups where they could live traditionally and practice their religion or to pursue modern lifestyles in cultural centers. Jewish theater and literature took off, with Yiddish newspapers and social clubs abundant in places like Warsaw.

What remains with me from the many photographs, is how the families, despite the different clothing and settings, look out at the photographers with the same pride and optimism that is visible in family portraits today. And also the enormous labor involved in keeping those white dresses and shirts clean and starched.
Show Less

The Precious Legacy: Judaic Treasures from the Czechoslovak State Collection by David A. Altshuler
A Vanished World by Roman Vishniac
Leo Rosten's Treasury of Jewish Quotations by Leo Calvin Rosten
Upon the Doorposts of Thy House: Jewish Life in East-Central Europe, Yesterday and Today by Ruth Ellen Gruber
Growing up Jewish: An Anthology by Jay David
16 more
My Country: The Story of Modern Israel by Abba Solomon Eban
Shtetl: The Life and Death of a Small Town and the World of Polish Jews by Eva Hoffman
Life Is With People: The Culture of the Shtetl by Mark Zborowski
A Feast of History: The Drama of Passover through the Ages by Chaim Raphael
Poyln: Jewish Life in the Old Country by Alter Kacyzne
The Jews: A Treasury of Art and Literature by Sharon R. Keller
Konin: A Quest by Theo Richmond
Encyclopedia of Jewish Humor: From Biblical Times to the Modern Age by Henry D. Spalding
How We Lived: A Documentary History of Immigrant Jews in American, 1880-1930 by Irving Howe
Jewish Renewal: A Path to Healing and Transformation by Michael Lerner
Great Jewish Women by Elinor Slater
The Artists of Terezin by Gerald Green
The Jews in America by David Cohen
While Six Million Died: A Chronicle of American Apathy by Arthur D. Morse
The Abandonment of the Jews: America and the Holocaust, 1941-1945 by David S. Wyman
From Generation to Generation: How to Trace Your Jewish Genealogy and Personal History by Arthur Kurzweil
Fewer