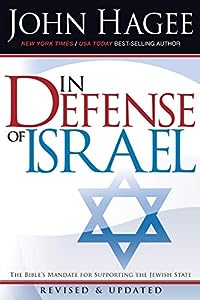 In Defense of Israel

Why is the Middle East in such turmoil? Is the modern State of Israel in the plan of God? Can and should Christians do more than pray for Israel? Does God’s Word contain instructions to Christians regarding the treatment of Jewish people? In the near-thirty years John Hagee has been a lover of Israel, he has grappled with each of these questions. Most Christians today don’t know much about the Jewish faith or the history of the Jewish nation. They don’t understand what is truly at stake in the Middle East conflict and why Christians need to do more than just pray for the peace of Jerusalem. They don’t know the role they’ve been called to play in relationship with Israel, and they aren’t sure how God feels about Israel today, either. As Hagee guides readers through the scriptures that explain why Christians need to stand with Israel and the Jews today with as much fervor as God does, they will encounter a man deeply passionate about loving this historic people of God. They’ll be inspired to take up that same mantle of love and play a part in extending acceptance and favor to the people of Israel, just as God has called them to do.… (more)

NiceneCouncil.com
Hagee demands that “evangelicals” must recognize of the Jews that “we are spiritual brothers” (p. 173) and that he is seeking “reconciliation with my Jewish brothers” (p. 35). Can we call someone a “brother” who rejects Christ (1John 4:2-3; 5:1)? Is not Christianity superior to
Show More
Judaism? And are not Christ’s words against the Jews who reject him quite strong? “And I say to you, that many shall come from east and west, and recline at the table with Abraham, and Isaac, and Jacob, in the kingdom of heaven; but the sons of the kingdom shall be cast out into the outer darkness; in that place there shall be weeping and gnashing of teeth” (Matt 8:11-12). How can we deem our Jewish friends to be our “spiritual brothers,” if we hold to the New Testament? In conclusion, this book should have a label on it warning the readers: “Contains doctrine that is hazardous to your spiritual health.” He at least could have titled it “Leave Behind,” as a suggestion as to what we should do with it.
Show Less

Standing with Israel by David Brog
Bondi's Brother: A Story of Love, Loss, Betrayal and Liberation by Irving Roth
Coming Home to Zion: A Pictorial History of Pre-Israel Palestine by Abraham Shulman