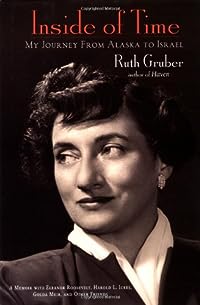 Inside of Time: My Journey from Alaska to Israel

The intrepid journalist and Holocaust refugee champion "gives a commonplace appeal to the momentous events with her ingenuous storytelling" (Kirkus Reviews). Drawing from hundreds of notebooks accumulated throughout her career, Gruber's breathtaking memoir spans some of the most significant events of the twentieth century, covering the years 1941 to 1952. She details her eighteen months spent surveying Alaska on behalf of the United States government, her role assisting Holocaust refugees' emigration from war-torn Europe, and her relationships with some of the most important figures of the era, including Eleanor Roosevelt and Golda Meir. Gruber describes these eleven years of her inspiring life with clarity and insight, providing an extraordinary inside look at some of the twentieth century's turning points.… (more)

Ahead of Time: My Early Years as a Foreign Correspondent by Ruth Ellen Gruber
Deborah, Golda, and Me: Being Female and Jewish in America by Letty Cottin Pogrebin
I Seek My Brethren: Rescue, Relief and Reconstruction -- The Work of the American Jewish Joint Distribution Committee Ralph Goldman and "The Joint" by Tom Shachtman
Ellis Island to Ebbets Field: Sport and the American Jewis Experience by Peter Levine
The Jews: Story of a People by Howard Fast
6 more
Where Are We? The Inner Life of America's Jews by Leonard J. Fein
The Mezuzah in the Madonna's Foot: Oral Histories Exploring 500 Years in the Paradoxical Relationship of Spain and the Jews by Trudi Alexy
The Jewish Family Book by Sharon Strassfeld
The Jews in America: The Roots, History, and Destiny of American Jews by Max I. Dimont
Rembrandt, the Jews and the Bible by Franz Landsberger
Personal Witness: Israel Through My Eyes by Abba Solomon Eban
Fewer