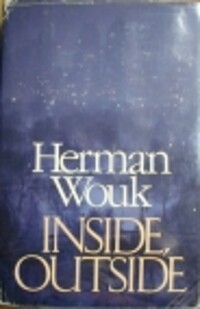 Inside, Outside a novel

From Pulitzer Prize-winning American author Herman Wouk, Inside, Outside is a rich and compelling story - beautifully focused and often hilarious.... Israel David Goodkind is a minor bureaucrat in the Nixon White House, killing empty office time by writing the story of four generations of his large, sprawling Russian Jewish immigrant family. As he recounts his brief stint in show business, his torrid affair with a showgirl, and his encounters with a hassled and distracted President Nixon, Goodkind also witnesses historical events firsthand - the Watergate scandal, the Yom Kippur War - and eventually finds his way back to his Jewish faith. Combining Wouk's wildly funny streak with deeply religious passages - and some intensely intimate romantic scenes rare in this reticent author's work - Inside, Outside is a striking departure from the traditional storytelling mode in which the author has won international fame, and yet it may be the most truly characteristic of all his writings. Written in the first person in a free-form, often ribald style, playing antic tricks with time, it offers all the passion, depth, historical detail, and humor that has made Wouk a best-selling author around the world.… (more)

LibraryThing member santhony
I’ve read numerous works by Herman Wouk and generally been well pleased. On occasion, I’ve encountered what I consider to be masterpieces (Caine Mutiny for example) and this book belongs in that category. Told from the viewpoint of a very religious and educated Jewish advisor to Richard Nixon
Show More
during the Watergate crisis, this novel examines the advisor’s current life and his background through the use of flashbacks. Both story lines are extremely compelling and the examinations of his early years through anecdotes involving his immigrant Jewish family members (from Minsk and Lithuania) are spellbinding.
I’ve read numerous other novels (some by Wouk) focusing on Jewish characters that were much more difficult to read, due to the extensive reference to Jewish culture and Yiddish terminology. That is not the case with this novel. Where cultural disconnects are possible, Wouk goes to great pains to explain them. As a gentile, I found this book remarkably easy to read and understand, even in the deepest recesses of Old World Jewish enclaves.
The title of the book refers to the authors dual life, both “inside” the confines of his religious cocoon and “outside”, in the secular world where his advanced intelligence and education have allowed him to rise to the top of his profession (tax attorney) and into a role in the Nixon administration (despite his Democratic politics). The internal tensions involved in both of these dichotomies are fascinating as they play out through the novel.
Of additional interest are the historical events which provide the backdrops for the novel. The aforementioned Watergate crisis is a constant factor in the author’s “current” life, as is the 1973 Yom Kippur War between Israel and the surrounding Arab states. The Great Depression is a looming force in the flashbacks to his past. All in all, an outstanding novel and one that I highly recommend.
Show Less
2 more
LibraryThing member rcooper3589
My parents have been trying to get me to read this book for years. Each time the book came up I would be told of how they first read it: the copy my dad was reading was falling apart and as he was done with chapters he would hand the pages to my mother as they read before bed. So, after listening
Show More
to my parents praise the book for so long I finally picked it up. And while I don't like to acknowledge when my parents are right- like most kids, I'm sure!- I loved this novel! Wouk's insight into growing up Jewish in America is right on. While I am not a daughter of immigrant Orthodox parents, I could clearly identify with the main character, David. I enjoyed following David as he grew up and tried to balance the Jewish traditions of his family in a non-Jewish society. I also liked how Wouk showed us a guy who was involved with a woman in a difficult relationship- I feel too often books about guys never show the hero in a submissive role in a relationship, while female heroes always seem to land themselves in this position. I also liked how there were memories David had that no one else seemed to remember- or at least not in the same way David did. I liked that bit of reality. Honestly, I could go on and on about this book. Basically, just go out and read it. You will not be disappointed!

FAVORITE QUOTE(S): Lee thrives on her grudges; I guess they generate adrenaline, which is good for her arthritis, and it's free, unlike cortisone, which costs like the devil. // "We're home." Those are perhaps the sweetest words in human speech after "I love you." // Jake was Jewish. He had to be, he an accent like my father's. Anyway, he felt Jewish. I don't know how else to put it. // My public library card, I should explain, was the joy of my life. I had long since read through all the fairy tales and boys' books, and lately had been taking out the fattest books I could find- I guess, to impress the librarians. // A young man traveling with money in his pocket collects girls as a blue serge suit picks up lint.
Show Less
LibraryThing member jayne_charles
One of the funniest books I have ever read, a warm family-based insight into Jewish life. Some of the Israel sections I found impenetrable, so not quite a five-star for me, but thoroughly enjoyable nonetheless
Fewer

The Hope a novel by Herman Wouk
The Glory a novel by Herman Wouk
Mitla Pass by Leon Uris
Stars of David: Prominent Jews Talk About Being Jewish by Abigail Pogrebin
Chutzpah by Alan M. Dershowitz
23 more
The Oath by Elie Wiesel
A Beggar in Jerusalem by Elie Wiesel
Deborah, Golda, and Me: Being Female and Jewish in America by Letty Cottin Pogrebin
Jewish and Female: Choices and Changes in Our Lives Today by Susan Weidman Schneider
The Fifth Son by Elie Wiesel
In the Beginning by Chaim Potok
A Jew Today by Elie Wiesel
The Second Jewish Catalog: Sources & Resources by Sharon Strassfeld
The Jewish Family Book by Sharon Strassfeld
The Book of Abraham by Marek Halter
Great Jews in Sports by Robert Slater
The Shavuot Anthology by Philip Goodman
The Shtetl: A Creative Anthology of Jewish Life in Eastern Europe by Joachim Neugroschel
This Is My God by Herman Wouk
The Rise of David Levinsky by Abraham Cahan
As a Driven Leaf by Milton Steinberg
The Melting Pot: An Adventure in New York by Kenneth Roseman
The Outsider by Howard Fast
A Certain People: American Jews and Their Lives Today by Charles E. Silberman
Written Out of History: Our Jewish Foremothers by Sondra Henry
The Book of Lights by Chaim Potok
To Raise a Jewish Child: A Guide for Parents by Hayim Donin
How to Get More Out of Being Jewish even if you are not sure you believe in God, you think going to synagogue is a waste of time, you think keeping kosher is stupid, you hated Hebrew school, or all of the above by Gil Mann
Fewer