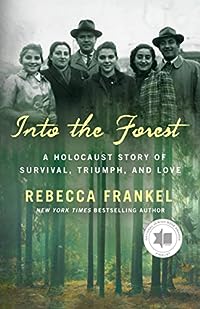 Into the Forest a Holocaust story of survival, triumph, and love

"Rebecca Frankel's Into the Forest is a gripping story of love, escape, and survival, from wartime Poland to a wedding in Connecticut. In the summer of 1942, the Rabinowitz family narrowly escaped the Nazi ghetto in their Polish town by fleeing to the forbidding Bialowieza Forest. They miraculously survived two years in the woods-through brutal winters, Typhus outbreaks, and merciless Nazi raids-until they were liberated by the Red Army in 1944. After the war they trekked across the Alps into Italy where they settled as refugees before eventually immigrating to the United States. During the first ghetto massacre, Miriam Rabinowitz rescued a young boy named Philip by pretending he was her son. Nearly a decade later, a chance encounter at a wedding in Brooklyn would lead Philip to find the woman who saved him. And to discover her daughter Ruth was the love of his life. From a little-known chapter of Holocaust history, one family's inspiring true story of love, escape, and survival"--… (more)

Once the Nazi regime
Show More
started their “selections” the Rabinowitz family knew they had to escape the ghetto and take their chances living in the forest. Their ingenuity, patience and bravery were what drove them to successfully escape the ghetto and then survive two brutal winters in the forest. Typhus, starvation, freezing and the risk of capture were ever-present challenges to overcome.

Liberated by the Red Army, the family eventually crossed into Italy and lived for a time as refugees before making their way into the United States, where they were reacquainted with a young man who survived the same ghetto, thanks to Mrs. Rabinowitz.

I found their journey after being liberated just as interesting as their time in the forest, though not as harrowing. History lovers and those who enjoy inspiring stories will not want to miss this book.

Many thanks to NetGalley and St. Martin’s Press for allowing me to read an advance copy. I am happy to give my honest review.
Show Less
LibraryThing member muddyboy
The story of one families (Rabinowitz) survival during the Holocaust in Poland. During WW2 their town is taken over by the Russian army. Things are bad but livable. Then the Nazis move in and force them to move into a Jewish ghetto. When life becomes unbearable they flee into the forest where they
Show More
are forced to hide for two years. What I like about the book is though they suffer greatly and lose some distant family members and friends the immediate Rabinowitz family including two young girls survive and rebuild their lives after the war. A testament to courage.
Show Less
LibraryThing member Stbalbach
Pretty well done, it is about specific people and events, but their story was shared by many. It helped me better understand not only the awful details of the holocaust which are well known by this point, but the full story from beginning to end when they emigrate to the USA, the relationships
Show More
among families, it is more humane than a Schindler's List horror-story, thus more relatable. I think the part before the woods is best, the chaos and upheavals, the selections and mass shootings, hiding and escape. Once in the woods, I had a hard time visualizing as time is compressed and there are not the sort of dramatic events as earlier.
Show Less
Fewer

People Love Dead Jews: Reports from a Haunted Present by Dara Horn
How to Fight Anti-Semitism by Bari Weiss
Bluebird by Sharon Cameron