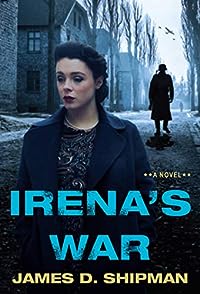 September 1939- The conquering Nazis swarm through Warsaw as social worker Irena Sendler watches in dread from her apartment window. Already, the city's poor go hungry. Irena wonders how she will continue to deliver food and supplies to those who need it most, including the forbidden Jews. The answer comes unexpectedly. Dragged from her home in the night, Irena is brought before a Gestapo agent, Klaus Rein, who offers her a position running the city's soup kitchens, all to maintain the illusion of order. Though loath to be working under the Germans, Irena learns there are ways to defy her new employer--including forging documents so that Jewish families receive food intended for Aryans. As Irena grows bolder, her interactions with Klaus become more fraught and perilous. Klaus is unable to prove his suspicions against Irena--yet. But once Warsaw's half-million Jews are confined to the ghetto, awaiting slow starvation or the death camps, Irena realizes that providing food is no longer enough. Recruited by the underground Polish resistance organization Zegota, she carries out an audacious scheme to rescue Jewish children. One by one, they are smuggled out in baskets and garbage carts, or led through dank sewers to safety--every success raising Klaus's ire. Determined to quell the uprising, he draws Irena into a cat-and-mouse game that will test her in every way--and where the slightest misstep could mean not just her own death, but the slaughter of those innocents she is so desperate to save.… (more)

LibraryThing member susan0316
I enjoy reading historical fiction and it's an added bonus for me if the story is based on real people. This novel is an interesting look at Irena Sendler and the heroic efforts that she took to help the people in the Warsaw Ghetto and helped to save thousands of children from certain death.

Irena's
Show More
War begins in September, 1939, when the Nazis swarm into Warsaw and take over Poland. Before the war started, she was a social worker whose main job was to distribute food to the people of Warsaw. She had a network of farmers who provided fresh food and volunteers who worked in the soup kitchens. She was afraid that her efforts to feed the people would come to an end when the war started and was surprised to be offered a job by the Germans to keep working to provide food to the poor. She's not sure if she wants to work for the Germans but decides that keeping the Polish people fed is her main task and decides to accept the job. She's instructed not to provide food for Jewish people but she soon learns how to forge documents so that the Jewish people can receive food. When she is no longer able to help those who need it most, she volunteers to work as a health care person in the Ghetto. She begins to work with the Resistance and starts helping children escape. She brings them out in garbage bins and she brings them out through the sewers and overall she was successful in saving over 2,500 children from the ghetto working with the Polish resistance. When she is captured by the Germans, she goes through extreme torture as they try to get her to name the people in the resistance but even with the inhumane treatment, she managed to give them false information and was able to escape.

Irena Sendler was a strong woman who was able to help many during the War. In 1965, Yad Vashem, Israel's Holocaust memorial organization, named Sendler as Righteous Among the Nations for her work saving Jewish children. In 2003, Poland honored her with its Order of the White Eagle. In 2008, Sendler was nominated for (but did not win) a Nobel Peace Prize. She died in 2008.

James Shipman is a new author for me and after reading Irena's War, I plan to read some of his earlier books. If you enjoy reading about strong women who work to change their world, this is a book that you don't want to miss.
Show Less

The Brothers of Auschwitz by Malka Adler
The Flight Portfolio by Julie Orringer
Send for Me: A novel by Lauren Fox
The Postmistress of Paris: A Novel by Meg Waite Clayton
The Book of Lost Names by Kristin Harmel
4 more
The Woman with the Blue Star: A Novel by Pam Jenoff
The Woman Who Smashed Codes a true story of love, spies, and the unlikely heroine who outwitted America's enemies by Jason Fagone
The Auschwitz Escape by Joel C. Rosenberg
The Tattooist of Auschwitz a novel by (Screenwriter) Heather Morris
Fewer