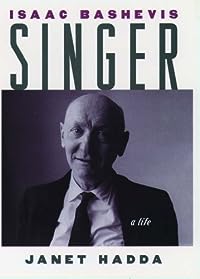 Isaac Bashevis Singer, winner of the Nobel Prize in 1978, was the greatest Yiddish writer of the 20th century, a profoundly important voice in world literature, and an invaluable witness to the vanishing culture of Eastern European Jews. He was also a consummate storyteller. In such classicshort stories as "Gimpel the Fool," "Short Friday," and "Yentl," and such acclaimed novels as The Family Moskat and Enemies, A Love Story, Singer combined a subtle psychological insight, deep sympathy for the eccentricities of Jewish folk custom, and an unerring feel for the heroism of everydaylife. In doing so, he brought before the English-speaking world the vibrant milieu of pre-Holocaust Polish Jewry and provided an insight into human character and culture unsurpassed in our time.In Isaac Bashevis Singer, Janet Hadda brings her dual expertise--as a practicing psychoanalyst and a Yiddish literary scholar--to this illuminating study of Singer's life and work. Drawing on extensive interviews with his wife, his translators, and fellow writers, and using original Yiddishsources, Hadda traces Singer's remarkable trajectory from the grinding poverty of Bilgoray, Poland, to his early struggles and paralyzing self-doubts as a lonely immigrant in New York in the 1930s, and finally to his rise to the pinnacle of literary fame. Hadda views Singer's personal life throughthe lens of his troubled relationships with his brilliant family. She discusses for the first time the critical role his sister and brother--both literary figures in their own right--played in his emotional and intellectual development. We see, for example, the close resemblance between hisepileptic sister and the demonically possessed heroine of Satan in Goray, and learn how Singer's admiration for and competition with his brother, Israel Joshua, both spurred and inhibited his own artistic growth. Hadda also explores how opposing parental forces--his effeminate rabbi father andmasculine rationalist mother--bequeathed to Singer a set of contradictions and a loneliness that would haunt his entire life. Despite his famous memoir, In My Father's Court, which idealizes his parents, Hadda shows a childhood that left him deeply neglected and from which he turned to fiction forescape and compensation. His sense of isolation intensified in adulthood with the knowledge that the Yiddish-speaking audience for whom he wrote and whose world provided the foundation for his work was disappearing. Debilitating depression, epic womanizing, estrangement from his brother, sister, andson all contributed to a private personality far different from the simple, grandfatherly self his readers perceived. Indeed, vast discrepancies existed between his public, private, and several literary personas. The naive voice of Jewish folk culture was also a sophisticated artist, an acerbiccritic and, in the view of some (most notably, Saul Bellow), a calculating careerist. Hadda's account gives us, in the end, an enormously complicated man profoundly afflicted by the contradictions of his historical circumstance and personal suffering who was yet able to transform his burdens into amarvelously compassionate literature.Compellingly written, filled with vivid detail, telling anecdote, and a wealth of fresh insight, Isaac Bashevis Singer reveals the complex array of historical, familial, cultural, and artistic forces that shaped one of this century's most eminent literary figures.… (more)

A Land of Our Own: An Oral Autobiography by Golda Meir
In My Father's Court: A Memoir by Isaac Bashevis Singer
The Shtetl: A Creative Anthology of Jewish Life in Eastern Europe by Joachim Neugroschel
The Image of the Jew in American Literature: From Early Republic to Mass Immigration by Louis Harap
To Jerusalem and Back: A Personal Account by Saul Bellow
8 more
The Ultimate Bar/Bat Mitzvah Celebration Book: A Guide to Inspiring Ceremonies and Joyous Festivities by Jayne Cohen
The Shengold Jewish Encyclopedia by Mordecai Schreiber
The Shadows Within: Essays on Modern Jewish Writers by Gershon Shaked
Judaism as a Civilization: Toward a Reconstruction of American Jewish Life by Mordecai Menahem Kaplan
Old Love by Isaac Bashevis Singer
The Jewish Writer by Jill Krementz
Taking Judaism Personally: Creating a Meaningful Spiritual Life by Judy Petsonk
Ben-Gurion, Prophet of Fire by Dan Kurzman
Fewer