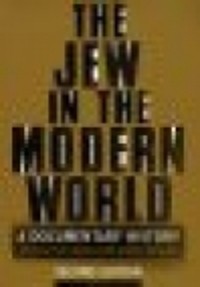 The Jew in the Modern World: A Documentary History

Synopsis: The last two centuries have witnessed a radical transformation of Jewish life. Marked by such profound events as the emancipation from the ghettoes of Europe, the Holocaust and the establishment of the State of Israel, Judaism's long journey through the modern age has been a complex and tumultuous one, leading many Jews to ask themselves not only where they have been and where they are going, but what it means to be a Jew in today's world. Tracing the dramatic changes in Jewish religion, culture, and identity from the seventeenth century to the present, The Jew in the Modern World, Third Edition, remains the most complete sourcebook on modern Jewish history available. Now thoroughly expanded and updated, this critically acclaimed volume of primary materials features previously unpublished and inaccessible sources concerning the Jewish experience in Eastern Europe, the Middle East, and North Africa; women in Jewish history; American Jewish life; the Holocaust; and Zionism and the nascent Jewish community in Palestine on the eve of the establishment of the State of Israel. The documents are arranged chronologically in each chapter and are meticulously and extensively annotated and cross-referenced. Providing useful tables detailing Jewish demographic trends, this unique text is ideal for courses in modern Jewish history, Zionism and Israel, the Holocaust, or modern European history. New to this Edition: Over 100 new documents address important issues to understanding modern Jewish history, including the status of women, and debates between traditional and secular Jews and the role of Zionism in modern Jewish life; Two entirely new chapters-Chapter 8, "Sephardi and Middle Eastern Jewry," and Chapter 12, "Jewish Identity Challenged and Redefined"--Enhance the book's scope and chronology; Four new maps show the concentration of Jews throughout the Mediterranean and Middle East. The Appendix has been completely updated with the latest population figures.… (more)

The Jew in the Medieval World: A Source Book, 315-1791 by Jacob Rader Marcus
The Jews of Arab Lands: A History and Source Book by Norman A. Stillman
The Vanishing American Jew: In Search of Jewish Identity for the Next Century by Alan M. Dershowitz
What Is the Use of Jewish History? essays by Lucy S. Dawidowicz
A Certain People: American Jews and Their Lives Today by Charles E. Silberman
17 more
The Golden Tradition: Jewish Life and Thought in Eastern Europe by Lucy S. Dawidowicz
Jew vs. Jew: The Struggle for the Soul of American Jewry by Samuel G. Freedman
On Women and Judaism: A View from Tradition by Blu Greenberg
Jewish Literacy: The Most Important Things to Know About the Jewish Religion, Its People, and Its History by Joseph Telushkin
A History of the Jewish People by Haim Hillel Ben-Sasson
The Rosh Hashanah Anthology by Philip Goodman
The Illustrated History of the Jewish People by N. R. M. De Lange
Jewish People, Jewish Thought: The Jewish Experience in History by Robert M. Seltzer
The Purim Anthology by Philip Goodman
Great Jewish Women by Elinor Slater
Back to the Sources: Reading the Classic Jewish Texts by Barry W. Holtz
Sabbath: The Day of Delight by Abraham Ezra Millgram
On Being a Jewish Feminist by Susannah Heschel
Stars of David: Prominent Jews Talk About Being Jewish by Abigail Pogrebin
The Sukkot/Simhat Torah Anthology by Philip Goodman
Life Is With People: The Culture of the Shtetl by Mark Zborowski
The New Jewish Wedding by Anita Diamant
Fewer