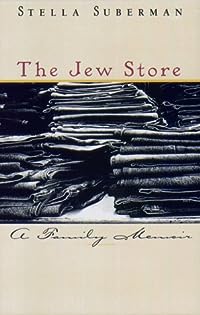 The Jew Store: A Family Memoir

In 1920, in small-town America, the ubiquitous dry goods store was usually owned by Jews and often referred to as "the Jew store." That's how Stella Suberman's father's store, Bronson's Low-Priced Store, in Concordia, Tennessee, was known locally. The Bronsons were the first Jews to ever live in that tiny town of one main street, one bank, one drugstore, one picture show, one feed and seed, one hardware, one barber shop, one beauty parlor, one blacksmith, and many Christian churches. Aaron Bronson moved his family all the way from New York City to Tennessee to prove himself a born salesman-and much more.Told by Aaron's youngest child, The Jew Store is that rare thing-an intimate family story that sheds new light on a piece of American history. With a novelist's sense of scene, suspense, and above all, characterization, Stella Suberman turns the clock back to a time when rural America was more peaceful but no less prejudiced, when educated liberals were suspect, and when the Klan was threatening to outsiders. In that setting, she brings to life her remarkable father, a man whose own brand of success proves that intelligence, empathy, liberality, and decency can build a home anywhere.… (more)

LibraryThing member tloeffler
This is not a book that I would ever have picked up on my own. In fact, I dreaded having to read it. At the risk of sounding racist (which I most assuredly am not), I was afraid of another sad book about the horrible trials that a minority group has to weather. Instead, I found a truly delightful
Show More
memoir. Aaron Bronson (nee Avram Droskowitz) left Russia for America, married a nice Jewish girl in New York, then headed south to Nashville. Apparently, in 1920s America, the dry goods stores in small towns were usually owned by Jews and called "the Jew store." The family moves to a small Tennessee town (Suberman has changed the name of the town and its inhabitants) and opens "Bronson's Low-Priced Store."
I think what I liked best about the book was the combination of ups and downs experienced by the family. They were part of the community, and became an integral part of the town's life. Yes, there were challenges, and they aren't glossed over, but there is always the mindset that this is how things happened at that time and place. A very enjoyable read.
Show Less
5 more
LibraryThing member etxgardener
In the South every town had a "Jew Store;" a place that sold low-priced goods to factqory workers, farmers, and even blacks (if only through the back door by the alley). Stella. Suberman's memoir tells the story of her fsmily's store in a small town in Tennessee and is rich with the details of
Show More
small town southern life in the 1920's & 1930's when Jews were unusual, exotic creatures - not trusted and with a status hardly higher than the black people they routinely ordered about.

I frequently gots aggravated at Ma. Suberman's mother, who had the hardest time adapting of Athe whole family, but when I considered just how difficult it is to be different in a small town anywhere, especially I. The South and I became more charitable in my assessment.

Filled with detail and written with bittersweet affection, this was a heartwarming read.
Show Less
LibraryThing member suesbooks
This was a quick read of a poorly edited book. However, I found it interesting to learn about the culture presented by the author. She could have gone in to much more depth, but that is not the book she wrote.
LibraryThing member jkrnomad
This is a fascinating memoir of growing up in the Deep South during the 1920's. The Bronson family has to deal with layer after layer of American culture, first in New York City, where they find a tight immigrant community, and then in rural Tennessee where they are the only Russian Jewish
Show More
immigrants and complete outsiders.
Show Less
LibraryThing member Carmenere
Ms. Suberman writes a sweet, loving memoir of her Jewish Russian immigrant parents and her siblings. Her father, known as Aaron in the book, moves his family from everything and everyone they know and love in NYC to, in 1920, a very rural corner of Tennessee.
The conditions are difficult,
Show More
discrimination and prejudice are especially directed to Jewish, Catholic and people of color. The Klu Klux Klan is alive and well, approving or disapproving what they choose.
Aaron, however, is a patient and intelligent business man and in just a short period of time his "Jew Store" aka Bronson's Low Priced Store is in business and providing dry goods to farm families in the area.
All is not well with his wife, Reba. She misses the closeness of extended family and doesn't understand the Southern way of life. She laments the fact that there is no Jewish temple for her son to make Bar Mitzvah.
In a light-hearted manner, the author reveals how her family worked through these obstacles with eventual understanding and grace.
Show Less
LibraryThing member suesbooks
I read this book a second time for a different book group. I was not looking forward to it, but the poor writing did not bother me as much as previously, and I found the writer's life and comments as a member of the only Jewish family in a Southern town quite interesting.
Fewer

Stars of David: Prominent Jews Talk About Being Jewish by Abigail Pogrebin
Deborah, Golda, and Me: Being Female and Jewish in America by Letty Cottin Pogrebin
Great Jews in Sports by Robert Slater
A Certain People: American Jews and Their Lives Today by Charles E. Silberman
Turbulent Souls: A Catholic Son's Return to His Jewish Family by Stephen J. Dubner
21 more
Great Jewish Women by Elinor Slater
Finding God: Ten Jewish Responses ten Jewish responses by Rifat Sonsino
Chutzpah by Alan M. Dershowitz
The American Jewish Album: 1654 to the Present by Allon Schoener
The Jews in America by David Cohen
Jewish and Female: Choices and Changes in Our Lives Today by Susan Weidman Schneider
The Ladies Auxiliary by Tova Mirvis
How to Get More Out of Being Jewish even if you are not sure you believe in God, you think going to synagogue is a waste of time, you think keeping kosher is stupid, you hated Hebrew school, or all of the above by Gil Mann
The Purim Anthology by Philip Goodman
The Mezuzah in the Madonna's Foot: Oral Histories Exploring 500 Years in the Paradoxical Relationship of Spain and the Jews by Trudi Alexy
Jew vs. Jew: The Struggle for the Soul of American Jewry by Samuel G. Freedman
Growing up Jewish: An Anthology by Jay David
The Big Book of Jewish Humor by William Novak
On Women and Judaism: A View from Tradition by Blu Greenberg
I am Jewish: Personal Reflections Inspired by the Last Words of Daniel Pearl by Judea Pearl
The Jewish Holidays: A Guide and Commentary by Michael Strassfeld
Life Is With People: The Culture of the Shtetl by Mark Zborowski
Bread Givers by Anzia Yezierska
Putting God on the Guest List: How to Reclaim the Spiritual Meaning of Your Child's Bar or Bat Mitzvah by Jeffrey K. Salkin
Sabbath: The Day of Delight by Abraham Ezra Millgram
The Vanishing American Jew: In Search of Jewish Identity for the Next Century by Alan M. Dershowitz
Fewer