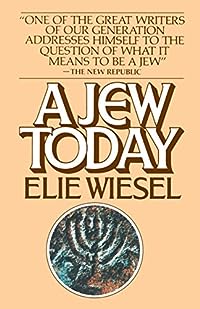 In this powerful and wide-ranging collection of essays, letters and diary entries, weaving together all the periods of the author's life -- from his childhood in Transylvania to Auschwitz and Buchenwald, Paris, New York -- Elie Wiesel, acclaimed as one of the most gifted and sensitive writers of our time, probes, from the particular point of view of his Jewishness, such central moral and political issues as Zionism and the Middle East conflict, Solzhenitsyn and Soviet anti-Semitism, the obligations of American Jews toward Israel, the Holocaust and its cheapening in the media.

A Beggar in Jerusalem by Elie Wiesel
Legends of Our Time by Elie Wiesel
The Oath by Elie Wiesel
Memoirs: All Rivers Run to the Sea by Elie Wiesel
Night / Dawn / Day by Elie Wiesel
23 more
And the Sea is Never Full: Memoirs, 1969 by Elie Wiesel
Life Is With People: The Culture of the Shtetl by Mark Zborowski
Souls on Fire: Portraits and Legends of Hasidic Masters by Elie Wiesel
The Jews of Silence: A Personal Report on Soviet Jewry by Eliezer Wiesel
Deborah, Golda, and Me: Being Female and Jewish in America by Letty Cottin Pogrebin
The Golden Tradition: Jewish Life and Thought in Eastern Europe by Lucy S. Dawidowicz
The Vanishing American Jew: In Search of Jewish Identity for the Next Century by Alan M. Dershowitz
From the Kingdom of Memory: Reminiscences by Elie Wiesel
Chutzpah by Alan M. Dershowitz
Future Tense: Jews, Judaism, and Israel in the Twenty-First Century by Jonathan Sacks
How to Get More Out of Being Jewish even if you are not sure you believe in God, you think going to synagogue is a waste of time, you think keeping kosher is stupid, you hated Hebrew school, or all of the above by Gil Mann
A Certain People: American Jews and Their Lives Today by Charles E. Silberman
Night by Elie Wiesel
The Town Beyond the Wall by Elie Wiesel
The Fifth Son by Elie Wiesel
Four Hasidic Masters and Their Struggle Against Melancholy by Elie Wiesel
Messengers of God: Biblical Portraits and Legends by Elie Wiesel
To Raise a Jewish Child: A Guide for Parents by Hayim Donin
Jewish and Female: Choices and Changes in Our Lives Today by Susan Weidman Schneider
The Service of the Heart: A Guide to the Jewish Prayer Book by Evelyn Garfiel
A Feast of History: The Drama of Passover through the Ages by Chaim Raphael
Great Jews in Sports by Robert Slater
The Rosh Hashanah Anthology by Philip Goodman
Fewer