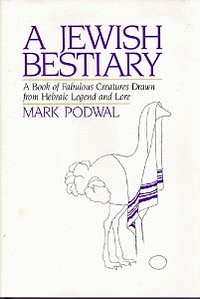 A Jewish Bestiary: A Book of Fabulous Creatures Drawn from Hebraic Legend and Lore

"Ask the beast and it will teach thee, and the birds of heaven and they will tell thee." --Job 12:7 In the Middle Ages, the bestiary achieved a popularity second only to that of the Bible. In addition to being a kind of encyclopedia of the animal kingdom, the bestiary also served as a book of moral and religious instruction, teaching human virtues through a portrayal of an animal's true or imagined behavior. In A Jewish Bestiary, Mark Podwal revisits animals, both real and mythical, that have captured the Jewish imagination through the centuries. Originally published in 1984 and called "broad in learning and deep in subtle humor" by the New York Times, this updated edition of A Jewish Bestiary features new full-color renderings of thirty-five creatures from Hebraic legend and lore. The illustrations are accompanied by entertaining and instructive tales drawn from biblical, talmudic, midrashic, and kabbalistic sources. Throughout, Podwal combines traditional Jewish themes with his own distinctive style. The resulting juxtaposition of art with history results in a delightful and enlightening bestiary for the twenty-first century. From the ant to the ziz, herein are the creatures that exert a special force on the Jewish fancy.… (more)

LibraryThing member break
There is a whole genre of books I was not aware of: the bestiaries. It originated before the printing press was developed but that helped to spread the concept. It was a collection of real and imagined beasts, often based or drawn from the Christian and Jewish Bibles. I learned this and much more
Show More
from Mark Podwal's short (three and a half pages long) but information preface to "A Jewish Bestiary: a Book of Fabulous Creatures Drawn from Hebraic Legend and Lore."

The bulk of the book is made up from the description and drawing of 25 of such animals. Each got one page (or less) of text and a full page simple line drawing. The latter always more than just a drawing of an animal: it included an object a-or background or position that connected the animal with its characteristics as envisioned by the Bible and later sacred literature, e.g. Talmud, Midrash…

I recommend reading the stories for each animal. Some of them will sound familiar (e.g. the sly fox from Aesop, the great fish swallowing Jonah, but others may surprise you (e.g. the pious stork or the salamander that can protect you from fire. These stories were recounted with gentle humor and were fun to read. Below is a full list of creatures you can find in the book. For this overview I just picked one feature for each animal, but often there is more.


I have only two regrets about this book. One is the lack of citations. In this current format it is rather enjoyable but it is hard to find the original sources if one wants to dig further. The short biography at the end helps, but it only has 14 entries. The other caveat is the lack of niqqud, pointing in the Hebrew text to show vowels. At the bottom of the page you can find the Hebrew name of each beast, but I, not having classical Jewish education I am not familiar with all and cannot necessarily pronounce them all correctly. But these are minor issues; otherwise the book was a joyous way to educate myself about a neglected aspect of Jewish folklore.
Show Less

The New Jewish Baby Book: Names, Ceremonies & Customs -- A Guide for Today's Families by Anita Diamant
Great Jews in Sports by Robert Slater
Deborah, Golda, and Me: Being Female and Jewish in America by Letty Cottin Pogrebin
A Certain People: American Jews and Their Lives Today by Charles E. Silberman
Bar-Kokhba: The Rediscovery of the Legendary Hero of the Second Jewish Revolt Against Rome by Yigael Yadin
15 more
The Jewish Woman: New Perspectives by Elizabeth Koltun
The Third Jewish Catalog: Creating Community by Sharon Strassfeld
The Shavuot Anthology by Philip Goodman
Jewish and Female: Choices and Changes in Our Lives Today by Susan Weidman Schneider
The Mystery of Being Jewish by Molly Cone
The Rosh Hashanah Anthology by Philip Goodman
A Feast of History: The Drama of Passover through the Ages by Chaim Raphael
Jewish Family & Life traditions, holidays, and values for today's parents and children by Yosef I. Abramowitz
The Second Jewish Catalog: Sources & Resources by Sharon Strassfeld
A Treasury of Jewish Humor: A Classic Collection of Humorous Stories, Satires and Witticism from the Rich Jewish Literature of All Times by Nathan Ausubel
Gates of Mitzvah: A Guide to the Jewish Life Cycle by Simeon J. Maslin
A Treasury of Jewish Literature from Biblical Times to Today by Gloria Goldreich
The Jews in Their Land by David Ben-Gurion
Ecology & the Jewish Spirit: Where Nature & the Sacred Meet by Ellen Bernstein
The Junior Jewish Encyclopedia by Naomi Ben-Asher
Fewer