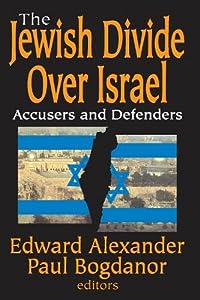 The Jewish Divide Over Israel: Accusers and Defenders

Before 1967, Israel had the overwhelming support of world opinion. So long as Israel's existence was in harmony with politically correct assumptions, it was supported, or at least accepted, by the majority of "progressive" Jews, especially in the wake of the Holocaust. This is no longer the case. The Jewish Divide Over Israel explains the role played by prominent Jews in turning Israel into an isolated pariah nation.After their catastrophic defeat in 1967, Arabs overcame inferiority on the battlefield with superiority in the war of ideas. Their propaganda stopped trumpeting their desire to eradicate Israel. Instead, in a calculated appeal to liberals and radicals, they redefined their war of aggression against the Jews as a struggle for the liberation of Palestinian Arabs. The tenacity of Arabs' rejection of Israel and their relentless campaign--in schools, universities, churches, professional organizations, and, above all, the news media--to destroy Israel's moral image had the desired impact. Many Jewish liberals became desperate to escape from the shadow of Israel's alleged misdeeds and found a way to do so by joining other members of the left in blaming Israeli sins for Arab violence. Today, Jewish liberals rationalize violence against the innocent as resistance to the oppressor, excuse Arab extremism as the frustration of a wronged party, and redefine eliminationist rhetoric and physical assaults on Jews as "criticism of Israeli policy." Israel's Jewish accusers have played a crucial and disproportionate role in the current upsurge of antisemitism precisely because they speak as Jews.The essays in this book seek to understand and throw back the assault on Israel led by such Jewish liberals and radicals as Tony Judt, Noam Chomsky, George Steiner, Daniel Boyarin, Marc Ellis, Israel Shahak, and many others. Its writers demonstrate that the foundation of the state of Israel, far from being the primal sin alleged by its accusers, was one of the few redeeming events in a century of blood and shame.… (more)

What Israel Means to Me by Alan M. Dershowitz
A History of Israel: From the Rise of Zionism to Our Time by Howard Morley Sachar
Jews and Power by Ruth R. Wisse
Standing with Israel by David Brog
Negotiating Arab-Israeli Peace: American Leadership in the Middle East by Daniel Kurtzer
8 more
Future Tense: Jews, Judaism, and Israel in the Twenty-First Century by Jonathan Sacks
The Case for Israel by Alan M. Dershowitz
The Atlas of Jewish History by Martin Gilbert
The Seventh Million: The Israelis and the Holocaust by Tom Segev
The Sacred Chain: A History of the Jews by Norman F. Cantor
The End of the Holocaust by Alvin H. Rosenfeld
Herzl by Amos Elon
The Family: A journey into the Heart of the Twentieth Century by David Laskin
Fewer