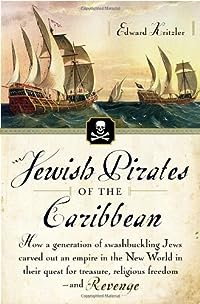 Jewish Pirates of the Caribbean: How a Generation of Swashbuckling Jews Carved Out an Empire in the New World in Their Quest for Treasure, Religious Freedom -- and Revenge

At the end of the fifteenth century, the Spanish Inquisition forced Jews to flee the country. The most adventurous among them took to the high seas as freewheeling outlaws. attacking and plundering the Spanish fleet while forming alliances with other European powers to ensure the safety of Jews living in hiding. This book is the entertaining saga of a hidden chapter in Jewish history and of the cruelty, terror, and greed that flourished during the Age of Discovery. Readers will meet such daring figures as the pirate rabbi Samuel Palache, who founded Holland's Jewish community; Abraham Cohen Henriques, an arms dealer who used his cunning and economic muscle to find safe havens for other Jews; and his pirate brother Moses, credited with the capture of the Spanish silver fleet in 1628--the largest heist in pirate history. Historian Kritzler here captures a gritty and glorious era of history from an eye-opening perspective.--From publisher description.… (more)

LibraryThing member ZoharLaor
This book is about a small part in the vast history of the Jewish people. This is an incredible book with many fascinating characters their intrigue, exploration and adventure. The author focuses on the Jewish pirates as well as the legitimate Jewish seamen (such as pilots, navigators, etc.) since,
Show More
let's face it, there is a reason you never heard of Jewish pirates - there weren't that many.
Actually, "legitimate" might not be a good word since at that time many pirates were state sponsored (they were called "privateers").

The storyline follows the Sephardic Jews (those expelled from Spain and Portugal during the Inquisition) who tried to find a place in the New World and spans several centuries. Of course, once they settled in a place where no one wanted to settle, made it flourish and succeeded beyond anyone's wildest dreams the Kings of Christendom sent out the Inquisition under the guise of "holier than thou" to convert the heretics (in the process confiscating and splitting their businesses and possessions 50/50 with the Crown) and let the Diaspora cycle start over.

One of the most fascinating characters in the book is Samuel Palache, the "pirate rabbi," who grew up in the mid-1500s in Morocco and was a formative Jewish leader, a rabbi, an advisor to the Sultan, a diplomat and, of course, a pirate. The book is sprinkled with details about Jewish life (Palache had a kosher chef on his pirate ship) from both the Old and New Worlds especially in Jamaica (the author's home) and Amsterdam.

My problem with the book is that it offers very authoritative historical statements, without any proof. For example the part where the author tells us about "King Solomon's trading post", which is only a theory since that there is no proof that Jews lived in Spain (Sephard) during the reign of King Solomon; or that Columbus' had a hidden agenda which was to find the Sephardim Jews a place to live free from the terror of the Inquisition - again - no proof of that whatsoever except that the Colón (Columbus) family allowed Jews to live at the island they owned and did not allow the Inquisition to set a foothold at said place.

Another issue I had is the editing. Some words are italicized, other words which fall in the same category (such as foreign words) are not and the same is true with capitalization. Maybe it's just me because English is my second language and those things simply stick out at me like a sore thumb.

Nevertheless, this is an enjoyable book and I learned a lot about a fascinating chapter in the Jewish history. Just beware that you'll be getting a book about tangled and colorful adventures of the high seas but not a solid history book.
Show Less
5 more
LibraryThing member pineapplejuggler
Easy to read and makes a surprisingly awesome story.
LibraryThing member gmmoney
Overall, I enjoyed this book. I was a little mired in the end notes and all the characters, but I learned a lot about this period of history, which is often glossed over in history courses, despite our undying fascination with Columbus and the age of exploration.This is really the story about how
Show More
the Jews, driven from country to country in Europe, seize the opportunity to explore the new world in the hopes of finding a safe refuge where they can live and work without the constant fear of the Inquisition. Well-researched and interesting, it's a good read if you want to learn more about the colonial era and like all that European political intrigue.
Show Less
LibraryThing member anyanwubutler
If this history had been a more careful, better sourced history, I think I’d have liked it better. If it were historical fiction concentrating on two or three Jewish pirates, instead of talking about people across nationalities, cultures and politics (both religious and national) I’d have liked
Show More
it better. As it is, it’s a better concept than it is a book. When I was Sunday School, or possibly Hebrew School, as a student many, many years ago, a teacher said that Columbus may have been Jewish but certainly sailed with Jewish sailors. This information has been around a long time. The Age of Exploration is also genocide, several times over: of Indians, of Jews because it coincided with the Inquisition, and of Africans taken from their homes as slaves. According to this book, the Triangle Trade was funded by, sailed by and profited by Jews. I’m done here.
Show Less
LibraryThing member HandelmanLibraryTINR
Edward Kritzler tells the tale of an unlikely group of swashbuckling Jews who ransacked the high seas in the aftermath of the Spanish Inquisition. At the end of the fifteenth century, many Jews had to flee Spain and Portugal. The most adventurous among them took to the seas as freewheeling outlaws.
Show More

They attacked and plundered the Spanish fleet while forming alliances with other European powers to ensure the safety of Jews living in hiding.
Show Less
LibraryThing member CBJames
uick route to the West Indies, Spain expelled the Jews. Some 300,000 people were affected. Jewish communities who had lived in Spain for generations faced three choices: convert to Christianity, leave the country or face the inquisition.

Eward Kritzler's new book,
Show More
Jewish Pirates of the Caribbean: How a generation of swashbuckling Jews carved out an empire in the New World in their quest for treasure, religious freedom and Revenge, looks at the Jews forced into hiding by their expulsion from Spain who became essential to the exploration and development of the New World and at how many of them became successful pirates during the golden age of Caribbean piracy.

Here's the story of one, Samuel Palache, the pirate rabbi.

Samuel Palache grew up in Morocco where many Jews who fled the Spanish Inquisition years before his birth found safety inside a walled ghetto protected by the sultan who needed their financial expertise. Some 50,000 Jews led successful lives inside the ghetto of Fez, but they were not allowed freedom of movement outside the ghetto's walls. Coming from a family of rabbis, Samuel Palache began his rabbinical training at a young age studying both the Torah and the Talmud and becoming fluent in many languages including Arabic, Spanish, Portuguese, Hebrew and Chaldean. When he reached adulthood, Palache became a merchant pirate, free to leave the ghetto in the service of the sultan.

He later tried to settle in Spain working for King Phillip II, but the inquisition forced him to flee to Amsterdam where the ideals of religious freedom produced an uneasy refuge for many of Spain's exiled Jews. There Palache became the rabbi for a small community of 50 or so Jewish merchant families. Through the remainder of his life he continued to lead pirate attacks on the Spanish coast in the service of the sultan of Morocco and to serve as a rabbi in his Amsterdam home. When he died in 1616, six mounted horses draped in black pulled the hearse. Prince Maurice and the local city magistrates marched behind it followed by the entire Jewish community which then numbered just over 1,200 people.

There are many such accounts in Jewish Pirates of the Caribbean which makes for fascinating reading. What there is not is an overarching thesis bringing the entire book together for a particular purpose. While I found Jewish Pirates of the Caribbean interesting and enlightening, I wanted it all to come to a point and for Mr. Kritzler to come to conclusions. Mr. Kritzler is interested in resurrecting largely forgotten Jewish contributions to the exploration and settlement of the New World. The Jewish navigators who sailed with Juan Cabral, the businessmen who brought the sugar industry to Jamaica along with the pirates who caused so much grief for the Kings of Spain have not been a part of any history book I've ever read before. For this, I give Mr. Kritzler full credit. And for this, Jewish Pirates of the Caribbean is an excellent book.
Show Less
Fewer

Encyclopedia of Jewish Humor: From Biblical Times to the Modern Age by Henry D. Spalding
Great Jews in Sports by Robert Slater
The New Jewish Wedding by Anita Diamant
The Mezuzah in the Madonna's Foot: Oral Histories Exploring 500 Years in the Paradoxical Relationship of Spain and the Jews by Trudi Alexy
Jew vs. Jew: The Struggle for the Soul of American Jewry by Samuel G. Freedman
20 more
The Second Jewish Book of Why by Alfred J. Kolatch
The Big Book of Jewish Humor by William Novak
How We Lived: A Documentary History of Immigrant Jews in American, 1880-1930 by Irving Howe
Born to Kvetch: Yiddish Language and Culture in All Its Moods by Michael Wex
The Jewish Book of Why by Alfred J. Kolatch
Deborah, Golda, and Me: Being Female and Jewish in America by Letty Cottin Pogrebin
The Jews in America: The Roots, History, and Destiny of American Jews by Max I. Dimont
Life Is With People: The Culture of the Shtetl by Mark Zborowski
The Jewish Spirit: A Celebration in Stories & Art by Ellen Frankel
The Abandonment of the Jews: America and the Holocaust, 1941-1945 by David S. Wyman
World of Our Fathers: The Journey of the East European Jews to America and the Life They Found and Made by Irving Howe
Tough Jews: Fathers, Sons, and Gangster Dreams by Rich Cohen
The Jews in America by David Cohen
I am Jewish: Personal Reflections Inspired by the Last Words of Daniel Pearl by Judea Pearl
Great Jewish Women by Elinor Slater
The Vanishing American Jew: In Search of Jewish Identity for the Next Century by Alan M. Dershowitz
Yiddish Folktales by Beatrice Weinreich
The Jews: A Treasury of Art and Literature by Sharon R. Keller
The Service of the Heart: A Guide to the Jewish Prayer Book by Evelyn Garfiel
"The Rest of Us": The Rise of America's Eastern European Jews by Stephen Birmingham
Fewer