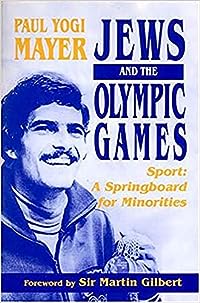 Jews and the Olympic Games sport : a springboard for minorities

In the last century young Jews, particularly in Central Europe, found that they had the new and exhilarating opportunity to give expression to their physical talents and energy. How they and their successors grasped it is the theme of this engaging book, the fruits of the author's lifelong research and enthusiasm. Even after the Holocaust, Jews were among the outstanding Olympians, and over 400 Jewish medallists from the first modern Games in Athens in 1896 to the Sydney Millennium Games. However, this is not merely a book of record and records, names and events. Yogi Mayer has drawn on his own memories as an athlete, coach, educator and sports journalist to create a compelling, illustrated eyewitness account. He has known many of the athletes who are featured in the book and he describes their personalities, virtues, weaknesses and, in some cases, tragic fates.… (more)