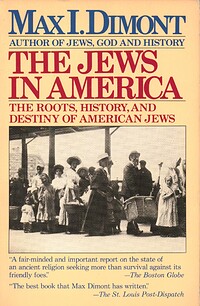 The Jews in America: The Roots, History, and Destiny of American Jews

"A wondrous tale of American Judaism" from the Colonial Era to the twentiethcentury, by the acclaimed author of Jews, God, and History (Kirkus Reviews). Beginning with the Sephardim who first reached the shores of America in the 1600s, this fascinating book by historian Max Dimont traces the journey of the Jews in the United States. It follows the various waves of immigration that brought people and families from Germany, Russia, and beyond; recounts the cultural achievements of those who escaped oppression in their native lands; and discusses the movement away from Orthodoxy and the attitudes of American Jews--both religious and secular--toward Israel.   From the author of Jews, God, and History, which has sold more than one million copies and was called "unquestionably the best popular history of the Jews written in the English language" by the LosAngeles Times, this is a compelling account by an author who was himself an immigrant, raised in Helsinki, Finland, before arriving at Ellis Island in 1929 and going on to serve in army intelligence in World War II.… (more)

Jew vs. Jew: The Struggle for the Soul of American Jewry by Samuel G. Freedman
How We Lived: A Documentary History of Immigrant Jews in American, 1880-1930 by Irving Howe
A Certain People: American Jews and Their Lives Today by Charles E. Silberman
Deborah, Golda, and Me: Being Female and Jewish in America by Letty Cottin Pogrebin
Where Are We? The Inner Life of America's Jews by Leonard J. Fein
16 more
The Rosh Hashanah Anthology by Philip Goodman
World of Our Fathers: The Journey of the East European Jews to America and the Life They Found and Made by Irving Howe
The Jews in America by David Cohen
The Jews in America: Four Centuries of an Uneasy Encounter by Arthur Hertzberg
Sabbath: The Day of Delight by Abraham Ezra Millgram
American Judaism by Nathan Glazer
Great Jews in Sports by Robert Slater
The Purim Anthology by Philip Goodman
Leo Rosten's Treasury of Jewish Quotations by Leo Calvin Rosten
The Vanishing American Jew: In Search of Jewish Identity for the Next Century by Alan M. Dershowitz
Jewish and Female: Choices and Changes in Our Lives Today by Susan Weidman Schneider
The American Jewish Album: 1654 to the Present by Allon Schoener
Gates of Mitzvah: A Guide to the Jewish Life Cycle by Simeon J. Maslin
The Sukkot/Simhat Torah Anthology by Philip Goodman
From Generation to Generation: How to Trace Your Jewish Genealogy and Personal History by Arthur Kurzweil
"The Rest of Us": The Rise of America's Eastern European Jews by Stephen Birmingham
Fewer