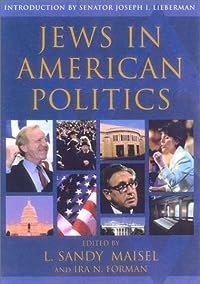 Joseph Lieberman's Vice Presidential nomination and Presidential candidacy are neither the first nor last words on signal Jewish achievements in American politics. Jews have played an important role in American government since the early 1800s at least, and in view of the 2004 election, there is no political office outside the reach of Jewish American citizens. For the first time, Jews in American Politics: Essays brings together a complete picture of the past, present, and future of Jewish political participation. Perfect for students and scholars alike, this monumental work includes thoughtful and original chapters by leading journalists, scholars, and practitioners. Topics range from Jewish leadership and identity; to Jews in Congress, on the Supreme Court, and in presidential administrations; and on to Jewish influence in the media, the lobbies, and in other arenas in which American government operates powerfully, if informally. In addition to the thematically unified essays, Jews in American Politics: Essays concludes with an invaluable roster of Jews in key governmental positions from Ambassadorships and Cabinet posts to federal judges, state governors, and mayors of major cities. Both analytical and anecdotal, the essays in Jews in American Politics offer deep insight into serious questions about the dilemmas that Jews in public service face, as well as humorous sidelights and authoritative reference materials never before collected in one source. The story of the rich tradition of Jewish participation in American political life provides an indispensable resource for any serious follower of American politics, especially in election year 2004.… (more)

Profiles in American Judaism: The Reform, Conservative, Orthodox, and Reconstructionist Traditions in Historical Perspective by Marc Lee Raphael
The Jewish Way: Living the Holidays by Irving Greenberg
Jews Among the Indians: Tales of Adventure and Conflict in the Old West by Mel Marks
The Vanishing American Jew: In Search of Jewish Identity for the Next Century by Alan M. Dershowitz
The Jews in America: The Roots, History, and Destiny of American Jews by Max I. Dimont
13 more
The Jews in America: A Picture Album by Milton Meltzer
I Seek My Brethren: Rescue, Relief and Reconstruction -- The Work of the American Jewish Joint Distribution Committee Ralph Goldman and "The Joint" by Tom Shachtman
The Young Reader's Encyclopedia of Jewish History by Ilanah Shamir
Not So Random Thoughts by Mordecai Menahem Kaplan
Judaism as a Civilization: Toward a Reconstruction of American Jewish Life by Mordecai Menahem Kaplan
The Jews in America: Four Centuries of an Uneasy Encounter by Arthur Hertzberg
Mixed Blessings marriage between Jews and Christians by Paul Cowan
The Grandees: America's Sephardic Elite by Stephen Birmingham
Jew vs. Jew: The Struggle for the Soul of American Jewry by Samuel G. Freedman
Where Are We? The Inner Life of America's Jews by Leonard J. Fein
Great Jews in Sports by Robert Slater
Shores of Refuge: A Hundred Years of Jewish Emigration by Ronald Sanders
World of Our Fathers: The Journey of the East European Jews to America and the Life They Found and Made by Irving Howe
Fewer