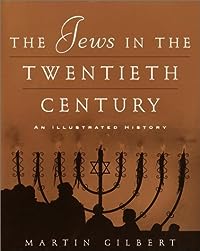 The Jews in the Twentieth Century: An Illustrated History

"What an extraordinarly chroncile of upheaval, sorrow, and achievement is the story of the Jews in the twentieth century - and who better to narrate it than the renowned British historian Sir Martin Gilbert, whose lifework has been the study of the events and personages of our time. In this illustrated volume he describes the individuals, the historic movements, the watershed moments, and the horrific years that so profoundly changed the world and the Jewish people." "In a text interwoven with and illuminated by more than 400 photographs, many of them never before published or long forgotten, we meet the widely dispersed turn-of-the-century Jewish communities of Europe, the Middle East, and Asia. Then we encounter with startling immediacy, the impassioned Zionists who set out to reclaim Palestine and the immigrant waves that poured out of Eastern Europe in search of a better life in America - among them, the brilliantly creative writers, composers, actors, and comedians who enthralled millions; and the scientists, judges, legislators, entrepreneurs, and intellectuals whose numbers can hardly be counted but whose thoughts and deeds shaped the modern world."--BOOK JACKET.… (more)

The Jews in Their Land by David Ben-Gurion
Growing up Jewish: An Anthology by Jay David
Great Jews in Sports by Robert Slater
The Mezuzah in the Madonna's Foot: Oral Histories Exploring 500 Years in the Paradoxical Relationship of Spain and the Jews by Trudi Alexy
The Precious Legacy: Judaic Treasures from the Czechoslovak State Collection by David A. Altshuler
26 more
Deborah, Golda, and Me: Being Female and Jewish in America by Letty Cottin Pogrebin
The Sacred Chain: A History of the Jews by Norman F. Cantor
Jewish Art and Civilization by Geoffrey Wigoder
I am Jewish: Personal Reflections Inspired by the Last Words of Daniel Pearl by Judea Pearl
Life Is With People: The Culture of the Shtetl by Mark Zborowski
A Certain People: American Jews and Their Lives Today by Charles E. Silberman
I Seek My Brethren: Rescue, Relief and Reconstruction -- The Work of the American Jewish Joint Distribution Committee Ralph Goldman and "The Joint" by Tom Shachtman
To Raise a Jewish Child: A Guide for Parents by Hayim Donin
The Illustrated History of the Jewish People by N. R. M. De Lange
The Sukkot/Simhat Torah Anthology by Philip Goodman
Heritage: Civilization and the Jews by Abba Solomon Eban
A History of Jewish Civilization by Lavinia Cohn-Sherbok
A Jew Today by Elie Wiesel
Response to Modernity: A History of the Reform Movement in Judaism by Michael A. Meyer
Great Jewish Women by Elinor Slater
Abba Eban: An Autobiography by Abba Solomon Eban
A Vanished World by Roman Vishniac
The Illustrated Atlas of Jewish Civilization by Josephine Bacon
Memoirs: All Rivers Run to the Sea by Elie Wiesel
Great Jewish Thinkers of the Twentieth Century Edited with introductory essays by Simon Noveck
Jewish Renewal: A Path to Healing and Transformation by Michael Lerner
The Jews: A Treasury of Art and Literature by Sharon R. Keller
The Jewish World: History and Culture of the Jewish People by Elie Kedourie
In the land of Israel by Amos Oz
Teaching Your Children About God: A Modern Jewish Approach by David J. Wolpe
Jew vs. Jew: The Struggle for the Soul of American Jewry by Samuel G. Freedman
Fewer