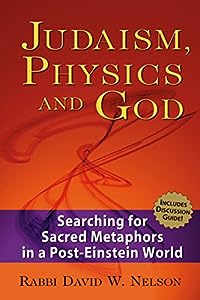 Judaism, Physics and God: Searching for Sacred Metaphors in a Post-Einstein World

Hear the Voices of Ancient Wisdom in the Modern Language of Science "Ancient traditions, whose only claim to authenticity is that they are old, run the risk of becoming old-fashioned. But if an ancient tradition can claim to be not only ancient but also timeless and contemporary, it has a far greater chance of convincing each new, young generation of its value. Such a claim requires that each generation's retelling use the new metaphors of the new generation." --from Chapter 1 In our era, we often feel that we can either speak about God or think scientifically about the world, but never both at the same time. But what if we reconciled the two? How could the basic scientific truths of how the natural world came to be shape our understanding of our own spiritual search for meaning? In this provocative fusion of religion and science, Rabbi David Nelson examines the great theories of modern physics to find new ways for contemporary people to express their spiritual beliefs and thoughts. Nelson explores cosmology, quantum mechanics, chaos theory, relativity and string theory in clear, non-technical terms and recasts the traditional views of our ancestors in language that can be understood in a world in which space flight, atom-smashing and black holes are common features of our metaphorical landscape. Judaism, Physics and God reframes Judaism so that it is in harmony with the conquests of modern scientific thinking, and introduces fascinating new ways to understand your relationship with God in context of some of the most exciting scientific ideas of the contemporary world.… (more)

Future Tense: Jews, Judaism, and Israel in the Twenty-First Century by Jonathan Sacks
God & the Big Bang: Discovering Harmony Between Science & Spirituality by Matt Daniel C.,
Finding God: Ten Jewish Responses ten Jewish responses by Rifat Sonsino
Gates of Mitzvah: A Guide to the Jewish Life Cycle by Simeon J. Maslin
Jewish Days: A Book of Jewish Life and Culture Around the Year by Francine Klagsbrun
14 more
Living Judaism: The Complete Guide to Jewish Belief, Tradition, and Practice by Wayne D. Dosick
Twelve Jewish Steps to Recovery: A Personal Guide to Turning from Alcoholism and Other Addictions by Kerry M. Olitzky
Jewish and Female: Choices and Changes in Our Lives Today by Susan Weidman Schneider
The Thirteen Petalled Rose by Adin Steinsaltz
Teaching Your Children About God: A Modern Jewish Approach by David J. Wolpe
Stars of David: Prominent Jews Talk About Being Jewish by Abigail Pogrebin
Putting God on the Guest List: How to Reclaim the Spiritual Meaning of Your Child's Bar or Bat Mitzvah by Jeffrey K. Salkin
Parenting Jewish Teens: A Guide for the Perplexed by Joanne Doades
Raising a Child with Soul: How Time-Tested Jewish Wisdom Can Shape Your Child's Character by Slovie Jungreis-Wolff
Living a Jewish Life: Jewish Traditions, Customs, and Values for Today's Families by Anita Diamant
The Five Books of Miriam: A Woman's Commentary on the Torah by Ellen Frankel
Choosing a Jewish Life: A Handbook for People Converting to Judaism and for Their Family and Friends by Anita Diamant
The Third Jewish Catalog: Creating Community by Sharon Strassfeld
The New Rabbi: A Congregation Searches For Its Leader by Stephen Fried
Fewer