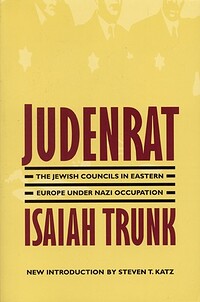 Judenrat: The Jewish Councils in Eastern Europe Under Nazi Occupation

During World War II, more than five million Jews lived under Nazi rule in Eastern Europe. In occupied Poland, the Baltic countries, Byelorussia, and Ukraine, they were stripped of property and "resettled" in ghettos. The German authorities established in each ghetto a Jewish Council, or Judenrat, to maintain minimal living standards. The Judenrat was required to carry out Nazi directives against other Jews, to supply forced labor, and eventually to cooperate in the Final Solution. Did the Jewish leaders of the ghettos, who were also victims, assist their murderers? If cooperation with the Nazi oppressors was morally defensible during the first stage in organizing the ghettos, what about later, when deportations to death camps began? Trunk analyzes situations where the Councils and ghetto police were forced to send their own communities to death. Some Council members chose suicide rather than supply lists to the Nazis; others used delaying tactics. Some handed over the lists. Some joined their families in the gas chamber. In assessing guilt and innocence, Trunk never allows the reader to forget that the impossible choices facing the Jewish leaders were created by the Nazis.… (more)