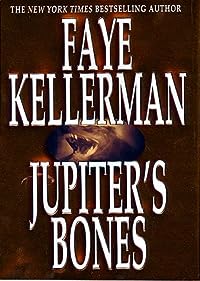 Once Dr. Emil Euler Ganz was a preeminent astrophysicist with a world-renowned reputation. But then he vanished without any warning to his family or colleagues. Fifteen years later, he reappeared as "Father Jupiter", the founder and charismatic leader of the scientific cult, The Order of the Rings. And now he's dead--a vial of sleeping pills and an empty bottle of vodka standing near his lifeless body. Was Ganz's death an accident? Suicide? Or did someone hasten Jupiter prematurely out of this world? These are the questions LAPD Lieutenant Peter Decker and his Homicide team are determined to answer as they enter the cult's fortresslike compound. But the dead leader's four "privileged" attendants make it clear that the police are not welcome there--and the mysterious disappearance of two of the Order's members, including a child, turns an already uncomfortable situation even uglier and more incendiary. Decker will need more than the wisdom and support of his wife, Rina Lazarus, to defuse a ticking time bomb of jealousy, greed, bizarre hidden pasts, and deadly secrets--one that could explode at any time into mayhem so pernicious that it threatens to destroy a multitude of misguided lives--and scores of helpless, innocent children as well.… (more)

LibraryThing member mazda502001
Once again a great read from Kellerman. Love this series.

Back Cover Blurb:
Dr Emil Ganz was always extraordinary, in death as well as in life. A physicist whose theories of Cosmology thrilled the world, he disappeared at the peak of his fame, to emerge years later as Jupiter, leader of a community
Show More
that preached a bizarre blend of mathematics and mysticism, drawing the credulous, the unhappy and the utterly unscrupulous into their enclosed ranks.
And now Ganz's apparent suicide is threatening to destabilise this potentially explosive cult. As the battle to succeed Ganz commences, Lieutenant Peter Decker, working to uncover the scientist's precise fate, begins to fear that his death may simply be the start - and that innocents, the community's children amongst them, could be the first victims, as Jupiter's followers descend into their hellish vision of death and madness.....
Show Less
5 more
LibraryThing member JoanieS
Faye Kellerman never disappoints. Although it started out a little slowly, once it picked up speed it kept accelerating. I love reading about Peter and Rina's relationship and family life.It provides a respite from the intense issues she explores in her books. I have been reading her books in
Show More
order, this is why I have just read this ten year old book. However, her books are still relevant.
Show Less
LibraryThing member memasmb
I am currently reading through the whole series of Peter Decker and Rina Lazarus novels by Faye Kellerman.
This book brings back the awful memories of Waco and the reminder that these cults still thrive.

Enjoyed reading her handling of the Peter's stepsons teenage growing pains and how they continue
Show More
to bond with their stepfather. Good balance to the horrid story line of the Order.

Another book to enjoy from a great author.
Show Less
LibraryThing member tmbcoughlin
This was a somewhat refreshing change for the Peter Decker series. Basically, the death of a religous somewhat cult leader occurs and is not reported properly hence an investigation. In keeping with the someone in the picture did it, you just have to find out who, it seems there must have been an
Show More
attempt to gain power to lead the cult. There are enough turns in the story to keep you interested but not so much to keep you up all hours reading it. The ending is a little surprising, but there are enough predictable outcomes just the same. If you like this series, this is an enjoyable book.
Show Less
LibraryThing member AnnieMod
25 years ago Dr. Emil Euler Ganz disappeared. He used to be one of the best cosmologists in the world before his ideas got a bit crazy and by the time he disappeared, he was almost considered a washout and a hack. He resurfaced 10 years later, with no explanation of where he had been. But he never
Show More
got back to science, instead he called himself Father Jupiter and started a cult.

The story opens when his daughter gets a call Ganz/Jupiter is dead in the cult's compound and the cult does not plan to call the police - and whoever called Europa Ganz thinks that she should. So she calls and Peter is assigned to the case - after all Emil Ganz is a celebrity, in both of his lives.

It looks like a suicide and everyone seems to like the idea. But then things get out of hand - a woman disappears from the compound, then a child is discovered to be missing and while investigating the missing people, Marge and Oliver stumble upon yet another dead body. And then things get really complicated when one of the remaining leaders of the cult start shooting at the police and closes the compound down, with all 200+ members inside, including children, and a lot of firepower. Everyone's nightmares are playing in real life again - the comparisons with Waco are writing themselves and Kellerman is not shying from them.

Meanwhile, back in Peter and Rina's household, things are a bit tense - the shadows of 8 years ago, the days when the two of them met and fell in love, catch up with the family - while we know what happened with Rina, the boys did not escape unscathed either - and it was about time for them to act out enough to finally pull that story back in the light.

Peter Decker is not a perfect man - he is short tempered and he does make mistakes. That's part of his charm. His handling of both the case of the cult and of the repercussions of what his sons reveal show that his heart is in what he does - even when he is unsure of what he can do or when he realizes the mistakes he had done. I missed Rina a bit in this book - she is there in the house, keeping everything going (including the extremely spoiled Hannah, now 5 years old) but she is not part of the crime investigation (and she is kept in the dark about the family drama).

It is a dark novel (and people can be idiots). If you are claustrophobic, some parts of the novel may be a bit of a problem. The "crazy cult leader" gets a bit of a spin here although it falls back to where it expect it to fall which is to be expected but still. A lot of people die and there are heart breaking moments but there are also survivors. By the end of the novel, Peter manages to solve even the problem he was never asked to - he figures out where Ganz had been for the 10 years he was missing.

We even get to see Alex Delaware from the other Kellerman series - well, hear about him anyway. He is not called by name but if you are reading both series, you will recognize his professional description when you read it.

It is not my favorite novel from the series but it is a solid novel albeit a bit cliched. I do wonder how much of the cliches are there because of all the true crime series we had been bombarded with in the last decade - this novel is from 1999 after all.
Show Less
LibraryThing member -Eva-
The founder and leader of a scientific cult is found dead and Decker is tasked with figuring out if it was a suicide or if the cult is hiding something much more malevolent. As usual in this series, the family parts are quite interesting and the characters very engaging. Unfortunately, this
Show More
installment has taken the turn from mystery and police procedure and tries to become an action thriller and it's really not in Kellerman's scope as a writer. The action sequence at the end is so overblown that it brings to mind something like Mission Impossible, but with an unlikely cast and some details that are completely impossible since we're dealing with the LAPD and not a Hollywood production company. Only recommended to readers who already follow the series, but don't bother otherwise.
Show Less
Fewer