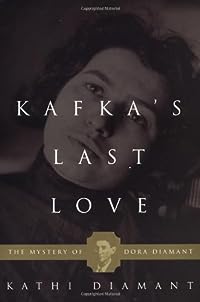 A gripping literary detective story. Kathi Diamant brings to light the amazing woman who captured Kafka's heart and kept his literary flame alive for decades. It was Dora Diamant, an independent spirit who fled her Polish Hasidic family to pursue her Zionist dreams, who persuaded Kafka to leave his parents and live with her in Berlin the year before he died. Although many credit (or blame) her for burning many of his papers, as he had requested, she also held on to many others - papers that the Gestapo confiscated and that have yet to be recovered. Dora's life after Kafka - from her days as a stuggling agitprop actress in Berlin to her sojurn in Moscow in the 1930s, from her wartime escape to Great Britain, to her first emotional visit to the new nation of Israel - offers a prism through which we can view the cultural and political history of twentieth-century Europe. Based on original sources and interviews, including never-before-seen material from the Comintern and Gestapo archives and Dora's newly-discovered notebook, diary and letters, Kafka's Last Love illuminates the life of a literary 'wife' who, like Vera Nabokov and Nora Joyce, is a remarkable woman in her own right.… (more)