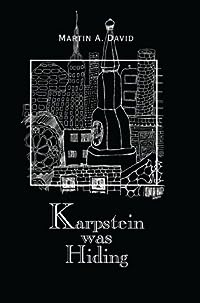 by Martin A. David

Dreams, visions and expressionist views of reality all dance through Theodore Karpstein's hidden world. Are the streetwalker and the newly released former convict who befriend him, or the watchman who tries to save him, any less real than the long-dead family members who visit him? Karpstein lives in the rooms of his own mind. The walls are flexible and the boundaries between the living and the dead; the present and the past are ephemeral. In the past there was the holocaust. Karpstein survived it even though he was not there. The guilt of his survival haunts him. In the present there is a warehouse crowded with living memories. Can Karpstein survive that?