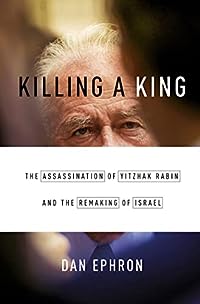 Killing a King: The Assassination of Yitzhak Rabin and the Remaking of Israel

The assassination of Israeli Prime Minister Yitzhak Rabin remains the single most consequential event in Israel's recent history, and one that fundamentally altered the trajectory for both Israel and the Palestinians. Killing a King relates the parallel stories of Rabin and his stalker, Yigal Amir, over the two years leading up to the assassination, as one of them planned political deals he hoped would lead to peace, and the other plotted murder.Dan Ephron, who reported from the Middle East for much of the past two decades, covered both the rally where Rabin was killed and the subsequent murder trial. He describes how Rabin, a former general who led the army in the Six-Day War of 1967, embraced his nemesis, Palestine Liberation Organization leader Yasser Arafat, and set about trying to resolve the twentieth century's most vexing conflict. He recounts in agonizing detail how extremists on both sides undermined the peace process with ghastly violence. And he reconstructs the relentless scheming of Amir, a twenty-five-year-old law student and Jewish extremist who believed that Rabin's peace effort amounted to a betrayal of Israel and the Jewish people. As Amir stalked Rabin over many months, the agency charged with safeguarding the Israeli leader missed key clues, overlooked intelligence reports, and then failed to protect him at the critical moment, exactly twenty years ago. It was the biggest security blunder in the agency's history.Through the prism of the assassination, much about Israel today comes into focus, from the paralysis in peacemaking to the fraught relationship between current Prime Minister Benjamin Netanyahu and President Barack Obama. Based on Israeli police reports, interviews, confessions, and the cooperation of both Rabin's and Amir's families, Killing a King is a tightly coiled narrative that reaches an inevitable, shattering conclusion. One can't help but wonder what Israel would look like today had Rabin lived.… (more)

LibraryThing member rivkat
The story of the assassination of Yitzak Rabin and the political culture surrounding it. Rabin’s death took a moment of real opportunity and destroyed it, which was exactly what his assassin wanted to do. Ephron looks at the religious nonsense with which the assassin justified his actions—Rabin
Show More
supposedly posed an existential threat to the Jewish people, making his killing an act of self-defense. It’s a hard book to read, because while peace was by no means guaranteed, it was closer than it has been since.
Show Less

My Promised Land: The Triumph and Tragedy of Israel by Ari Shavit
The Prime Ministers: An Intimate Narrative of Israeli Leadership by Yehuda Avner
Lioness: Golda Meir and the Nation of Israel by Francine Klagsbrun
Thirteen Days in September: Carter, Begin, and Sadat at Camp David by Lawrence Wright
Soldier of peace: The Life of Yitzhak Rabin by Dan Kurzman
11 more
In the Name of Sorrow and Hope by Noa Ben Artzi-Pelossof
A Convenient Hatred: The History of Antisemitism by Phyllis Goldstein
Personal Witness: Israel Through My Eyes by Abba Solomon Eban
The Israelis: Founders and Sons by Amos Elon
In the land of Israel by Amos Oz
Like Dreamers: The Story of the Israeli Paratroopers Who Reunited Jerusalem and Divided a Nation by Yossi Klein Halevi
Rise and Kill First: The Secret History of Israel's Targeted Assassinations by Ronen Bergman
Wherever You Go by Joan Leegant
Let There Be Water: Israel's Solution for a Water-Starved World by Seth M. Siegel
Standing with Israel by David Brog
Parenting Jewish Teens: A Guide for the Perplexed by Joanne Doades
Fewer