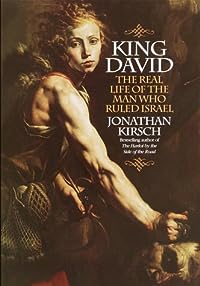 King David: The Real Life of the Man Who Ruled Israel

David, King of the Jews, possessed every flaw and failing a mortal is capable of, yet men and women adored him and God showered him with many more blessings than he did Abraham or Moses. His sexual appetite and prowess were matched only by his violence, both on the battlefield and in the bedroom. A charismatic leader, exalted as "a man after God's own heart," he was also capable of deep cunning, deceit, and betrayal. Now, in King David: The Real Life of the Man Who Ruled Israel, bestselling author Jonathan Kirsch reveals this commanding individual in all his glory and fallibility. In a taut, dramatic narrative, Kirsch brings new depth and psychological complexity to the familiar events of David's life--his slaying of the giant Goliath and his swift challenge to the weak rule of Saul, the first Jewish king; his tragic relationship with Saul's son Jonathan, David's cherished friend (and possibly lover); his celebrated reign in Jerusalem, where his dynasty would hold sway for generations. Yet for all his greatness, David was also a man in thrall to his passions--a voracious lover who secured the favors of his beautiful mistress Bathsheba by secretly arranging the death of her innocent husband; a merciless warrior who triumphed through cruelty; a troubled father who failed to protect his daughter from rape and whose beloved son Absalom rose against him in armed insurrection. Weaving together biblical texts with centuries of interpretation and commentary, Jonathan Kirsch brings King David to life in these pages with extraordinary freshness, intimacy, and vividness of detail. At the center of this inspiring narrative stands a hero of flesh and blood--not the cartoon giant-slayer of sermons and Sunday school stories or the immaculate ruler of legend and art but a magnetic, disturbingly familiar man--a man as vibrant and compelling today as he has been for millennia.… (more)

LibraryThing member banjo123
Kirsch sets up to provide a counter-point to the idea we have of David as an innocent shepherd lad, up against Goliath with a slingshot. The real David was a bloody tribal leader. Or was he? It also turns out that there is no real evidence, outside of the bible, that David existed at all. None of
Show More
the other contemporary writings in the region mention him.
This book is good for a layperson who wants to know more about how the bible was written and overwritten. The different books in the bible give different accounts of David and his life. There are, I think, three different accounts of how David met Saul. Kirsch’s book gives a pretty simplified version of biblical scholarship, but for me, that’s perfect because I don’t have the patience for a lot more.
I ended up deciding that there was a real David, and that Leonard Cohen is the one who got him right in his song, Hallelujah. Not so much because of the secret chord that pleased the lord, though that seems to be true, but because it ends with a “cold and broken hallelujah.”
Show Less
2 more
LibraryThing member JeannetteK
One more exciting shortened, beautified version of King David in our Bible teachings. He was quite the fellow with quite the story. I find the idea of religion and mostly the Bible fascinating, and enjoy it when I hear the real story. I emphasis Story because that is what I feel the Bible is.
LibraryThing member librisissimo
A better subtitle would be "The imaginary life of the man who ruled Israel," since most of the book consists of the author's speculations and fanciful additions to the Biblical text.

The author's desire to prove that David was just a mensch, and the Israelite God & his prophets were frauds, made him
Show More
more interested in pushing his narrative than in either accuracy or consistency.*
The book has a semblance of scholarship, but consists mostly of assertions and contortions.

Kirsch may have thought he was just making current biblical scholarship accessible to the lay public, but without some citation more detailed than "this is an interpolation from a later source" and "this may have been an original folktale" he makes a mishmash of both the scriptures and the literary criticism.

In addition, he appears to be grossly ignorant of anthropological parallels to David's time (for instance, the Welsh Chronicles for tribal infighting) and misstates or ignores any interpretations of history, the scriptural account, character and behavior that either don't agree with his, or present a view other than the straw-man arguments he "demolishes" -- generally with sarcasm rather than proofs.

*cf The prophet Nathan is described on page 167 as "one of those cranky old men," when he presents the "case" of the rich man and the poor man in order to make David self-indict himself for adultery with Bathsheba & murder of her husband, as told in 2 Sam 12.

Kirtsch says that Nathan "suddenly confronted" David, as if they had never met. However, on page 144, David had previously consulted Nathan about building a House for God and was counseled that this was not God's will (2 Sam 7).
Show Less
Fewer

Moses: A Life by Jonathan Kirsch
The Woman Who Laughed at God: The Untold History of the Jewish People by Jonathan Kirsch
Abraham: A Journey to the Heart of Three Faiths by Bruce S. Feiler
I Seek My Brethren: Rescue, Relief and Reconstruction -- The Work of the American Jewish Joint Distribution Committee Ralph Goldman and "The Joint" by Tom Shachtman
To Raise a Jewish Child: A Guide for Parents by Hayim Donin
15 more
The Complete Book of Jewish Observance by Leo Trepp
The Genesis of Justice: Ten Stories of Biblical Inquiries that Led to the Ten Commandments and Modern Law by Alan M. Dershowitz
Joshua and Judges by A. Cohen
Jewish Humor: What the Best Jewish Jokes Say About the Jews by Joseph Telushkin
The Sukkot/Simhat Torah Anthology by Philip Goodman
Jerusalem: One City, Three Faiths by Karen Armstrong
Congregation: Contemporary Writers Read the Jewish Bible by David Rosenberg
Profiles in American Judaism: The Reform, Conservative, Orthodox, and Reconstructionist Traditions in Historical Perspective by Marc Lee Raphael
The Hanukkah Anthology by Philip Goodman
How to Get More Out of Being Jewish even if you are not sure you believe in God, you think going to synagogue is a waste of time, you think keeping kosher is stupid, you hated Hebrew school, or all of the above by Gil Mann
The Rosh Hashanah Anthology by Philip Goodman
Sabbath: The Day of Delight by Abraham Ezra Millgram
Where Are We? The Inner Life of America's Jews by Leonard J. Fein
The Five Books of Miriam: A Woman's Commentary on the Torah by Ellen Frankel
Biblical Literacy: The Most Important People, Events, and Ideas of the Hebrew Bible by Joseph Telushkin
Fewer