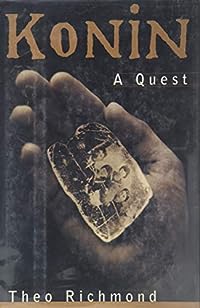 In 1939 the Polish town of Konin vanished in the wake of Nazi occupation. Twenty-five years later, Theo Richmond set out to find what he could about that vanished world. He traveled across the United States, Europe, and Israel, tracing survivors and sifting through archives and the stories of those he interviewed. A project he thought would take six months took seven years. Finally he confronted the Konin of today. Interweaving past and present, Konin tells the story of one community--how it began, how it flourished, and how it ended--and in the process re-creates the precariousness, anguish and necessity of human memory. "A fascinating memorial to a lost community and the people who lived there."--The New York Times Book Review "One reads [it] sometimes with a smile...always on the edge of tears--as if it were the most gripping adventure story."--Elie Wiesel, New York Newsday From the Trade Paperback edition.… (more)

LibraryThing member manyalibrarian
An incredibly emotional journey of a man looking to find his Jewish roots. He travels back to a town whose Jewish population was practically wiped out by the Nazis.

Shtetl: The Life and Death of a Small Town and the World of Polish Jews by Eva Hoffman
Judenrat: The Jewish Councils in Eastern Europe Under Nazi Occupation by Isaiah Trunk
Atlas of the Holocaust by Martin Gilbert
A Hole in the Heart of the World: Being Jewish in Eastern Europe by Jonathan Kaufman
A Vanished World by Roman Vishniac
11 more
The Abandonment of the Jews: America and the Holocaust, 1941-1945 by David S. Wyman
The Golden Tradition: Jewish Life and Thought in Eastern Europe by Lucy S. Dawidowicz
They Fought Back: The Story of Jewish Resistance in Nazi Europe by Yuri Suhl
Children of the Holocaust: Conversations with Sons and Daughters of Survivors by Helen Epstein
While Six Million Died: A Chronicle of American Apathy by Arthur D. Morse
Denying the Holocaust: The Growing Assault on Truth and Memory by Deborah E. Lipstadt
The Holocaust Years: The Nazi Destruction of European Jewry, 1933-1945 by Nora Levin
Life Is With People: The Culture of the Shtetl by Mark Zborowski
The Fugu Plan: The Untold Story of the Japanese and the Jews During World War II by Marvin Tokayer
Out of the Whirlwind: A Reader of Holocaust LIterature a reader of holocaust literature by Albert H. Friedlander
Schindler's Legacy: True Stories of the List Survivors by Elinor J Brecher
Fewer