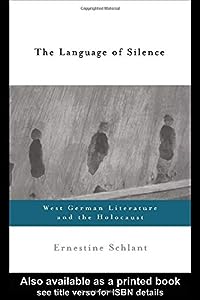 The Language of Silence: West German Literature and the Holocaust

Focusing on individual authors from Heinrich Boll to Gunther Grass, Hermann Lenz to Peter Schneider, The Language of Silence offers an analysis of West German literature as it tries to come to terms with the Holocaust and its impact on postwar West German society. Exploring postwar literature as the barometer of Germany's unconsciously held values as well as of its professed conscience, Ernestine Schlant demonstrates that the confrontation with the Holocaust has shifted over the decades from repression, circumvention, and omission to an open acknowledgement of the crimes. Yet even today a 'language of silence' remains since the victims and their suffering are still overlooked and ignored. Learned and exacting, Schlant's study makes an important contribution to our understanding of postwar German culture.… (more)

The Survivor: An Inspiring True Story by Jack Eisner
Promises Kept by Ernest W. Michel
Hitler's War Against the Jews: A Young Reader's Version of The War Against the Jews, 1933-1945 by David A. Altshuler
A Hole in the Heart of the World: Being Jewish in Eastern Europe by Jonathan Kaufman
None is Too Many: Canada and the Jews of Europe, 1933-1948 by Irving M. Abella
7 more
Love Despite Hate: Child Survivors of the Holocaust and Their Adult Lives by Sarah Moskovitz
Children of the Holocaust: Conversations with Sons and Daughters of Survivors by Helen Epstein
Karski: How One Man Tried to Stop the Holocaust by E. Thomas Wood
The Holocaust Years: The Nazi Destruction of European Jewry, 1933-1945 by Nora Levin
Escape from the Holocaust by Kenneth Roseman
The Holocaust: The Fate of European Jewry, 1932-1945 by Leni Yahil
While Six Million Died: A Chronicle of American Apathy by Arthur D. Morse
Fewer