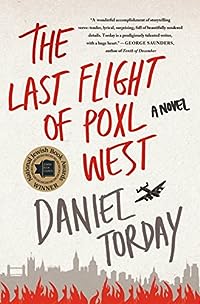 The Last Flight of Poxl West

"All his life, Elijah Goldstein has idolized his charismatic Uncle Poxl. Intensely magnetic, cultured and brilliant, Poxl takes Elijah under his wing, introducing him to opera and art and literature. But when Poxl publishes a memoir of how he was forced to leave his home north of Prague at the start of WWII and then avenged the deaths of his parents by flying RAF bombers over Germany during the war, killing thousands of German citizens, Elijah watches as the carefully constructed world his uncle has created begins to unravel. As Elijah discovers the darker truth of Poxl's past, he comes to understand that the fearless war hero he always revered is in fact a broken and devastated man who suffered unimaginable losses from which he has never recovered. Daniel Torday's debut novel, The Last Flight of Poxl West, beautifully weaves together what it means to be a family in the shadow of war-- to love, to lose, and to heal"--… (more)

New York Times
It’s Mr. Torday’s ability to shift gears between sweeping historical vistas and more intimate family dramas, and between old-school theatrics and more contemporary meditations on the nature of storytelling that announces his emergence as a writer deserving of attention.

LibraryThing member ozzer
In Daniel Torday’s novel, THE LAST FLIGHT OF POXL WEST, both main characters judge and reject loved ones over things that seem fairly unimportant to their overall happiness. Poxl leaves home abruptly after seeing his mother having sex with someone who was not his father. Once again he does the
Show More
same thing to the woman he loves, Francoise, after observing her having sex with a sailor, this despite knowing that she was a prostitute. He lives to regret these rejections but neither can be redeemed. Eli rejects Poxl after he learns that his memoir was embellished by false claims of wartime heroics and thus is never able to reclaim the close childhood relationship he had with his hero and mentor. Torday’s central theme suggests that rash rejections of loved ones are not easily redeemed and can lead to lives that are less full than they could be. The overarching message seems to be that learning how to love and accept other people despite their flaws is essential. Blaming is less important than forgiveness.

Poxl did not pilot a bomber over Germany in WW II as he claimed in his popular memoir about a Jewish war hero who managed to exact some measure of revenge on the Nazi’s for killing his family. It seems clear that Poxyl was not just misremembering his heroic role in the war, but most of his memoir is not about that, but instead tells the story of his two wartime romances: a Dutch prostitute (Francoise) and a British nurse (Glynnis), both of whom he treated poorly and lost.

Another theme of the book involves truth and memory and their roles in storytelling. Clearly, tales of self-dramatization in storytelling can take on an aura of truth, especially if told often enough and when the people involved become famous. However, these fictions have the potential to backfire resulting in a loss of trust and credibility (e.g., the recent embarrassing revelations about the wartime exploits of Brian Williams and Bill O’Reilly). Although Poxyl does not express any regrets about what he did, it did destroy his important relationship with Eli, whose perspectives were revealed in a second narrative viewed as an adult from the present. Eli seems to regret not repairing his relationship with Poxl before he passed away.

Torday’s writing in “The Last Flight of Poxl West” demonstrates considerable skill although the memoir portions seemed to lack detail. Torday needed to show the memoir was a bestseller and well received by the critics to make Poxyl’s fall even more dramatic. However, the narrative that made up the bulk of the book told a rather mundane tale of wartime romance and loss.
Show Less
8 more
LibraryThing member eggsnhm
I wish I were as eloquent as Daniel Torday. I want to be able to say glowing things about this novel in compelling, touching, engaging prose.The most literary novel I've read in years, The Last Flight of Poxl West rises above most fiction. The Last Flight of Poxl West intersperses West's memoir,
Show More
_Skylock_ with the person account of 15-year-old Eli and his relationship with his Uncle Poxl. Both narrators have clear, authentic voices, and both are people I wish I could get to know better. It was truly a delightful read, and I am looking forward to Torday's next novel.
Show Less
LibraryThing member susan0316
This novel was made up of two stories - the first story was the coming of age story of Elijah, the nephew of Poxl West who hero worshipped him in the beginning of the book. It is also the story of Poxl - a Czechoslovakian who fled to Amsterdam and then to London during World War II. He left people
Show More
that he loved behind every time he left one place and fled to another city. As the novel begins, he has written a book about his exploits as an RAF bomber pilot during WWII. The novel is told from both perspectives but for both the old man and the young boy it is the story of learning how to love and accept other people. I thought that the novel was very well written and that it gave a very different side of world war II than other books that I have read about this time period. I would recommend it for book clubs.
Show Less
LibraryThing member Beamis12
A Jewish teenager, Elijah, reveres the older man who is his Uncle Poxl. This man has time for him, takes him to museums, discusses art and literature with him and tells him stories of his life during the war. This is the bare bones of the story but this is a story within a story and telling more
Show More
would ruin this book for future readers.

There is something so tender in the way this is written, the characters so likable. The art of storytelling, the interpretation of memory, experiences and regrets, the importance of relationships and the detriment of fame, are what I kept thinking about after finishing this book. It is difficult for me to explain why I liked this book as much as I did. It is a quiet book, a book full of regret and some deceit and yet it made me realize how fragile relationships are, how we need to take better care of and appreciate them. Poxl's war experiences are his own, but memories and relationships are universal, this book made me think and that is a good thing and enough of a thing for one book to do. Good and poignant read.

ARC from NetGalley.
Show Less
LibraryThing member joeydag
I could try to be clever and echo from the book reviews of the internal book - yes, the title of this novel by Daniel Torday is also the title of the memoir written and published within this novel by Poxl West - so there are self-referential story telling themes galore, but it all left me cold.
LibraryThing member jscape2000
A fun adventure and coming of age story. Maybe a little heavy handed, but what drew me in was the unpacking of Poxl West's lies. It's the kind of story that falls just short of what I'd consider the top tier of deceptive narrators (Turn of the Screw comes to mind, as does Philip Roth's Ghost
Show More
Writer).
Show Less
LibraryThing member ShannonRose4
Wow. What a novel; very well done.
LibraryThing member jamieschecter
Enjoyed the story. Set in WWII and present-ish day. Multiple perspectives of a man's life and history.
LibraryThing member ansate
It starts out straight as a historical memoir, which wasn't grabbing me, but it slowly morphs into something that makes you think about how family is defined, and how much truth is or is not an important part of relationships.
Fewer

The Yid by Paul Goldberg
The Betrayers by David Bezmozgis
The Book of Aron by Jim Shepard
The Tunnel by Abraham B. Yehoshua
Love and Treasure a novel by Ayelet Waldman
14 more
Wherever You Go by Joan Leegant
The Mathematicians Shiva a novel by Stuart Rojstaczer
The Weight of Ink by Rachel Kadish
The Last Watchman of Old Cairo a novel by Michael David Lukas
Stones for Grandpa by Renee Londner
Like Dreamers: The Story of the Israeli Paratroopers Who Reunited Jerusalem and Divided a Nation by Yossi Klein Halevi
Harvest of Light by Allison Ofanansky
Songs for the Butcher's Daughter a novel by Peter Manseau
The Best Place on Earth by Ayelet Tsabari
Lioness: Golda Meir and the Nation of Israel by Francine Klagsbrun
What We Talk About When We Talk About Anne Frank by Nathan Englander
A Guide for the Perplexed by Horn Dara,
Bubbe's Belated Bat Mitzvah by Isabel Pinson
All Who Go Do Not Return: A Memoir by Shulem Deen
Fewer