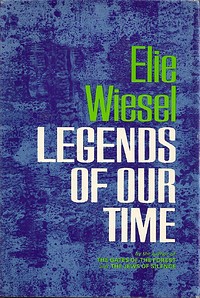 Legends of Our Time

"As this concluding volume of his memoirs begins, Elie Wiesel is forty years old, a writer of international repute." "We see him meet with world leaders and travel to regions ruled by war, dictatorship, racism, and exclusion in order to engage the most pressing issues of the day. We see him in the Soviet Union defending persecuted Jews and dissidents in South Africa battling apartheid and supporting Mandela's ascension; in Cambodia and in Bosnia, calling on the world to face the atrocities, in refugee camps in Albania and Macedonia as an emissary for President Clinton." "He chastises Ronald Reagan for his visit to the German military cemetery at Bitburg. He supports Lech Walesa but challenges some of his views. He confronts Francois Mitterrand over the misrepresentation of his activities in Vichy France. He does battle with Holocaust deniers. He joins tens of tbousands of young Austrians demonstrating against renascent fascism in their country. He receives the Nobel Peace Prize." "Through it all, Wiesel remains deeply involved with his beloved Israel, its leaders and its people, and laments its internal conflicts."--BOOK JACKET.Title Summary field provided by Blackwell North America, Inc. All Rights Reserved… (more)

LibraryThing member rondoctor
This book, like Souls on Fire, disappointed me. It is a series of vignettes about Wiesel's postwar travels and his ruminations on the death camps. I think the book is pretty lightweight and could have been better. The subject matter is dark and Wiesel's writing tends to be mystic, too much for my
Show More
taste. But that's me. Perhaps the subject matter simply requires that.
Show Less

A Jew Today by Elie Wiesel
The Town Beyond the Wall by Elie Wiesel
The Oath by Elie Wiesel
The Fifth Son by Elie Wiesel
Souls on Fire: Portraits and Legends of Hasidic Masters by Elie Wiesel
28 more
A Beggar in Jerusalem by Elie Wiesel
Messengers of God: Biblical Portraits and Legends by Elie Wiesel
The Jews of Silence: A Personal Report on Soviet Jewry by Eliezer Wiesel
Twilight by Elie Wiesel
From the Kingdom of Memory: Reminiscences by Elie Wiesel
Zalmen, or The Madness of God by Elie Wiesel
To Raise a Jewish Child: A Guide for Parents by Hayim Donin
Four Hasidic Masters and Their Struggle Against Melancholy by Elie Wiesel
Out of the Whirlwind: A Reader of Holocaust LIterature a reader of holocaust literature by Albert H. Friedlander
How to Get More Out of Being Jewish even if you are not sure you believe in God, you think going to synagogue is a waste of time, you think keeping kosher is stupid, you hated Hebrew school, or all of the above by Gil Mann
A Treasury of Jewish Folklore stories, traditions, legends, humor, wisdom, and folk songs of the Jewish people by Nathan Ausubel
Memoirs: All Rivers Run to the Sea by Elie Wiesel
Great Jews in Sports by Robert Slater
Life Is With People: The Culture of the Shtetl by Mark Zborowski
A Certain People: American Jews and Their Lives Today by Charles E. Silberman
The Shtetl: A Creative Anthology of Jewish Life in Eastern Europe by Joachim Neugroschel
The Golden Tradition: Jewish Life and Thought in Eastern Europe by Lucy S. Dawidowicz
A Vanished World by Roman Vishniac
The Big Book of Jewish Humor by William Novak
The Mezuzah in the Madonna's Foot: Oral Histories Exploring 500 Years in the Paradoxical Relationship of Spain and the Jews by Trudi Alexy
A Treasury of Jewish Humor: A Classic Collection of Humorous Stories, Satires and Witticism from the Rich Jewish Literature of All Times by Nathan Ausubel
Deborah, Golda, and Me: Being Female and Jewish in America by Letty Cottin Pogrebin
Short Friday and Other Stories by Isaac Bashevis Singer
Night by Elie Wiesel
Sabbath: The Day of Delight by Abraham Ezra Millgram
Great Jewish Thinkers of the Twentieth Century Edited with introductory essays by Simon Noveck
The Artists of Terezin by Gerald Green
The Precious Legacy: Judaic Treasures from the Czechoslovak State Collection by David A. Altshuler
Fewer