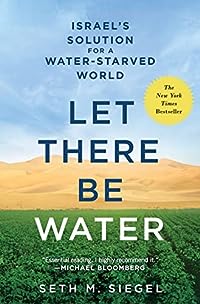 Let There Be Water: Israel's Solution for a Water-Starved World

"As every day brings urgent reports of growing water shortages around the world, there is no time to lose in the search for solutions. The US government predicts that forty of our fifty states-and sixty percent of the earth's land surface-will soon face alarming gaps between available water and the growing demand for it. Without action, food prices will rise, economic growth will slow, and political instability is likely to follow.Let There Be Water illustrates how Israel can serve as a model for the US and countries everywhere by showing how to blunt the worst of the coming water calamities.Even with sixty percent of its country a desert, not only doesn't Israel have a water problem; it has an abundance of water. Israel even supplies water to its neighbors-the Palestinians and the Kingdom of Jordan-every day.Based on meticulous research and hundreds of interviews, Let There Be Water reveals the methods and techniques of the often off-beat inventors who enabled Israel to lead the world in cutting-edge water technology. Let There Be Water also tells unknown stories of how cooperation on water systems can forge diplomatic ties and promote unity. Remarkably, not long ago, now-hostile Iran relied on Israel to manage its water systems, and access to Israel's water know-how helped to warm China's frosty relations with Israel. Every town, every country, and every reader can benefit from learning what Israel did in order to transform itself from a parched land into a water superpower.Beautifully written, Let There Be Water is an inspiring account of vision and sacrifice that will long be admired by government officials and engaged citizens facing water shortages and other seemingly insurmountable challenges"-- "With hardly a day without a water-crisis story somewhere, Let There Be Water offers prescriptions on how countries, cities, and businesses can avoid the worst of it. With sixty percent of the country in a desert and despite a rapidly growing population, Israel has been jumping ahead of the water-innovation curve for decades. Israel's national unity and economic vitality are, in part, the result of a culture and consciousness that understands the central role of water in building a dynamic, thriving society. By boldly thinking about water, Israel has transformed the normally change-averse, water-greedy world of agriculture with innovations like drip irrigation, creation of smart seeds for drought-friendly plants, and careful reuse of highly treated waste-water. Israel has also played a leading role in the emerging desalination revolution. Beyond securing its own water supply, Israel has also created a high-export industry in water technology, a timely example of how countries can build their economies while making the world better. Built on meticulous research and hundreds of interviews with both world leaders and experts in the field, Let There Be Water tells the inspiring story of how this all came to be"--… (more)

LibraryThing member DavidWineberg
Something in the water

When you realize that Israel exports two billion dollars’ worth of water from a tiny desert state overflowing with people, it might be instructive to know what it is they’re doing. Seth Siegel’s book is an in-depth, tightly focused and exhaustive look at the totality of
Show More
what the country has accomplished in water.

There are three basic levels to the story. PEOPLE must be conscious of their water consumption and actively minimize it. The need has forced TECHNOLOGY to take leaps and bounds that have vaulted Israel to world leadership in water management. And unusually, there is the POLITICAL WILLl to manage natural resources nationwide for the benefit of all, even to the point of co-operating regionally. With these three arms working together, and the only place on earth where all three are firing in sync, Israel is the poster child for survival.

On the people level, everyone shuts off showers while soaping up, closes taps when teethbrushing, and uses dual flush toilets Israel pioneered. Flow restrictors are on all showers, lush gardens are actively discouraged.

On the tech level, Israelis invented and perfected drip irrigation - to where crops need a fraction of the water (and fertilizer) that flood or spray irrigation requires, and produce more. Israel has pioneered improvements in desalination, allowing it to let lakes and rivers recover naturally while desalination provides the country’s water – to the tune of more than 90%.

In management, Israel recycles 85% of sewage (vs 8% in the USA). and sends it to agriculture. Even toilet paper is recovered and recycled, reducing landfill and increasing processing capacity by 30%. Israel is now actually short of sewage, because people have so reduced their water consumption. The country has done deals regionally, pumping Lake Galilee water to Jordan in exchange for a desalination plant on Jordanian territory in the Gulf of Aqaba. Leaks have been reduced to about 16%, because water authorities monitor all systems continuously.

Even before its founding, leaders knew water was the number one priority. The British refused to allow greater immigration because there wasn’t enough water to support the local population. At that time the population was little more than half a million. Today it is 20 times higher, and Israel exports water.

Despite Israel’s pariah status globally, Israeli water technologies and strategies are finding their way into Africa, Asia and America, as water shortages become the norm.

The book is straightforward, if a little fawning. Siegel keeps to his topic, and holds interest with results, since there are so many substantial ones to describe. He addresses the elephant in the room - the Palestinian situation - but as ever, there is no meeting of the minds. Still, 96% of West Bank Palestinians have state-provided clean water, where none had it before.

Let There Be Water is a blueprint for survival: necessary, critical, successful, and replicable.

David Wineberg
Show Less
1 more
LibraryThing member sriram_shankar
This is a very good book on how communities and governments across the world have taken distribution and consumption of potable water for granted. Sooner than later we are bound to end up in a situation where water will not be as easily available as it is today. This book documents the rise of a
Show More
'water-industry' in Israel, a country, which because of its geographical and strategic location, has come to treat water as an asset on the same level as some countries consider uranium deposits or gold reserves.

While Israel has definitely set an example for others to emulate, I thought the story was devoid of any criticisms. It is almost as if the entire industry is perfect - from government to private participation to public-private partnerships.

The author would have done well to include some cases of how innovations etc. failed to take root and why.
Show Less
Fewer

Like Dreamers: The Story of the Israeli Paratroopers Who Reunited Jerusalem and Divided a Nation by Yossi Klein Halevi
Start-up Nation: The Story of Israel's Economic Miracle by Dan Senor
Lioness: Golda Meir and the Nation of Israel by Francine Klagsbrun
The Prime Ministers: An Intimate Narrative of Israeli Leadership by Yehuda Avner
The Israelis: Founders and Sons by Amos Elon
5 more
Killing a King: The Assassination of Yitzhak Rabin and the Remaking of Israel by Dan Ephron
My Promised Land: The Triumph and Tragedy of Israel by Ari Shavit
A Convenient Hatred: The History of Antisemitism by Phyllis Goldstein
Myths and Facts: A Guide to the Arab-Israeli Conflict by Mitchell G. Bard
Great Jewish Women by Elinor Slater
Fewer