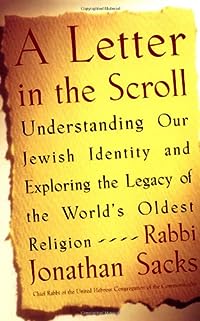 A Letter in the Scroll: Understanding our Jewish Identity and Exploring the Legacy of the World's Oldest Religion

For too long, Jews have defined themselves in light of the bad things that have happened to them. And it is true that, many times in the course of history, they have been nearly decimated: when the First and Second Temples were destroyed, when the Jews were expelled from Spain, when Hitler proposed his Final Solution. Astoundingly, the Jewish people have survived catastrophe after catastrophe and remained a thriving and vibrant community. The question Rabbi Jonathan Sacks asks is, quite simply: How? How, in the face of such adversity, has Judaism remained and flourished, making a mark on human history out of all proportion to its numbers? Written originally as a wedding gift to his son and daughter-in-law, "A Letter in the Scroll" is Rabbi Sacks's personal answer to that question, a testimony to the enduring strength of his religion. Tracing the revolutionary series of philosophical and theological ideas that Judaism created -- from covenant to sabbath to formal education -- and showing us how they remain compellingly relevant in our time, Sacks portrays Jewish identity as an honor as well as a duty. The Ba'al Shem Tov, an ei… (more)

Sacred Fragments: Recovering Theology for the Modern Jew by Neil Gillman
The Rosh Hashanah Anthology by Philip Goodman
How to Get More Out of Being Jewish even if you are not sure you believe in God, you think going to synagogue is a waste of time, you think keeping kosher is stupid, you hated Hebrew school, or all of the above by Gil Mann
Halakhic Man by Joseph Dov Soloveitchik
Judaism's 10 Best Ideas: A Brief Guide for Seekers by Arthur Green
13 more
This Is My God by Herman Wouk
The Shavuot Anthology by Philip Goodman
Our Fathers' Wells: A Personal Encounter with the Myths of Genesis by Peter Pitzele
To Life! A Celebration of Jewish Being and Thinking by Harold S. Kushner
Response to Modernity: A History of the Reform Movement in Judaism by Michael A. Meyer
Saying Kaddish: How to Comfort the Dying, Bury the Dead & Mourn As a Jew by Anita Diamant
Judaism for Beginners by Charles Szlakmann
The Vanishing American Jew: In Search of Jewish Identity for the Next Century by Alan M. Dershowitz
Living Judaism: The Complete Guide to Jewish Belief, Tradition, and Practice by Wayne D. Dosick
Jew vs. Jew: The Struggle for the Soul of American Jewry by Samuel G. Freedman
The Language of Judaism by Simon Glustrom
To Be a Jew: A Guide to Jewish Observance in Contemporary Life by Hayim Donin
Gates of Mitzvah: A Guide to the Jewish Life Cycle by Simeon J. Maslin
Fewer