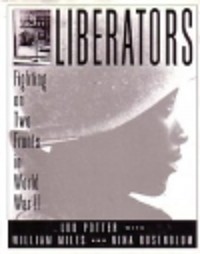 "African-American soldiers - shunted in and out of the military, restricted to menial "service" positions, called to duty only in times of dire crisis." "Brutal lynchings, frequent demonstrations, and strict segregation characterized racial climate of 1940s America. But World War II, when manpower grew short in Europe, black soldiers were sent abroad to help combat the Nazis." "The 761st Tank Battalion was on the front line as a spearhead for General Patton's Third Army. The tankers aided the Allied victory and helped liberate the concentration camps at Buchenwald and Dachau." "Utterly unprepared for the atrocities they witnessed, the soldiers recognized the bitter irony of one persecuted people rescuing another. The camp inmates were equally astounded by the sight of their dark-skinned liberators - some of them had never seen a black person before." "Sentiments were mixed at war's end as the prepared to return home: "In our own country, we was nothing in uniform. But over there we were treated like kings. We ate together, slept together. What the hell did I want to go back to America for?"" "For three decades, the U.S. refused to recognize these soldiers as heroes. In 1978 the battalion's combat records were brought to the attention of President Carter, who presented the 761st with the highest military honors." "In 1991 survivors from both sides - the liberators as well as the liberated - returned to Buchenwald to reflect on their pasts and to participate in an extraordinary public television documentary. Liberators, the stunningly illustrated companion volume, recovers an important yet little-known chapter in American history."--BOOK JACKET.Title Summary field provided by Blackwell North America, Inc. All Rights Reserved… (more)

Judenrat: The Jewish Councils in Eastern Europe Under Nazi Occupation by Isaiah Trunk