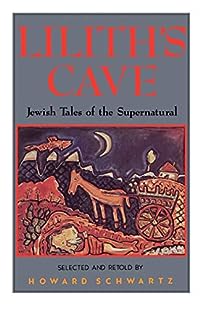 Once upon a time in the city of Tunis, a flirtatious young girl was drawn into Lilith's dangerous web by glancing repeatedly at herself in the mirror. It seems that a demon daughter of the legendary Lilith had made her home in the mirror and would soon completely possess the unsuspectinggirl. Such tales of terror and the supernatural occupy an honored position in the Jewish folkloric tradition. Howard Schwartz has superbly translated and retold fifty of the best of these folktales, now collected into one volume for the first time. Gathered from countless sources ranging from the ancient Middle East to twelfth-century Germany and later Eastern European oral tradition, thesecaptivating stories include Jewish variants of the Pandora and Persephone myths and of such famous folktales as "The Fisherman and His Wife," "The Sorcerer's Apprentice," and "Bluebeard," as well as several tales from the Middle Ages that have never before been published. Focusing on crucial turning points in life--birth, marriage, and death--the tales feature wandering spirits, marriage with demons, werewolves, speaking heads, possession by dybbuks (souls of the dead who enter the bodies of the living), and every other kind of supernatural adversary. Readerswill encounter a carpenter who is haunted when he makes a violin from the wood of a coffin; a wife who saves herself from the demoness her husband has inadvertently married by agreeing to share him for an hour each day; and the age-old tale of Lilith, Adam's first wife, who refused to submit to himand instead banished herself from the Garden of Eden to give birth to the demons of the world. Drawn from Rabbinic sources, medieval Jewish folklore, Hasidic texts, and oral tradition, these stories will equally entrance readers of Jewish literature and those with an affection for fantasy and the supernatural.… (more)

LibraryThing member kyynhima
What makes these retold folklore stories so great is that Schwartz have had the decency to include a Sources and commentary section 40 pages long, alongside with bibliography, glossary and index - something I'd like to see far more often in such books.

Elijah's Violin & Other Jewish Fairy Tales by Howard Schwartz
Yiddish Folktales by Beatrice Weinreich
A Treasury of Jewish Folklore stories, traditions, legends, humor, wisdom, and folk songs of the Jewish people by Nathan Ausubel
The Shtetl: A Creative Anthology of Jewish Life in Eastern Europe by Joachim Neugroschel
Gates of Mitzvah: A Guide to the Jewish Life Cycle by Simeon J. Maslin
22 more
Deborah, Golda, and Me: Being Female and Jewish in America by Letty Cottin Pogrebin
Finding God: Ten Jewish Responses ten Jewish responses by Rifat Sonsino
The Third Jewish Catalog: Creating Community by Sharon Strassfeld
Jewish Folktales by Pinhas Sadeh
The American Jewish Album: 1654 to the Present by Allon Schoener
Twelve Jewish Steps to Recovery: A Personal Guide to Turning from Alcoholism and Other Addictions by Kerry M. Olitzky
The Abandonment of the Jews: America and the Holocaust, 1941-1945 by David S. Wyman
The Book of Miracles: A Young Person's Guide to Jewish Spiritual Awareness by Lawrence Kushner
Teaching Your Children About God: A Modern Jewish Approach by David J. Wolpe
To Raise a Jewish Child: A Guide for Parents by Hayim Donin
How to Get More Out of Being Jewish even if you are not sure you believe in God, you think going to synagogue is a waste of time, you think keeping kosher is stupid, you hated Hebrew school, or all of the above by Gil Mann
The Sukkot/Simhat Torah Anthology by Philip Goodman
Mimekor Yisrael: Classical Jewish Folktales by Micah Joseph Berdichevsky
Written Out of History: Our Jewish Foremothers by Sondra Henry
The Rosh Hashanah Anthology by Philip Goodman
Mixed Blessings marriage between Jews and Christians by Paul Cowan
Great Jews in Sports by Robert Slater
A Portion in Paradise, and Other Jewish Folktales by H. M. Nahmad
Something from Nothing, Adapted from a Jewish Folktale by Phoebe Gilman
Congregation: Contemporary Writers Read the Jewish Bible by David Rosenberg
Leo Rosten's Treasury of Jewish Quotations by Leo Calvin Rosten
More Wise Men of Helm and Their Merry Tales by Solomon Simon
Fewer