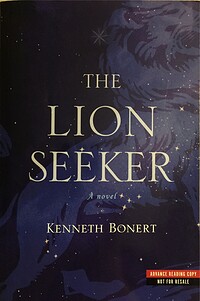 The Lion Seeker: A Novel

Are you a stupid or a clever? Such is the refrain in Isaac Helger's mind as he makes his way from redheaded hooligan to searching adolescent to striving young man on the make. His mother's question haunts every choice. Are you a stupid or a clever? Will you find a way to lift your family out of Johannesburg's poor inner city, to buy a house in the suburbs, to bring your aunts and cousins from Lithuania? Isaac's mother is a strong woman and a scarred woman; her maimed face taunts him with a past no one will discuss. As World War II approaches, then falls upon them, they hurtle toward a catastrophic reckoning. Isaac must make decisions that, at first, only seem to be life-or-death, then actually are. Meanwhile, South Africa's history, bound up with Europe's but inflected with its own accents--Afrikaans, Zulu, Yiddish, English--begins to unravel. Isaac's vibrant, working-class, Jewish neighborhood lies near the African slums; under cover of night, the slums are razed, the residents forced off to townships. Isaac's fortune-seeking takes him to the privileged seclusion of the Johannesburg suburbs, where he will court forbidden love. It partners him with the unlucky, unsinkable Hugo Bleznick, selling miracle products to suspicious farmers. And it leads him into a feud with a grayshirt Afrikaaner who insidiously undermines him in the auto shop, where Isaac has found the only work that ever felt true. And then his mother's secret, long carefully guarded, takes them to the diamond mines, where everything is covered in a thin, metallic dust, where lions wait among desert rocks, and where Isaac will begin to learn the bittersweet reality of success bought at truly any cost. A thrilling ride through the life of one fumbling young hero, The Lion Seeker is a glorious reinvention of the classic family and coming-of-age sagas. We are caught--hearts open and wrecked--between the urgent ambitions of a mother who knows what it takes to survive and a son straining against the responsibilities of the old world, even as he is endowed with the freedoms of the new.… (more)

LibraryThing member Amusedbythis
This novel is the coming of age story of a Jewish Lithuanian immigrant to South Africa in the years post-World War I. It was initially difficult to become interested in the story but that changed as I continued reading. The authored peppered the narrative with Yiddish phrases that detracted from
Show More
his tale rather than enhanced it. Eventually, the plot twists and the agony of the characters made the novel worth reading.
Show Less
3 more
LibraryThing member cathgilmore
The son of Lithuanian Jews who left the country in the 1920s and moved to South Africa, Isaac Helger grows up believing the only way to have self-worth is through money. “Working” for a living, as his watch repairman father does, is embarrassing. As the protagonist in Kenneth Bonert’s novel,
Show More
The Lion Seeker, Isaac embraces his mother’s credo of “Are you a stupid or a clever?” by dropping out of school and getting a job, but always with an angle and always looking up. A good job with a moving company is not enough; he has to use the truck in his off hours as a bus for workers and is fired when he is caught. From there he moves from one scheme to the next, sometimes with success but ultimately putting himself in a position where he has to choose between himself and his family.

There are many books out there about the Jews and World War II but The Lion Seeker comes from the unique angle of the Jews in South Africa. Bonert masters the patois of this community, using a blend of Yiddish, Afrikaans, Zulu and English that brings to life the diversity of these people and their deep desire to fit into their surroundings. At the same time, Bonert creates in Isaac a character that never fits in, who rebels and pushes against societal norms in his personal and professional life. He falls in love with a golden blonde goddess named Yvonne, the wealthy daughter of clients and does not seem to understand that she is using him until it is too late. The only constant in Isaac’s life is his all-consuming desire to give his mother the life he feels she deserves but for this deeply flawed man even that becomes negotiable. As the war draws closer, he is forced to make a decision about his future and the future of his mother’s family who are trapped in Lithuania.

The Lion Seeker explores moral themes on the large scale of humanity and the more intimate level of one man’s nature. Bonert succeeds at creating larger-than-life characters and stories that lure the reader through the novel but with so many it is difficult to develop them all. This is not enough to detract from the novel’s storytelling value but may mean that despite being over 570 pages some readers are left wanting more.
Show Less
LibraryThing member Smits
A difficult book to read but very well written. The story of Isaac Helger a jewish boy from Lithuaninan refugees growing up poor in Johannesburg S. Africa. Terrible things happen to Isaac and he makes terrible decisions based all on his love for his mother and his desire to make her happy.
LibraryThing member GirlWellRead
I received this book for free through Goodreads First Reads.

Kenneth Bonert’s debut is fresh, exciting, and confident. The mother figure, Gitelle is fierce with love for her children juxtaposed against the fierce disfiguring facial scar that drives the plot's backstory. Her son Isaac, with hair
Show More
"gleaming like fresh-skinned carrots" is every bit the spirited red head. At times I really liked Isaac, other times I found his schemes tiring and him to be very naive but if anything, he is interesting.

Bonert fleshes out his story in rolling scenes, dialect, and sharp prose. With its sweeping scenes I could see this book easily being adapted for the big screen.

My only complaint is that I felt the book to be a bit long and that Bonert was trying to hard to prove himself. The writing speaks for itself - Bonert has arrived.
Show Less
Fewer

The Best Place on Earth by Ayelet Tsabari
The Marrying of Chani Kaufman by Eve Harris
The Betrayers by David Bezmozgis
Waking Lions by Ayelet Gundar-Goshen
The Imposter Bride by Nancy Richler
9 more
I Am Forbidden by Anouk Markovits
The Book of Aron by Jim Shepard
Wherever You Go by Joan Leegant
What We Talk About When We Talk About Anne Frank by Nathan Englander
Enchantress: A Novel of Rav Hisda's Daughter by Maggie Anton
The Last Watchman of Old Cairo a novel by Michael David Lukas
All Other Nights by Dara Horn
The Mathematicians Shiva a novel by Stuart Rojstaczer
A Guide for the Perplexed by Horn Dara,
Fewer