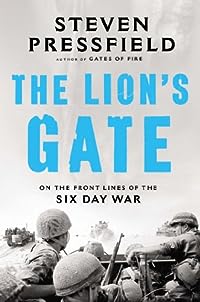 The Lion's Gate: On the Front Lines of the Six-Day War

"We are being bullied, my father said, and the only way to handle a bully is to punch him in the face. "What would you do?" I asked. "Strike now. As soon as possible. Meet the enemy straight-up and destroy him. There is no other way." -YAEL DAYAN, daughter of Moshe Dayan, to Steven Pressfield June 5, 1967. The nineteen-year-old state of Israel is surrounded by enemies who want nothing less than her utter extinction. The Soviet-equipped Egyptian Army has massed a thousand tanks on the nation's southern border. Syrian heavy guns are shelling her from the north. To the East, Jordan and Iraq are moving mechanized brigades and fighter squadrons into position to attack. Egypt's President Nasser has declared that the Arab force's objective is "the destruction of Israel." The rest of the world turns a blind eye to the new nation's desperate peril. June 10, 1967. The Arab armies have been routed, ground divisions wiped out, air forces totally destroyed. Israel's citizen-soldiers have seized the Gaza Strip and the Sinai Peninsula from Egypt, the Golan Heights from Syria, East Jerusalem and the West Bank from Jordan. The land under Israeli control has tripled. Her charismatic defense minister, Moshe Dayan, has entered the Lion's Gate of the Old City of Jerusalem to stand with the paratroopers who have liberated Judaism's holiest site-the Western Wall, part of the ruins of Solomon's temple, which has not been in Jewish hands for nineteen hundred years. It is one of the most unlikely and astonishing military victories in history. Drawing on hundreds of hours of interviews with veterans of the war-fighter and helicopter pilots, tank commanders and Recon soldiers, paratroopers, as well as women soldiers, wives, and others-bestselling author Steven Pressfield tells the story of the Six Day War as you've never experienced it before: in the voices of the young men and women who battled not only for their lives but for the survival of a Jewish state, and for the dreams of their ancestors. By turns inspiring, thrilling, and heartbreaking, The Lion's Gate is both a true tale of military courage under fire and a journey into the heart of what it means to fight for one's people"--… (more)

LibraryThing member Judiex
While I usually do not read war or action stories, my adrenaline was kicking in on overdrive as I sped through THE LION’S GATE. I knew many of the details before I had even opened the book, but it was so real and fresh that I felt I was actually there: in the airplanes, helicopters, jeeps, tanks,
Show More
and trudging along in IDF boots.
I remember following the Six Day war as it happened, beginning with Egypt’s closure of the Straits of Tiran and the UN leaving the Sinai. I was living in Ohio and all the media reports were talking about all the damage being inflicted on the Israeli military and Israeli cities and civilians. It was frightening. Soon after the end of the war, the real story got out: Against amazing odds, Israel had destroyed the Egyptian air force within a few hours and had captured all of the Sinai, The West Bank, and Golan Heights. Afterwards, I followed media reports and read books about the war. None of them matched the story revealed in Steven Pressfield’s THE LION’S GATE.
Formatted as a chronological oral history, Pressfield presents key segments of the war. He interviewed sixty three military personnel who fought in the Sinai, Jerusalem, and the Golan and lets them tell what they experienced at that critical time. We are there as the plans of attack for Sinai, Jerusalem, and Golan are drawn and redrawn. Through their words, they tell us what was going on in the minds of the Israeli military personnel directly involved. They relate how the IDF operates: Orders from the top are frequently ignored or altered because of the situation on the ground. While there were orders to not attack civilians or religious sites, they had to decide what should be done when they were attacked by civilians or from mosques or schools? We learn what Israel and Jerusalem mean to the Jews and why.
IDF members also tell of their experiences with some of the Arab civilians they encounter during the battle and of a meeting with an 80-year-old Jewish grandmother who had to flee her home in the Jewish Quarter of Jerusalem in 1948.
THE LION’S GATE tells of the frustration of the military personnel waiting for Prime Minister and Minister of Defense Levi Eshkol to decide to take action. Russia was shipping arms and personnel to Egypt. Eshkol was waiting for the US to intervene. Meanwhile, the Egyptian forces were getting stronger and better prepared which would result in more casualties for the Israelis.
Despite assurances from Israel that areas under Jordanian control would be left alone if he stayed out of the battle, we are told why King Hussein got involved, which resulted in the his loss of The West Bank.
Moshe Dayan had died long before the book was written, but he left his own writings and his daughter and wife were interviewed. He was very prescient: He warned that if Israel won, the world would change its characterization of Israel from being David to being Goliath and “demand from us retrenchment and retreat.” He warned that if the actions of religious extremists were allowed to grow, the results would be catastrophic. Born in Israel, he also spoke of how to allow the Arabs to maintain their pride and what they will do to save face.
The books brought out many interesting points, some of which were new to me:
In the 1956 War, which was partly a cause of the Six Day War, under Ariel Sharon, Israel captured more Egyptian territory than France and England had planned;
Egypt’s lies kept the UN from calling a cease fire and the Russians from sending more aid;
In 1967, Israel’s population was 2.7 million people, many of them recent immigrants who had been evicted from their homes in the Middle East and North Africa. They lacked the skills necessary to defend their new home; many did not yet speak Hebrew. Israel was surrounded by 122 million Arabs;
Sharon believed “As long as the Arabs preserve a gleam of hope that they will succeed in getting rid of us, nothing in the world can cause them to relinquish this hope because they are not a rabble but a living people....Only when the extremist groups...lose their influence and only then will their influence be transferred to more moderate groups...[who will be able to] offer suggestions for compromise....so that both people can live together in peace, like good neighbours.”
“Hebrew is notoriously deficient in profanity;”
While in exile, Jews yearned to return to Israel. The national anthem, Hatikva, speaks of The Hope. Even today, some preferred to deal with the dream rather than the reality;
THE LION’S GATE brought out all the involvement of a well-presented documentary.
This book was an advanced copy from Goodreads.
Show Less
2 more
LibraryThing member viking2917
A taut, inspiring, and often heartbreaking look at the Six Day War. The style is very cinematic, and halfway between history and historical fiction. Kind of like reading a documentary. The research is meticulous, the stories often too surprising to seem true. Was struck by how WWII-like the
Show More
pictures are. Highly recommended.
Show Less
LibraryThing member jimocracy
I really like Steven Pressfield's novels but this one just didn't work out well for me. I think the main turn off was the subject matter. The state of Israel is a political hot-button and I'm not a fan of their current war-mongering activities. Politically, I also do not agree with the creation of
Show More
the state of Israel, to begin with); at least not in its current geographical location. Taking a swathe of land from Germany would have made more sense.

From that frame of mind, it was hard to get behind the characters of this book as protagonists (which I know they were meant to be). That brings up another problem with the novel; having too many characters. I could appreciate the scope that the author was presenting; many voices telling their versions of a greater narrative. But that style works better in documentaries than it does in novels.
Show Less
Fewer

Like Dreamers: The Story of the Israeli Paratroopers Who Reunited Jerusalem and Divided a Nation by Yossi Klein Halevi
Anonymous Soldiers: The Struggle for Israel, 1918-1947 by Bruce Hoffman
O Jerusalem! by Larry Collins
The Prime Ministers: An Intimate Narrative of Israeli Leadership by Yehuda Avner
The Seventh Day: Soldiers' Talk About the Six-Day War by Avraham Shapira
2 more
Brotherhood of Warriors: Behind Enemy Lines with a Commando in One of the World's Most Elite Counterterrorism Units by Aaron Cohen
Ally: My Journey Across the American-Israeli Divide by Michael B. Oren
Fewer