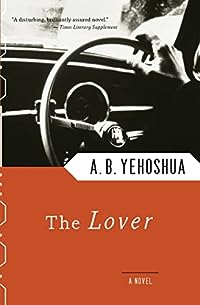 by Abraham B. Yehoshua

A man searches for his wife's lover during the Yom Kippur War, in a novel by the award-winning author hailed as the "Israeli Faulkner" (The New York Times).   In Haifa, at the dawn of Israel's 1973 war, the lives of a middle-class garage owner named Adam, and his schoolteacher wife, Asya, have come undone in ways for which they are totally unprepared. Adam has just found out from his distraught wife that she has been having affair--and has fallen in love with--the enigmatic Gabriel Arditi. But Asya's hysteria isn't rooted in her admission of infidelity--but rather her discovery that Gabriel has disappeared. Has he gone to war? Has he been killed? Or has he left Asya for another?  Finding him has become Asya's obsession, and it's about to become her husband's, too.   Set against the backdrop of a turbulent moment in history and featuring a myriad of characters--each with his or her own versions of events--The Lover is a witty, suspenseful, audacious novel that lays bare the deep-rooted tensions within families, between generations, and between Jews and Arabs, offering "a profound study of personal and political trauma" (Daily Telegraph), from a recipient of honors including the National Jewish Book Award, the Man Booker International Prize, and the Los Angeles Times Book Prize.… (more)

LibraryThing member TheAmpersand
The best thing I can say about A.B. Yehoshua's "The Lover" is that it isn't a political novel, or, rather, that it's not just a political novel. It's set in Haifa just after the 1973 Yom Kippur War, so, as expected, the politics of the place and time are constantly felt. But it's the characters in
Show More
it that seem to matter most to the author and which will probably stick with me. In a sense, "The Lover" is the story of a disintegrating marriage that could be set anywhere. Asya and Adam are wealthier and more successful than they imagined they'd be, but stolid, silent Adam seems adrift and Asya, who is wrapped up in her teaching job, seems to be growing old a bit too quickly.The best-drawn character in the book is their daughter, Dafi, whose body and will seem to be maturing at a fantastic pace and who seems estranged from her parents. Asya has a brief affair with a rather recently returned French Jew whose identity and current whereabouts slowly become Adam's obsession. A blue 1947 Morris Minor plays something of a starring role. Adam enlists Na'im, an Israeli Arab teenager who has recently begun working for him at his garage, to help him find out where he's gone to, and, from that point, things play out as they usually do. As a plot, it's good enough.

But Yehoshua is particularly good at describing -- and making you feel -- the emotional strain this small family is being subjected to. If anything, his description of their emotional distress is, if anything, too sharp: I read "The Lover" constantly waiting for the other shoe to drop, for the next plot point to blow the entire novel apart. I suppose it's fitting, as it's set in a fairly tense time and place, but, good as it was, reading this one was sort of exhausting. The reader might feel this all the more keenly because the emotional stress that they're under seems to knock everybody's sleep cycle far out of balance. Dafi suffers from acute insomnia, while Asya works herself into a stupor and spends much of her time at home asleep. She dreams, and -- if only to remind the reader that this novel really is about Israelis, not just Israeli politics -- vivid descriptions of her dreams are included in the text of the novel. Adam sleeps soundly but, on several occasions, also forgoes sleep for several days in a row searching for his wife's former paramour. As the novel goes on, it becomes difficult to be sure exactly who the title refers to: there's not much cruelty in this novel, but frustrated -- even misshapen -- forms of love seem to trap its characters in constant turmoil, and, as the novel comes to a close, it becomes simultaneously more sexual and more spiritual. I'm not sure the novel ever reaches a properly satisfying conclusion on all fronts. A good book, but I felt like picking up something nice and light after reading this one.
Show Less
1 more
LibraryThing member Miguelnunonave
A strange book, the search for a vanished man. Somewhat inconsequential.
Fewer