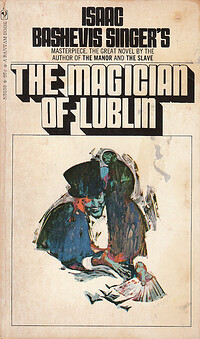 The Magician of Lublin

The fiftieth anniversary of a lost classic--a deceptively sophisticated tale of sexualcompulsion and one man's flight from love Yasha Mazur is a Houdini-like performer whose skill has made him famous throughout eastern Poland. Half Jewish, half Gentile, a freethinker who slips easily between worlds, Yasha has an observant Jewish wife, a Gentile assistant who travels with him, and a mistress in every town. For Yasha is an escape artist not only onstage but in life, a man who lives under the spell of his own hypnotic effect on women. Now, though, his exploits are catching up with him, and he is tempted to make one finalescape--from his wife and his homeland and the last tendrils of his father's religion. Set in Warsaw and the shtetls of the 1870s--but first published in 1960--Isaac Bashevis Singer's second novel hides a haunting psychological portrait inside a beguiling parable. At its heart, this is a book about the burden of sexual freedom. As such, it belongs on a small shelf with such mid-century classics asRabbit, Run;The Adventures of Augie March; andThe Moviegoer. As Milton Hindus wrote inThe New York Times Book Review, "The pathos of the ending may move the reader to tears, but they are not sentimental tears . . . [Singer] is a writer of far greater than ordinary powers."… (more)

LibraryThing member kirstiecat
This novel really reminded me a great deal of Dostoevsky's novels and there are times of madness that the protagonist goes through that recalled Raskolnikov's trials of mental anguish in Crime and Punishment...maybe not to that extent but there was definitely a strong connection I felt between
Show More
those unrelated protagonists. Of course, Singer is Polish and he's also Jewish and that plays into his main character's insanity a little bit, which are some key differences but Dostoevsky too dealt with morality and the mind quite regularly even if from a different religious perspective.

Our protagonist, Yasha, is one that couldn't quite be called a hero with a tragic flaw but the reader does long to like him. He's an engaging magician who has had endless affairs. At his current age of nearly 40, he's been touring around Poland and is married with three additional mistresses. The effects that cheating has on the other women are quire dire and one senses Yasha truly feels bad about these things just as one gets the impression that Yasha is completely sincere in his many promises to his wife and mistresses (and later on to God) in the first moments of uttering them. It's almost like several people operating in the body of one man, which would of course drive anyone a little batty. And, as in Dostoevsky's many protagonist, Yasha has some serious money problems, which really don't help his own mental health issues any. There is also, of course, a little alcohol involved.

Singer has a really nice sense of irony and guilt too and puts Yasha in dangerous and precarious positions that drive him to even greater extremes of thought and paranoia. I hadn't seen the ending coming, I have to admit, which definitely does say something in and of itself but, without giving too much away, I found the ending to be quite essential as well as it is intriguing. This is the first novel I have read by Singer, the author was recommended by my mother, and I definitely want to read more!

pg. 117 "He marveled at his own entanglements, yet took some perverse pleasure from them, as if his life were a storybook in which the situation grows tenser and tenser until one can barely wait to turn the page."


pg. 129 "Yasha was well aware that his worst enemy was his ennui. To escape it, he had committed all of his follies. It lashed at him like so many whips. Because of it, he had loaded himself down with all sorts of burdens.


pg 155 "It now seemed to Yasha that the street and the synagogue denied each other. If one were true, then the other was certainly false."

pg, 206 "Some shadowy form lurked nearby, ready to leap upon him and attack him with tooth and claw-something monstrous and nameless. He has been familiar with this presence from childhood. It revealed itself to him in nightmares. It was, he assured himself, a figment of his imagination, but nevertheless he could not deny its existence. He held his breath. Such terror could be endured only a few seconds."

pg, 207 "He walked to Nowiniarsky Street ad came out on a street called Bolesc (Pain in Polish). That should be the name of all streets, he said to himself. The whole world is one great agony."

pg. 212 "He kept grimacing at Yasha. His watery, crossed eyes rolled in exaltation, the ecstasy of one on the brink of madness...Savagery was stamped upon his features. He was still in that primeval forest from which mankind was evolved. Such men die laughing, Yasha said to himself."

pg. 213 "Yasha bent his head, he belched and tasted an unfamiliar bitterness. I know, it's the world!"

pg. 220 "He had looked on the faces of death and lechery and had seen that they were the same."

Show Less
5 more
LibraryThing member c.egan
Yasha the Magician can do everything: conjure, hypnotise, swallow swords, walk the tightrope, pick locks and escape. Only one thing he cannot do: sort his life out. With the fourth woman simultaneously, his funds are running out, and his nerves are giving in.

How will Yasha, the escapist, free
Show More
himself of this invisible entanglement? Shall he abandon his wife and marry his latest acquaintance to start a new life in Italy? Shall he risk ever more perilous stunts to make more money? Or use his skills to become a big-time burglar? Leave everything behind and set out for the New World? Find the faith of his fathers? Or take his life?

In this mesmerising novel, Isaac Singer, whom we might well call the Magician of Warsaw, once more conjures up the lost world of Eastern Europe before the World Wars. By the way, the story is almost entirely set in Warsaw, not in Lublin.

A jewel for anyone interested in Ashkenazi Judaism, this work will not fail to capture the attention of anyone else - if he is ready to spend some time with characters and stories as crazy as life itself.

Christina Egan
Show Less
LibraryThing member ursula
A slim volume, The Magician of Lublin packs a lot of moralizing into few pages. Yasha Mazur is the title magician, and although he's terrific at picking locks and making escapes, he can't seem to escape the circumstances of his life closing in on him. He's got a wife, an assistant who is also his
Show More
lover, another lover, and yet another lover, the last of whom he is planning to run away with. But things are kind of a mess, which is surprising to Yasha, if not to the reader.

Yasha's thoughts turn to the nature of the world, and fate, and the role of religion. He contemplates what path he is being drawn to take and why. He wonders if things that happen to him are signs, and whether to resist them or give in to them. Morality tales are not really my thing, and this book is no exception. I prefer shades of gray to the black and white choices Yasha sees in his world. I found the book easy reading, but not entirely pleasant.

Quote: "The whole world acts out a farce because everyone is ashamed to say: I do not know."
Show Less
LibraryThing member soylentgreen23
Yasha Mazur is a magician par excellence, and a womaniser to boot, with girls in every city he visits as he works his way around Poland performing his tricks. However, his life begins to crumble around him as he finds juggling his various relationships, and his spiritual inclinations, too much to
Show More
handle. As a study of a life in disintegration, it's very well put together, but at times there's a little too much in the way of religious preaching.
Show Less
LibraryThing member Lynsey2
I really had a love hate relationship with this book and found it hard to rate. It is a well told story but I disliked the ending so much that I changed my rating from 4 stars to 3. Yasha, The Magician of Lublin, is experiencing a crisis of faith. He considers himself an honorable man despite the
Show More
fact that he has 3 mistresses. He hits rock bottom and it his resolution to his crisis that I find so dissatisfying.
Show Less
LibraryThing member DeltaQueen50
The Magician of Lublin by Isaac Bashevis Singer was originally written in Yiddish and later translated to English. Set in Russian ruled Poland in the late 19th century, it is the story of Yasha Mazur, a magician from the town of Lublin who travels around Poland to perform. Although Jewish he is not
Show More
particularly devout. He leads a carefree life of travel and performing, leaving his pious wife at home in Lublin. He has lovers in many of the cities that he visits as well as being involved with his young assistant. Currently however he is obsessing over Emilia, a Catholic widow who lives in Warsaw with her daughter.

Although on the surface, Yasha appear to be confident that he can continue to manipulate his various women, deep inside he knows he is living a deceitful and senseless life. When things go wrong and he finds his life has shattered, he repents of his sins, returns home to Lublin and finally turns to his Jewish roots.

The Magician of Lublin is a very well written story about faith and morality. I listened to an audio version as read by Larry Keith. Yasha lived a life of self-indulgence, he knew he was doing wrong but did not acknowledge his guilt. Eventually issues arose that forced him to turn and embrace both his Jewish faith and identity. I thought this was both a very clever and engaging story about living one’s life within the boundaries one is born with, although Yasha professed to not believing in religion or the traditional Jewish customs, those are exactly what he turned to when in need.
Show Less
Fewer