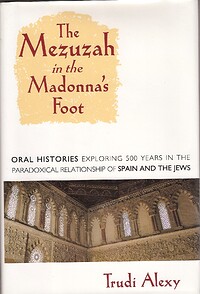 The Mezuzah in the Madonna's Foot: Oral Histories Exploring 500 Years in the Paradoxical Relationship of Spain and the Jews

"Tortured and burned at the stake during the Inquisition - after 700 years of peaceful coexistence with Christians and Moors during the Golden Age - all surviving Jews who refused to convert were expelled from Spain in 1492 and were not allowed to set foot on Spanish soil for more than four centuries. Yet during World War II - when most Allied and neutral nations, including the United States, closed their eyes as well as their borders - thousands of Jews fleeing from the Holocaust were able to survive because they were granted sanctuary in Spain." "The astonishing story of how Jews found asylum from Hitler's Final Solution under Franco's Fascist regime is one of the startling paradoxes of that terrible time - so improbable and controversial that it has gone largely ignored until now. In The Mezuzah in the Madonna's Foot, Trudi Alexy lets us hear at firsthand the harrowing accounts of Jewish refugees who braved the forbidding trek across the Pyrenees during the worst period of Nazi persecution, and of their rescuers in Spain who put their own lives in danger to save and sustain them." "Whether it is in the memories of Nina Mitrani, who as a bride of eighteen followed alone after her husband's escape into Spain (where she remains to this day); or Lisa Fittko, who helped smuggle the ailing Walter Benjamin to safety only to learn of the famed German-Jewish writer's suicide soon there-after; or Renee Reichmann, whose heroic rescue operation in behalf of Hungarian Jews has been likened to that of Raoul Wallenberg, this extraordinary oral history bears eloquent witness to the complex, contradictory relationship between Spain and the Jews and to the generosity and kindness extended by ordinary Spanish citizens, the clergy, local police, and government officials in behalf of a people who had been so long barred from their land." "The author began this book as an exploration into her own past, hoping to reconnect to the Jewish heritage she was deprived of as a child when her thoroughly assimilated family fled during World War II from Prague to Paris, and then hid in Barcelona as hastily baptized Catholics, before finally emigrating to the United States." "Her search for her lost birthright lasted more than four years and led Trudi Alexy to speak with sixty people in five countries on three continents. Along the way she discovered her own mystical kinship with the Marranos, Spain's "Secret Jews," who lived as Catholics in name only and passed on to their descendants both their hidden ancient Jewish traditions and their fear of being found out." "She examines too the experiences of the present-day descendants of the Marranos who followed Columbus to the New World. Nearly 500 years later in the American Southwest, they still hold on to their Christian cover while concealing their Jewish identities. The book ends with a candid interview with Spain's King Juan Carlos and Queen Sofia about the paradoxical relationship of Spain and the Jews."--BOOK JACKET.Title Summary field provided by Blackwell North America, Inc. All Rights Reserved… (more)

LibraryThing member lilithcat
There are a couple of books here, fighting for supremacy!

The first book is about how and why Spain opened its borders to Jewish refugees from the Holocaust.

"The irrefutable fact remains that, although the presence of Jews placed the whole country at risk of being drawn into another ar or occupied
Show More
by Hitler's forces, Fascist Spain, both officially and unofficially, accepted thousands of foreign Ashkenazic Jews within its borders and allowed them to remain until they were able to secure residence elsewhere."

Why? The question is probably unanswerable, though Alexy tries her best. Guilt over the expulsions of 1492? Maybe, but this does not account for the welcome to Ashkenazic, as well as Sephardic, Jews. Maybe Franco had Jewish ancestors? There's no proof of that. A political decision in case the Allies won? Perhaps, but in a country devastated economically by the Civil War, Spain gave much. One interesting suggestion is that because of the expulsion, and the concomitant absence of a Jewish population, Spain did not develop the kind of anti-Semitic attitudes seen in other European countries.

Whatever the reason, the fact remains that thousands owe their lives to an official blind eye, and open Spanish arms.

Alexy begins by explaining her quest, her need to understand her own family history that sent her to Spain, and to the New York archives of the American Jewish Joint Distribution Committee ("the Joint"), the organization that was responsible for helping stateless Jewish refugees in Spain. She interviews several people who found, or whose parents found, a haven across the Pyrenees, and in the section called "The Rescuers" she writes of those, Jews and non-Jews, who provided the means to safety. People such as Lisa Fittko, who acted as a guide, and Renée Reichmann, who from Tangier arranged material support, and Spanish diplomats who told the Gestapo, "these are our Jews" and taught the children a few words of Spanish in case they should be challenged.

The next two parts seemed to me as though they should be in a different book. "The Reformers" writes of present-day liberalization of Spanish laws and attitudes about non-Catholics (not merely Jews). It's interesting but although it touches on some theories as to why Spain helped, it is really more focused on the present and seems out of place.

The same is true of the final section, about contemporary Marranos and other "secret Jews". This is a huge topic about which a whole book could, and should (and probably has, I'll have to look) be written. In fact, the subtitle of this book suggests that that's what it's about. But it isn't.

Either this book should have been much longer, and made into a history of Spain and the Jews (and that would be a seriously long book!), or it should have been shorter, and the last two parts saved to become another book or books.

But those are quibbles. This is a fascinating, and very personal, discussion of an unexpected and little-known part of the Holocaust.
Show Less
5 more
LibraryThing member LeesyLou
A very interesting modern history of European hidden Jews. There is an especially compelling, interesting section on the history of Jews fleeing to Spain during the Holocaust and their fairly warm reception there due to a lack of anti-Seminism as a result of the absence of Jews in Spain since the
Show More
expulsion. Many issues and historically interesting points are raised that are not commonly found in other social or personal histories of the issue of hidden religious communities of the last 500 years.
Show Less
LibraryThing member drinkingtea
This book gives an interesting account of hundreds of years of history. While the subject matter would make the eyes of most of the people I know gloss over as they fall over in utter and complete boredom, anyone who has even a marginal interest in European history, religion, or social history will
Show More
enjoy this. The author is exploring her roots, but it's not an overly sentimental covered in molasses and honey while we look through the sepia tinted windows through the past kind of book. It chronicles the Jews who lived in Spain and the complicated/simple relationship today.
Show Less
LibraryThing member dickmanikowski
It just didn't grab me enough to compete with other books on my to-read list.
LibraryThing member laytonwoman3rd
Fascinating history of the "Secret Jews"--those who converted to avoid expulsion from Spain in the 15th century, and whose descendants even today are often reluctant to acknowledge or embrace their past for fear of persecution and prejudice.
LibraryThing member theballisflat
A very interesting memoir about the author's attempt to reconnect with her Jewish heritage
Fewer

Deborah, Golda, and Me: Being Female and Jewish in America by Letty Cottin Pogrebin
To Raise a Jewish Child: A Guide for Parents by Hayim Donin
Great Jews in Sports by Robert Slater
Jewish and Female: Choices and Changes in Our Lives Today by Susan Weidman Schneider
A Feast of History: The Drama of Passover through the Ages by Chaim Raphael
12 more
The Jews of Spain: A History of the Sephardic Experience by Jane S. Gerber
The Jews in Their Land by David Ben-Gurion
The Precious Legacy: Judaic Treasures from the Czechoslovak State Collection by David A. Altshuler
Finding God: Ten Jewish Responses ten Jewish responses by Rifat Sonsino
The Shtetl: A Creative Anthology of Jewish Life in Eastern Europe by Joachim Neugroschel
A Treasury of Jewish Humor: A Classic Collection of Humorous Stories, Satires and Witticism from the Rich Jewish Literature of All Times by Nathan Ausubel
Jewish Renewal: A Path to Healing and Transformation by Michael Lerner
The Abandonment of the Jews: America and the Holocaust, 1941-1945 by David S. Wyman
The Second Jewish Catalog: Sources & Resources by Sharon Strassfeld
Life Is With People: The Culture of the Shtetl by Mark Zborowski
On Being a Jewish Feminist by Susannah Heschel
A Certain People: American Jews and Their Lives Today by Charles E. Silberman
Fewer