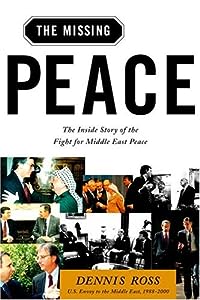 The Missing Peace: The Inside Story of the Fight for Middle East Peace

"In The Missing Peace, his inside story of the Middle East peace process, Dennis Ross recounts the search for enduring peace in that troubled region with unprecedented candor and insight." "As the chief Middle East peace negotiator for both George H.W. Bush and Bill Clinton, Ross came to be the lone figure respected by all parties to the negotiations: Democrats and Republicans, Palestinians and Israelis, prime ministers and ordinary people of the streets of Jerusalem, Ramallah, and Washington, D.C." "Ross tells the story of the peace process from 1988, when he joined the State Department under James Baker, up to the collapse of negotiations in the last days of the Clinton administration - an outcome that led Palestinians to commence a grisly "second Intifada" and Israel to wage a punishing military offensive in the West Bank and Gaza." "He takes us behind the scenes to see high-stakes diplomacy as it is actually conducted, recounting the round-the-clock summit meetings and secret negotiations, the stalemates and broken promises. And he explains the issues at the heart of the struggle for peace: border disputes, Israeli security, the Palestinian "right of return," and the status of Jerusalem. The Missing Peace explains why Middle East peace remains so elusive."--Jacket.… (more)

Myths and Facts: A Guide to the Arab-Israeli Conflict by Mitchell G. Bard
A History of Israel: From the Rise of Zionism to Our Time by Howard Morley Sachar
The Case for Israel by Alan M. Dershowitz
From Time Immemorial: The Origins of the Arab-Jewish Conflict Over Palestine by Joan Peters
Every Spy a Prince: The Complete History of Israel's Intelligence Community by Dan Raviv
10 more
From Beirut to Jerusalem by Thomas L. Friedman
In the land of Israel by Amos Oz
Personal Witness: Israel Through My Eyes by Abba Solomon Eban
Negotiating Arab-Israeli Peace: American Leadership in the Middle East by Daniel Kurtzer
Jerusalem: City of Mirrors by Amos Elon
Moshe Dayan: Story of My Life by Moshe Dayan
The High Walls of Jerusalem: A History of the Balfour Declaration and the Birth of the British Mandate for Palestine by Ronald Sanders
Chutzpah by Alan M. Dershowitz
The New Middle East by Shimon Peres
Arab and Jew: Wounded Spirits in a Promised Land by David K. Shipler
Fewer