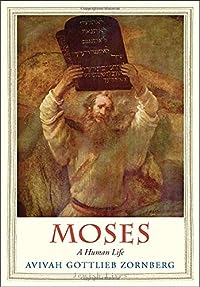 "Only Avivah Zornberg could tell the story of Moses in such a way as to situate him on the very cusp of the sacred and the human while showing how completely he participates in both. Only Zornberg has the prodigious scholarship to draw out from her sources the uniquely anguished and creative energy of Moses' life. In doing so she makes a plea for a Jewish ethics grounded in the outsider, the one who stutters and falls, while at the same time returning Moses as a fully modern prophet to the modern world."--Jacqueline Rose, author of The Last Resistance and Women in Dark Times.

LibraryThing member raizel
Brilliant, but (for me, only an amateur reader of literary commentary who has not read all the classics of English literature) tough going at times. Densely packed with insights, so occasionally rereading it to see more would probably be helpful. She includes a lot of Midrash and rabbinic
Show More
commentaries. The Introduction contains many of the concepts that she expands on in the rest of the book.

A few things I learned this time around. I hope Ms. Zornberg will agree with me:
* God wanted Moses to speak in his own voice when he returned to Egypt; having Aaron talk in his place meant that something was lost in translation (as it were). Even with Moses' stuttering and stumbling, his message would have been more authentic and, perhaps, better heard and acted on.

* When Moses pleads with God to let him enter Canaan, God abruptly ends the conversation. Zornberg asks why this is included in the Deuteronomy and suggests that Moses hoped, desperately needed, wanted the people to then entreat God to let Moses go with them. But he can't ask them to do this, the request must arise from them on their own or it is not sincere.

* Perhaps Moses smashes the tablets when he descends from the mountain and sees the people partying around the Golden Calf so that he is also guilty of disobeying God. When God then offers to destroy the people and start fresh with Moses, Moses can show that things would not work out any better because he is like the people.
Show Less

Groucho Marx: The Comedy of Existence by Lee Siegel
Biblical Images by Adin Steinsaltz
Rereading the Rabbis: A Woman's Voice by Judith Hauptman
Lioness: Golda Meir and the Nation of Israel by Francine Klagsbrun
Congregation: Contemporary Writers Read the Jewish Bible by David Rosenberg
3 more
Peninim on the Torah: An Anthology of Thought-Provoking Ideas and Practical Insights on the Weekly Parsha and Haftorah 9th series = by A. L. Scheinbaum
Jabotinsky: A Life by Hillel Halkin
Entering the High Holy Days: A Guide to the History, Prayers, and Themes by Reuven Hammer
Fewer